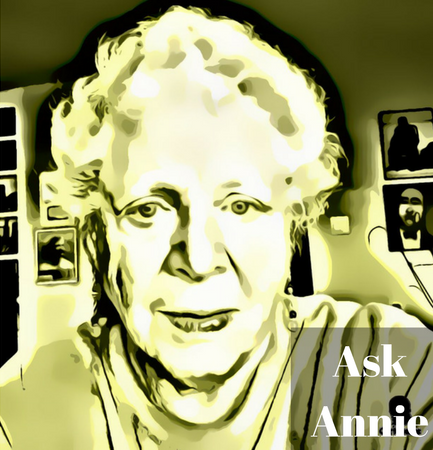 Anne Bernays has been a mainstay of Pangyrus since our launch–and a mainstay of fiction and non-fiction writing for decades.  Co-author of What If?, one of the most enduring texts in creative writing,  she’s helped countless writers succeed. In her new column she answers your questions about writing.

Please submit questions you face as a writer via email:  info@pangyrus.com


Plus:  Join as a Patreon subscriber, and you can ask your questions live during our next online video chat.

Q:
Dear Annie
Every time I start a short story the same thing happens: it wants to turn into a novel! Once I imagine the world and characters, I don’t seem to know where to start, or end, something that will feel complete in itself. Help! I don’t want every idea to turn into a years-long project.

Signed
In Need of Brevity

A:
Dear INOB:
A short story is one of the most difficult forms to bring off successfully. Every word must count. You must make the reader care. This means that you have to go straight to the heart of whatever matter you’re writing about. Since fiction is largely about what people do to each other–conflict, tension–you need at least two characters not of like mind. The stakes must be high for both of them. You must keep the narrative moving forward. This is like putting your foot down on the gas pedal when driving. It’s easy to stall.

The best way to learn how to write a successful story is to read stories by writers you admire and then analyze them. For me, his would include Graham Green, Eudora Welty, Ernest Hemingway, Deborah Eisenberg, William Trevor, and lots of others. “Best American Short Stories” is an excellent source of inspiration. Whose fiction you respond to is a matter of taste; if you don’t respond positively to a story everyone else seems to like, don’t worry about it. They like chocolate, you like pistachio.

It would be nice if there were rules for writing a strong story. Since there are no rules and almost anything goes, it’s entirely up to you to engage your readers’ emotions and intelligence. A story has to be plausible, but it’s not real life; it’s a transformation. If it were real life you would write it as non-fiction.. In a story you have to shape and distort life to fit your particular vision of it. You are all the old pagan gods put together. You make things happen.

When I started writing I was given this bit of advice: go ahead and write a first draft, then throw away the first page. Trust yourself.

Another tip about where to enter your story is that something substantial has happened before the first sentence of the first page. A man comes home and finds his family gone and all the furniture removed. Start the story as he opens the front door. The police call to report that a seventeen-year-old daughter has been picked up for shop-lifting again. Start the story with the mother or father answering the phone. You find out that one of your co-workers, the owner’s nephew, has been telling your mutual boss nasty, untrue things about you. Start the story as you get an email from your boss asking you to come see her ASAP. The event that happened before the story actually starts is the trigger for the action or dialogue to follow. This is a convenient guideline but it’s not a hard and fast rule. Another way to enter a story is to have the main character find or discover something awful or terrifying or sad or maddening. This is enough to jump-start the narrative motor.

The most difficult–and outdated–device is to go into a long backstory. One of my favorite stories is Tolstoy’s “The Kreutzer Sonata,” a tale about a man who gives his wife violin lessons only to realize that wife and teacher are having an affair. Tolstoy’s main character, the husband, is sitting in a railway train telling a fellow-traveler what happened at great length–more than forty pages. We don’t write that way any longer, probably because readers haven’t the time or patience to read extended back stories.

Styles of story-telling have changed. In the 19th and first half of the twentieth 20th Century short stories writers relied heavily on plot. After that stories became more “character-driven,” that is, the action proceeded from the main character’s temperament and mind-set. A man holds up a bank, telling the customers in line not to say a word or they’ll get shot. One man in line can’t help himself, starts mouthing off at the crook, gets himself killed (Tobias Wolff’s “Bullet in the Brain”).

How do you know when you’re at the end of the story? First of all, remember you’re in control. The ending of a story, like the ingredients of a cake, is as arbitrary as the beginning. For me, this involves two calculations. The first is that your readers won’t ask, “And then what happened?” They’re satisfied with the meal you served them. A story by the poet Muriel Rukeyser ended this way: the mother in the story asks her little boy, who has been plying her with all sorts of difficult questions, “Okay, what does a man have to get inside a woman with?” And the little boy answers “Love.” What’s left to write after that? This is one of the least sentimental stories I’ve ever read. Another way of deciding if your story is finished is to make sure you feel as if you had just sighed with deep satisfaction. A story is like a drop of oil, complete in itself. It’s over. And now you should be able to say in one sentence what your story is about .

Anne Bernays
Senior Fiction Editor at Pangyrus.com
Anne Bernays is author of 13 books, including Professor Romeo and Growing Up Rich, and co-author of What If?, one of the most widely used guides to creative writing. A teacher of fiction writing at the Nieman Foundation for Journalism at Harvard, she has published essays in The New York Times and other major publications.

Anne Bernays is author of 13 books, including Professor Romeo and Growing Up Rich, and co-author of What If?, one of the most widely used guides to creative writing. A teacher of fiction writing at the Nieman Foundation for Journalism at Harvard, she has published essays in The New York Times and other major publications.