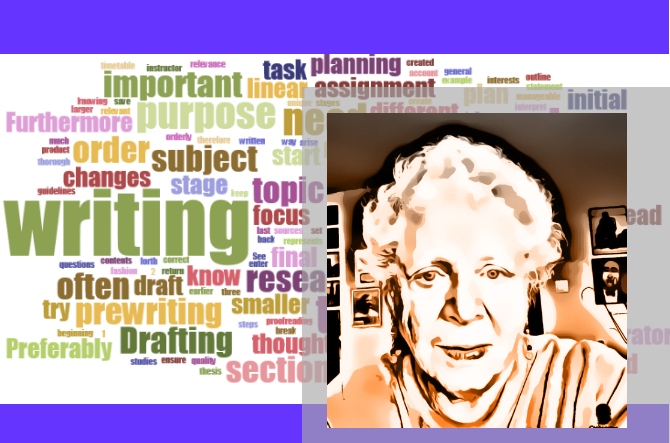 Anne Bernays has been a mainstay of Pangyrus since our launch–and a mainstay of fiction and non-fiction writing for decades.  Co-author of What If?, one of the most enduring texts in creative writing, she’s helped countless writers succeed. In her new column she answers your questions about writing.

Please submit questions you face as a writer via email:  info@pangyrus.com

The line blurs between fiction and non-fiction the closer you get to it, like an impressionist painting. Memoir, autobiographical novel–what’s the difference, and why is it preferable to publish as one or the other?

You have asked a vital, but vexed question. All fiction is in some respects autobiographical; the characters and situations emerge from the writers’ experiences, their own histories, what they read, and  their memories. Imagination then fuses and shapes these elements to create a story.

The notion of “preferable” may be misleading you.

Memoirs and autobiographies sell better than fiction. So that would be one reason to write your own story as it actually happened. On the other hand, you can make up anything you want when writing fiction. You can also get inside the heads of your characters in a way that’s mostly off-limits to the writers of non-fiction. Some readers decided that my  published memoir (“Back Then”) was largely invented  and that my fifth novel—“Growing Up Rich,” ninety per cent of which came directly from my pulsing imagination– was an autobiography.

Some novelists populate their fiction with real people. E.L.Doctorow is probably the most successful with  this  form. If you haven’t read anything of Doctorow’s try “The Book of Daniel.”  Doctorow took a real event—the executions of  Julius and Ethel Rosenberg for spying during the cold war—and focused on one of their sons, Daniel—half real, half fictional– as he tries to make sense of what happened to his parents. The Rosenbergs are real, the story of Daniel is the the novelist’s. I imagine Doctorow—who followed the book by several others in this mixed genre—wanted to explore the lasting emotional impact of the only American execution for spying that did not take place during wartime. Non-fiction wouldn’t have sufficed.

Then there’s the clever Truman Capote, who invented something called the “non-fiction novel” to label his book, In Cold Blood. I suspect he did this after he realized he needed some fleshly  incidents and humanizing connective tissue for what was essentially a bleak look at two murderers mouldering in a jail cell.  Somerset Maugham—a  novelist and short story writer unfortunately little read these days  but worthy of a much wider audience—wrote a delicious novel, Cakes and Ale,  a disguised portrait of Arnold Bennett  (called Edward Driffield) and of his first wife, Rosie, a spirited beauty who becomes the muse of several more artists. The straightforward plot takes Driffield from youth to old age. Narrated by a stand-in for Maugham, the book demonstrates in subtle but devastating ways, the folly and moral poverty of literary and social pretension. (One of Annie’s all-time favorite novels)

Joe Klein, a journalist, turned out a novel in 1996 entitled Primary Colors, a badly disguised depiction of the dicey adventures of a presidential candidate in almost every respect a stand-in for Bill Clinton. Klein got into legal hot water because of  this novel, which he denied writing for a several years after it was published. Clinton was an irresistible subject, a  scamp  begging for exposure. Klein made out like gang busters. Primary Colors was made into a gangbusters movie.

But most writers who set out to write an autobiography or memoir stick to the facts and most novelists don’t put real people in their work.

Back to your word “preferable.” I think you need to ask yourself “preferable to whom ?”  My answer is yourself. When you have a story that needs to be told, the internal pressure to tell it is as acute as hunger.

Memoirs are tricky mainly because you’re obliged to include details that, in fact, you cannot remember. So, for example, you remember you had a fraught dinner with your parents in the fall of 2004 that ended in your leaving home for good.  The setting is true, the parents are real, your emotions are accurately conveyed. But the contents of the meal itself? The weather? What you were wearing? In other words, the  “props” , the singular details of the physical context, need your imaginative help. The thing that matters most is the underlying  emotional impact and meaning of the encounter between you and your parents  at that dinner table on October 4, 2004.

If you decide that  the demands of memoir  are too restrictive for you to tell this story deeply and honestly, then turn your story  into a novel, where you will have much more freedom (and people are probably going to believe it’s all true anyway.)  In the end, the preferred vehicle for your story is your decision– unless of course you’re writing only for the big bucks.

Anne Bernays
Senior Fiction Editor at Pangyrus
Anne Bernays is the author of 13 books, including Professor Romeo and Growing Up Rich, and co-author of What If?, one of the most widely used guides to creative writing. A teacher of fiction writing at the Nieman Foundation for Journalism at Harvard, she has published essays in the New York Times and other major publications.