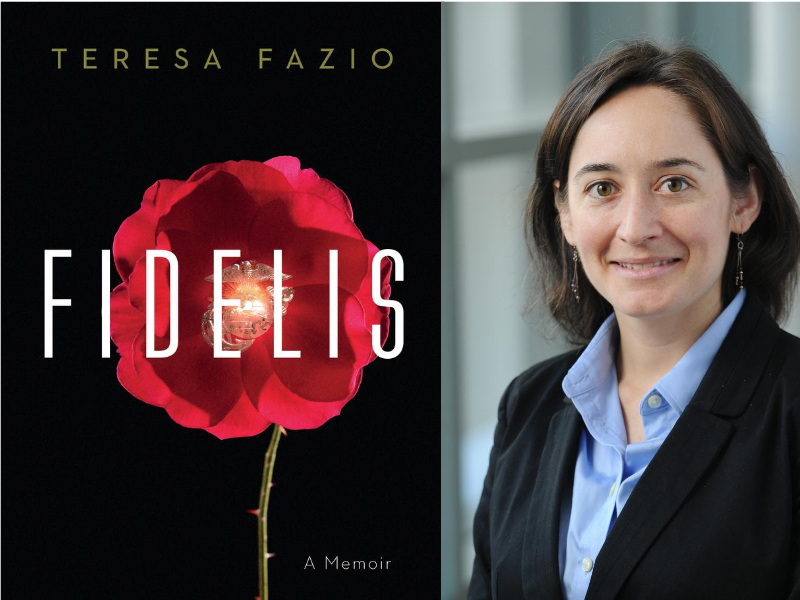 Teresa Fazio is the author of Fidelis, a memoir of her time as a Marine Corps officer and its aftermath. She joined ROTC when she was eighteen, in order to pay for tuition at MIT. She knew four years of service would follow graduation but did not imagine it would be in Iraq. Then 9/11 happened. Deployed to Iraq, Teresa was assigned as communications officer at a large air base situated between Ramadi and Fallujah. Competent and respected, she nevertheless wrestled with what it means to be a woman in the military, a struggle complicated by her affair with a married male officer.

Recently, Teresa’s articles and essays have been published in The Nation, Foreign Policy and Consequence Magazine, among other places.

We met when we were students in Bennington’s MFA program. Recently we got together on Zoom and later continued our conversation by email. Fidelis, published by Potomac Books, is available as of September 1.

Kathleen Stone: At the beginning of the book, you jump into a scene, without any backstory or narrative lead-in. You are in Kuwait, about to cross the border into Iraq, fearful about what is to come, and uncertain why you are there in the first place. You take the reader inside your head as you react to what is happening and try to manage your emotions. It’s a very immersive experience for the reader. How did you decide to start that way?

Teresa Fazio: This prologue stems from one of the earliest pieces of writing I did about that deployment, and throughout the drafting of the book, it remained one of the most visceral sections of prose I’d written about my experience. Those were the actual things I thought about upon crossing the line of departure into Iraq. Before delving into any of my backstory, I wanted to grab readers’ attention by showing them the dislocation and surreality of a young, naïve Marine experiencing a war zone for the first time.

KS: Also, early in the book, the reader sees you on the flight to Kuwait City, seated next to Marla, the other female lieutenant in your company. The flight attendant fawns over the two of you, calling you “princesses” and bringing you nice toiletries. Marla chats with the guy and happily applies the moisturizer but you swear under your breath. You’re a warrior and you don’t want to be singled out from the guys. It’s a rich scene that sets up conflicting ideas how women in the military view themselves, as well as giving the reader insight into your character. Long after, you continue wrestling with how you, as a female officer, should act. Could you say more about why this was such a troublesome issue for you?

TF:  In the gender binary of Western culture, warriors are coded male, and presenting as female makes others view you differently, even if you feel warrior-like. Many people make assumptions that women want to be treated softly, or to be afforded physical niceties that typical warriors aren’t. I didn’t want to be treated any differently than the men, but sometimes folks around me— occasionally fellow military members but more frequently civilians—would treat me differently. The Marine Corps is over 90% male, so a woman’s presence was such an oddity that some people couldn’t help but recognize it and comment on it. I didn’t want to be singled out as different; I just wanted to be part of the team, to do my job and get on with it.

KS: Other women have their own distinctive approaches. The staff sergeant at OCS, for instance, tells you and the other women officer candidates that there are three types of women in the Marine Corps – bitch, dyke and ‘ho. These are memorable words for the reader and undoubtedly for every female recruit who has heard that speech. Those categories seem to come from a male point of view. How much truth is there in what she said?

TF: This speech has been a rite of passage for generations of women Marines, and it stems from the Marine Corps’ male-dominated hierarchy. I don’t blame those instructors for internalizing the misogyny that resulted in those perspectives; it was what they had to do to survive—though unfortunately, women recruits are still on the receiving end of those attitudes. Clearly there is still work to be done in eradicating military misogyny. When I was a lieutenant, I thought I’d found—for a little while, anyway—a way around those three categories by acting like everyone’s sister, a familiar role because I had three younger brothers. I was used to telling boys slightly younger than me what to do, but in a way that referenced jokey cultural touchstones such as video games and web comics. Or if my troops gave any hint of a locker-room atmosphere, I’d reverse the genders; if they’d posted Maxim pinups, I asked where my shirtless David Duchovny and Heath Ledger photos were. (You can tell I came of age in the early-aughts). Many of my officer colleagues treated me as a younger sister, and because I was a junior officer at the time, and am fairly accommodating by nature, it went all right; I really did have a lot to learn. Looking back, though, I wish I had developed more assertiveness then, even if it had been uncomfortable. If I’d stayed in the Marine Corps and been in positions where I had to take more of a commanding or confrontational role, acting the way I did would not have gone nearly as well.

KS: While in Iraq, you develop a romantic relationship with a chief warrant officer. He’s married and twelve years older than you are. Not only is the affair against Marine Corps rules, but it conflicts with your personal standards. The relationship ends up complicating your life in ways you don’t anticipate. Now that the relationship is behind you, how do you think about your role in what happened?

TF: As I’ve gotten older, I’ve found new angles from which to view it. The #MeToo movement made me think hard about the relative power we each had; though technically I outranked him, he was much older and well-respected in our unit, with eighteen years of service. But do I feel he coerced me? No. In the end, I own my part in what happened, and take responsibility for my actions. I thought, at the time, the relationship was an opportunity for love and sexual power that—because it had to be kept secret—wouldn’t force me to show vulnerability in a place where vulnerability (especially the romantic kind) is a huge liability for a woman. This choice came, however, at the price of my personal integrity. And as I wrote in a recent article for The Nation, “If I’m completely honest, risking shame for an affair feels more satisfying than claiming victimhood, because it lets me feel a measure of agency.”

KS: While the military is unlike civilian life in many ways, some of the issues women face will be familiar to civilians, particularly those of us who have worked in predominantly male environments. We want to be respected for our competence, not noticed because we are women. But, in the end, we are women. Did you find that integrating different parts of yourself got easier with time?

TF: Yes, but for me it took a combination of getting out of the military and plenty of time: basically all of my five-year graduate program. I had to do a lot of personal work to separate femininity from weakness, because military attitudes, at least when I served, equated the two. I know there have been a lot of top-down efforts since then to make the military a more inclusive place, especially after the repeal of Don’t Ask, Don’t Tell— but plenty of work remains to be done.

KS: Several years ago, you were on a panel of veteran writers at the annual AWP conference. As I recall, you read an excerpt from one of your short stories.  Did you stay connected with other veterans as you worked on your memoir and how did they influence you?

TF: I was lucky to meet a fantastic community of veteran writers in New York City; at one point I was going to three veterans’ writing workshops a week. At first, I was terrified to expose my writing in a room full of fellow vets, because I knew they would call me out on anything that felt inauthentic. I also thought they’d judge me harshly for things that had happened during my deployment, but they didn’t, and the instructors were kind and helpful. For any aspiring vet writers out there, there are plenty of writing workshops geared specifically to veterans online and throughout the country.

KS: There is a rich literary tradition of war writing. We have writers like Tim O’Brien (The Things They Carried and Going After Cacciato) and Karl Marlantes (Matterhorn), both coming out of the American military experience in Vietnam. More recently, we have Ben Fountain’s book (Billy Lynn’s Long Halftime Walk), where he uncouples the civilian perception of soldiering from a young soldier’s actual experience in Iraq. Are there other writers I should include in this admittedly partial list?

TF: In the tradition of male war writing, I would add Phil Klay (Redeployment), Brian Castner (The Long Walk), Matt Gallagher (Kaboom, Youngblood and Empire City), and Brian Turner (Here, Bullet and My Life As A Foreign Country). Also, many women writers are working today.

KS: Right, you among them. In Fidelis, readers see you wrestle with what it means to be a young woman, only twenty-three, in a hyper-male environment. The gender piece of the story is inseparable from the military environment. Given that more women are now in the military, what other women writers should we be talking about?

TF: The universe has absolutely expanded with women’s contributions. Historically war writing has told only white, male, combat-oriented coming-of-age stories, but there is so much more to talk about. Brooke King’s gutting memoir “War Flower” came out last year. Kayla Williams’ memoirs “Love My Rifle More Than You” and “Plenty of Time When We Get Home” were some of the first from our generation of women veterans. Ryan Dostie’s “Formation” illustrates how the military fails sexual assault survivors, Anuradha Bhagwati’s “Unbecoming” shows the tumultuous birth of an activist, Tracy Crow’s “Eyes Right” offers a perspective spanning the 1980s and 1990s, and short stories by Jerri Bell cut close to the bone while often being simultaneously hilarious. I also thought the memoir sections of Kate Hendricks Thomas’ “Brave, Strong and True” did a brilliant job of illustrating how cleaving too closely to the Marine Corps’ “perfect warrior” mentality can backfire. And even that list is far too short. I think we’ll see plenty more publications by women in the coming years, and we definitely need more perspectives from veterans of color and LGBTQ veterans.

KS: So much to read! But back to Fidelis. Where do you see that fitting in the literary tradition of war writing?

TF: I think it expands the coming-of-age memoir category. It’s not your traditional combat story, and it features a protagonist who feels like she’s swimming upstream the whole time—first as a young tomboy finding her way in a hypermasculine military, then as a twenty-six-year-old veteran surrounded by civilians, all the while trying to make peace with femininity. 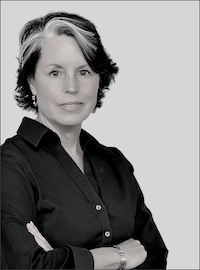 Kathleen Stone
Kathleen Stone is a writer and a lawyer. Her group biography of mid-twentieth century women with unusual ambition will be published by Cynren Press.