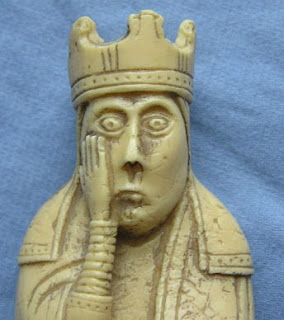 Saudi Arabia’s leading religious authority, Grand Mufti Abdulaziz al-Sheikh, last week put a fatwa on chess in advance of a tournament scheduled to be held in the holy city of Mecca.

To be sure, some of his indictments of the game have merit. For example, he calls it “the work of Satan,” and who of sound mind, from novice to master, could object, as in who but Lucifer himself could have cooked this game up?

(There is Intelligent Design, and then there is Malign Design. Chess, according to the Mufti, and others, and not without evidence, springs from the latter. It is also said that the Devil invented the violin. And conga drums.)

The Mufti argues, further,  that chess “leads to rivalry and enmity.” Losing in chess does indeed provoke anxiety and dire imaginings, suicidal and homicidal. This is BFS, Bobby Fischer Syndrome. And Fischer hadn’t even lost when he lost his cookies: the very thought of losing — losing, ever, again, even once— was enough to bring out all that was broken and bonkers in him, which was plenty.

Winning was all that could quiet him.

But I’m not yet ready to convert to the Wahhabi version of Islam (or, for some strange reason, any other version) despite the insights of the fatwa-hurling Mufti. I prefer to align myself with Muslim advocates of chess who have tweeted, contra said Mufti, that “chess is an intelligent game and that is why conservative clerics decry it.”

And there’s no doubt that the Mufti was talking about some other pursuit when he said chess makes “rich people poor and poor people rich.” Perhaps he was thinking of backgammon.

Islam has had a fruitful but conflicted relationship to chess. Muslims both brought the game to Europe — along with the works of Plato and some basics of arithmetic — and shied away from it. They authored the first serious studies of chess, but their tension about it extended to representation of the pieces.

Islam took the second commandment’s ban on graven images very seriously. Thus, on their chess sets, the horse, which we call the knight, was not allowed to bear any resemblance to an actual horse; it had to be represented abstractly, by means of an assortment of holes poked into the exterior. Same with the elephant. (Yes, the elephant was once an active piece: Chinese chess, xiangqi, is known, for short, as elephant chess). As for the queen, well, she was no problem for Muslim chess, since there was no queen. There is no queen in Chinese chess either. Make of it what you will, the queen is a European innovation.

It should be said that these abstract Islamic chess pieces are beautiful, in an unexpectedly modern way.

Islam still argues with itself about chess. Chess once stood for Enlightenment reason as opposed to clerical and feudal rule. The Cafe de la Regence was a place where Ben Franklin might be found playing, along with Jean-Jacques Rousseau.

The Saudi/Wahhabist monarchy still contends with a contemporary version of the Cafe de la Regence.

Alas for the Saudi/Wahhabist monarchy.

Harvey Blume
Harvey Blume is an author (Ota Benga: The Pygmy At The Zoo, 1992), free-lance writer and critic, who hails from the other Brooklyn, the part they haven't branded yet.In the photo, he's on the right, his grandfather (who commuted to the Manischewitz matza factory in New Jersey) in the middle, his brother, Marvin, on the left, in Williamsburg, back when Williamsburg was overflow from the Lower East Side, and nothing artisanal about it.