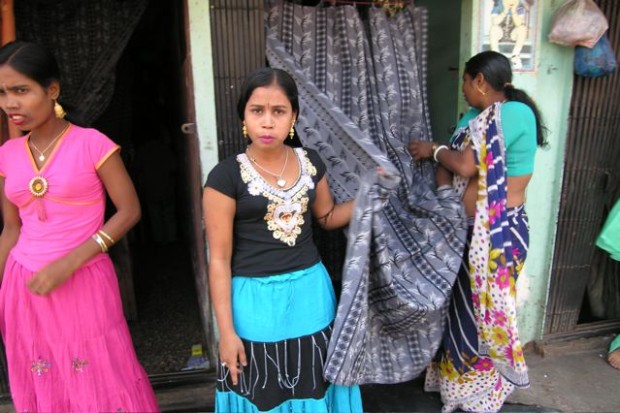 Reporter’s Notebook: Inside the Brothels of Mumbai

I am seated cross-legged on a brothel floor on a hot April afternoon. The door is ajar. Just beyond it, a disheveled man in a grey pinstriped shirt appears at the top of the dank staircase, ducking to avoid banging his head on the low ceiling. The hinges creak as he slips in.

“Lata has gone back to the village,” says Roshni, a chatty woman with bulging hips who, now in her thirties, has risen up the ranks to become the keeper of this three-room affair. “But you can sit with Payal if you like.”

To sit, baithna in Hindi, is a euphemism sex workers use.

The man looks at Payal, plopped on a bamboo mat on the floor beside me, the ringlets in her hair escaping from a loose bun. He hesitates. Payal remains silent, expressionless, tuned to the 14-inch TV on the wall rather than the prospective customer.

His eyes flit from her to me. He shakes his head no and slinks back down the stairs.

My obviously alien presence embarrassed him, I know. He was squeamish about buying sex while an outsider watched.

I’m torn between satisfaction my interview wasn’t interrupted and guilt over depriving Payal of rare afternoon business. I am no longer naïve enough to believe I’ve saved her from the indignity of selling her body.

Roshni resumes narrating the story of how she ended up in Mumbai. The burn scars on her upper arms mark when her husband doused her with a pot of boiling mutton stew. Roshni demonstrates how she had been curled up at the time, “with my legs like this, held against my chest,” she says. “It’s a good thing or I would have gotten completely burned. I’d just had an operation to stop myself from having babies.”

Roshni left home that day with her two young children. For hours she walked along a country road because she couldn’t bear the humiliation of sitting on a bus reeking of mutton stew.

At her parents’ house, the husband of Roshni’s older sister tried to sleep with her. She left and found a job as a maid at a hotel. The owner tried to take advantage of her. She accepted a woman’s offer to work at a cotton shop in Mumbai. It turned out to be a brothel. But by the time she realized she’d been tricked, it was too late. Roshni had children to feed, whether by working loom or loins.

Roshni’s story is hardly unique. In dozens of interviews with sex workers and their children, almost all have told me stories of absent men — usually dead fathers or drunk, abusive husbands — illiteracy, and no decent jobs. In addition to their own sustenance, a great many are responsible for their elderly parents, daughters, and sons.

These tales are brutal, but from each I try to glean insights that might help me diagnose why sex work is so rampant and devastating in India.

Besides the mental strain, reporting from Kamathipura poses another challenge. I am an outsider. I must be careful. When I visited the brothels as a college student, the field workers of the NGO I volunteered with never left me alone. A young woman, fair and tall, they told me, would attract curious and lewd stares from pimps and johns. They sought to avoid trouble.

When I decided to return to Kamathipura more recently as a reporter, I still didn’t feel comfortable walking around the area and going into the brothels completely alone. I came to an arrangement with a community organization in the red-light district, a federation of sex workers called Asha Darpan. They allow me to come to their office — a hole in the wall sandwiched between a shoe-repair store and a vendor of fried snacks — and I accompany the staff to brothels for health check-ups and to distribute condoms. I tell them where I will be and am free to speak with whomever I want. They pick me up when it’s time to leave.

From noon to 7 p.m. — when dhandha, or sex work, is slowest — I do my reporting, armed with a notebook and recorder, dressed in my baggy, washed-out salwaar khameezes. Sometimes the sex workers running the organization interrogate me for a while first. They are understandably perplexed by my endeavor. My home, an eight-minute train ride from theirs, is as foreign as another planet. It can be exasperating trying to explain what the heck I am doing here.

Roshni, at the end of our interview, asks the usual dreaded questions. Why are you writing all this down? What are you going to get out of it? I stumble to convey how I desire to be the sort of reporter who doesn’t just chase the news but tells the stories of people without a voice, without recourse.

But Sailesh, a transgender sex worker and peer counselor at Asha Darpan who has come to collect me at the end of my visit, cuts me off.

”What line? I wonder.

“She,” Sailesh motions to me with his chin, “is from the family line.”

The family line. I never thought about it that way before. But the phrase makes sense in the context of a group that feels shunned by India’s intractable notions of family values and rigid morality. I belong to a different “line,” not only because of socioeconomics but because of my ability to have familial relationships instead of transactional ones, dhandha.

This essay is excerpted from the single ‘Daughters of the Red Light: Coming of Age in Mumbai’s Brothels’ and has been previously published by the Harvard Kennedy School Review.

Shanoor Seervai is a Master in Public Policy student at the Harvard Kennedy School of Government, where her research focuses on child and youth protection in the ongoing refugee crisis. She is the Editor-in-Chief of the Kennedy School Review and a Freedman-Martin journalism scholar. Before coming to HKS, Shanoor reported for The Wall Street Journal in India.

Shanoor Seervai is a Master in Public Policy student at the Harvard Kennedy School of Government, where her research focuses on child and youth protection in the ongoing refugee crisis. She is the Editor-in-Chief of the Kennedy School Review and a Freedman-Martin journalism scholar. Before coming to HKS, Shanoor reported for The Wall Street Journal in India.