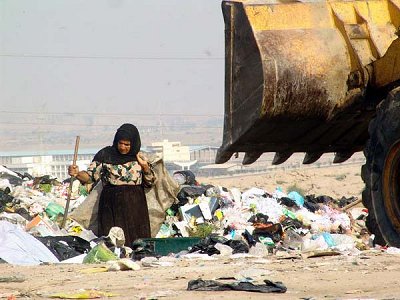 Published in conjunction with The Kennedy School Review:

Sendhil Mullainathan had studied poverty for years, and something haunted him in nearly every study. Born into a small rural village in India, the Harvard behavioral economist and winner of the MacArthur Fellowship—commonly known as a “genius grant”—was inherently skeptical of the narrative that the poor somehow deserve their lot due to a lack of discipline. But the data seemed to confirm that story.

Mullainathan found that the poor repeatedly kept falling short, even with the simplest of treatments. Nearly costless behaviors—such as regular adherence to a simple drug treatment, parenting tips, and weeding that could substantially improve the yield for poor farmers—had been shown to make life much healthier, more productive, and more lucrative. But consistently, the poverty of a person was significantly correlated with how well that person adhered to the behavior. The poor were simply less likely to keep up.

It was evidence that fit perfectly into a strong strain of American philosophical thought on the poor. A free society, the laissez-faire advocate proclaims, inevitably sorts socioeconomic status through the sift of effort, and the poor stay poor because they succumb to a culture of poverty that encourages dependency while disowning initiative and private responsibility. Even when handed the simplest paths out of poverty, this school of thought argues, the poor are unable to take the first step.

But what if the causal arrow flipped? What if economic insecurity was not the result of a “culture of poverty”, but rather its cause? What if the poor had a harder time taking advantage of these interventions by the mere fact of their poverty?

Mullainathan had a good deal of research to shed some light on the question. In one study, Indian sugar farmers were given a basic cognitive test (known as Raven’s matrices) and a test of their ability to control cognitive processes, or executive control test (known as the Stroop test) before and after their harvest. Sugar farming, like most farming, has a single annual harvest that instantly raises a farmer’s income – lifting many farmers and their families immediately out of poverty. Unlike most farming, though, the harvest occurs at random intervals throughout the year. Therefore, Mullainathan and his researchers could observe how a change in income affected a single farmer independent of the time of year. In other words, whatever effects they found could be attributed to the harvest itself, not the time of year the harvest was made.

They found that income mattered. Farmers performed much better on both tests post-harvest than pre-harvest. But the scale was shocking. Pre-harvest, they performed an average of 25 percent worse on the cognitive test. On the executive control test, they were 11 percent slower with 15 percent more errors. It was the equivalent of a drop of nine to ten IQ points.

Mullainathan catalogued these devastating effects in a book with Eldar Shafir of Columbia University in their book Scarcity: Why Having Too Little Means So Much. Deprivation, whether from food, companionship, or money, causes significant psychological effects. It leads us to focus on what we lack; lonely people, for instance, are consistently found to be uniquely perceptive to social cues. It causes us to tunnel and ignore anything not directly related to our immediate scarcity; individuals taking payday loans, for example, are much more sensitive to immediate monthly bills than the effect of high interest rates on future months’ bills.

A lack of resources also causes us to perform far below our mental potential; Shafir and Mullainathan discovered this drop occurred even in short-term tests where scarcity was simulated in a video game. Scarcity makes it harder for us to perform at our best, which can compound scarcity. And the most devastating species of scarcity is that which determines most others—poverty.

To some, this may seem irrelevant in the United States. Yes, poverty can make it harder to escape poverty, but an individual has a choice. Certainly at some point their fate was within their control.

Unless they were born poor.

If you took the entire population of New York City and doubled it, essentially stacking one New York on top of another, you would have roughly the number of children who are in poverty in the United States today. That’s 16.4 million children or nearly one in four at any one time. And fifty percent of American children will have gone on Food Stamps at least once before they turn twenty.

Children have had no choice over the matter, and they are not immune to the effects of poverty. As journalist Paul Tough chronicled in his newest book, How Children Succeed, stressors in a child’s early development can have devastating impacts on their cognitive development and achievement. And the weight of poverty is a thumb on the scale of future earnings. Not surprisingly, these stressors depend largely on the type of community in which a child grows up.

A recent team of researchers has begun to identify some of those communities. The Equality of Opportunity Project, a joint effort by the federal government, Harvard, and UC Berkeley, looked at where children born into the bottom half of income distribution ended up in their future earnings across the United States. The researchers found that while economic mobility in the United States has stayed relatively constant over the past thirty years (and is lower than in most developed countries), it can drastically differ depending on where you live.

To find why there were such stark geographic differences, they identified a few factors. Areas of low mobility, as seen on the map below, are segregated by income and race. They also found that places had higher mobility when there were better schools, more people involved in social activities and organizations, and more stable families. 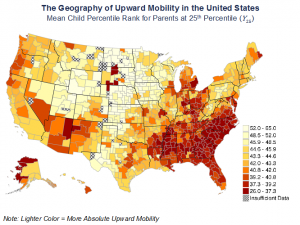 These gaps have not occurred naturally. They result from policies that have isolated communities in poverty and choked off public support. Policymakers failed to protect homebuyers in many of these communities from predatory lending and landlords.  Schools are still supported mostly by local property taxes, meaning that schools in wealthy districts have more funding than those in higher-need districts. And public investments in highways and interstates combined with a lack of similar investments in public transit have made it much easier for wealthy residents to move out of city centers and leave pockets of concentrated poverty.

Researchers like Harvard’s William Julius Wilson have detailed the effects of this isolation in their research on what is termed the “American underclass.”  The children in this American underclass are stuck in concentrated poverty, they are disproportionately black, and they are receiving, at best, marginal consideration from policymakers. They may continue to live in poverty for decades to come.

Poverty is not a blameworthy condition – not an indication of some failure of individual initiative or self-discipline. As the research shows, it may just be the fact that some of us are born into poverty in the first place.

This article is the product of a collaboration between Pangyrus and the Harvard Kennedy School Review.  For more information, visit harvardkennedyschoolreview.com.

Photo: “Poverty” by Amir Farshad Ebrahimi , licensed under CC BY 2.0

Brian Chiglinsky
Brian Chiglinsky is a 2014 Master in Public Policy graduate of the John F. Kennedy School of Government at Harvard University. He works at Hunch Analytics and lives in Washington, DC.
Latest posts by Brian Chiglinsky (see all)
Advertisement