Holobiont. Agustín Fuentes gave me this new word at the beginning of the New Year, during the On Being podcast with Krista Tippet titled “This Species Moment.” Here is what he said:

“The holobiont . . . this is this basic concept, that organisms are, ourselves, things, cells that are made up of our own DNA and proteins and all of that — plus thousands, tens of thousands, maybe hundreds of thousands, of other organisms and their DNA, simultaneously. So we are ourselves ecosystems . . . the idea that these holobionts move around in the world, interacting, shedding, sharing, overlapping, fusing — it sounds like a science fiction movie.”

What a concept! A new way of seeing, of being, of defining my space and place in this world. A new way to think of myself, not defined by inches or pounds, or by my blood type or my DNA. Not defined by my external age which so poorly reflects my inner age. I am still so young on my journey towards selfhood, or otherhood, or wholeness, or Holiness.

As a Holobiont I am a composite of microorganisms, of memories, of enculturation, of habit. I am connected to the Holobiont of others — sharing their air, their organisms, their thoughts, their feelings, and their lives. Most of the time I coexist peaceably. But sometimes conflict erupts — my gut rebels against me, or I rebel against others.

I am still filling in holes in my being. As a writer I work to string things together, to fill in the gaps of my understanding. Every time I question the meaning behind something I can come up with many different answers and sometimes make space for them all to coexist.

Holo… whole, holey, holy… Sometimes the holes, the missing parts, add up to the whole and there is a sacred mystery about it — the silence between the notes, the darkness separating stars. To take that all in and discover that it is more than just the sum of its parts is a step towards a Holo-understanding, a Holo-cognition.

Apoptosis was another word that opened worlds — a scientific word describing the process of programmed cell death that exists in all living things. This word offered an explanation of why we cannot live forever, why our Holobionts ultimately fail. Most of the cells in my Holobiont die and are replaced — from the fast gut and skin cells to the slow bone and brain cells. I am interested in the process of continual cellular rebirth, the daily reincarnation of most of our being. Every morning our brain rises from the death of sleep to alertness. The Buddhist concept of reincarnation into other beings is not so far-fetched in this framework. We are born again, and again, and again. Starting over and over and over.

Westerners often prefer things to be concrete and not abstract. The mystery of death is frightening. We cannot control what we do not understand. We like to be in charge of the whole.

My physician husband John once came home and shared an interesting patient encounter. “Interesting patient encounters” are often defined by: making a difficult diagnosis that makes you look good; seeing something you have never seen before; having an emotional exchange that breaks through your clinical straitjacket; or feeling angry at something beyond your control. Sometimes it is something that makes you question your assumptions.

A family had brought in their child with Batten’s Disease, an inherited retinal and neurological deterioration leading to blindness and early death. This child’s Holobiont was doomed by a small genetic code change. A spark dropped on a dry forest floor. It is a horrible diagnosis, but genetic counseling and testing can sometimes avoid having an affected child. John sat down with the family to break the bad news and explain the diagnosis and its ramifications. The family listened calmly.

“Oh, we know that,” the father reassured John when he finished. He explained that they knew their family carried this gene and that marrying his cousin had increased the chance of having an affected child. It was an outcome they were willing to accept in service of preserving the family wholeness — the Holobiont of their clan and community. Their culture put clan over individuality, community wholeness over a single person. This is almost always viewed in our westernized medical world as a poor choice. An uneducated choice. An avoidable choice. And yet, it makes me think.

I think about the beautiful family I saw on a medical mission trip. Another boy with an inherited neurological disorder. This boy had made the news in Bolivia at the time of his diagnosis because of the rarity of the condition. Being newsworthy in medicine implies either very good or very bad news. His was bad. They came wanting more information about how they could help their beloved child. It was probably the same reason the other family had come to see John. They knew there was no cure, but tugged at any nibbles on the lines of hope cast out from their doomed liferaft.

We sat in the small room set aside to examine the kids. The well-dressed young parents handed me the thick medical chart they had brought with them. I flipped through, looking for English signposts to explain what was causing this boy’s obvious delay, the awkward wide-based gait, the tremor of his hands as he reached for a toy, the saliva that slipped out of the corner of his five-year-old mouth when he slowly smiled. I finally found it — Pelizaeus Merzbacher Disease. A beautiful phrase with which to nail a coffin closed. A fatal mitochondrial disease passed on through the Holobiont of the mother to the boy, first incorporated into her DNA as a bacteria so far back in the genetic code that the word generations may not apply.

I set aside the chart and put my hand on the mother’s hands clenched tightly together in her lap.

“I’m sorry,” I said as tears welled in my eyes. “I don’t think there is anything else we can offer now.” The parents leaned into each other in shared grief as they felt the taught line of hope going slack again. As I gave them time to absorb this new disappointment I watched the older sister entertain the boy. She picked up a pink rubber pig from the cardboard box holding my equipment and showed it to him, speaking with a soft high voice as though to an infant. He watched her and smiled, wobbled a bit in his chair, and reached to pick up a yellow chicken toy from the box. The dark waters of their journey suddenly glowed with bioluminescence. Life manifesting itself through love. Flashes of wonder if you take the time to look for them. This family Holobiont was well and thriving. The weakness of one member, the betrayal of one mitochondrion would not be their downfall. This girl would grow up with a level of compassion that would ripple through the Holobiont of her community, and balance the sacrifice of this boy. With a full heart, I turned to offer another hope, another tug on the line.

“New gene therapies are always being explored, and something may come up to help your son.”

Then I added the most important part. “Alejandro is lucky to be in such a caring family who can give him the best life possible. He is blessed to have this beautiful sister and both of you as parents.”

The mother knew the painful truth that the defect had come through her. Earlier she had worriedly asked me about trying to figure out why she had the problem in her genes.

“It doesn’t matter how it happened.” I tried to reassure her. I realized my medical authority gave me zero ability to advise her on her personal journey of suffering, but I would give what I could.

“What is important is that you love him and take care of him as much as you clearly do.”

She smiled weakly through her tears.

I sent them away with a small consolation prize — a prescription for new glasses which they could easily afford to buy in an optical shop. Later in the day, I was surprised to see them waiting their turn just like everyone else to get a second-hand pair from the donated supplies. The people in line with them were enjoying watching the children play. The parents saw me, smiled, and thanked me again. I was reminded that the value of a gift does not lie in its cost or scarcity, but in the intent of the giver, and the hidden hole in the recipient that the gift may fill.

Holobiont. It’s a good word. I like it better than apoptosis.

Image: by Sangharsh Lohakare on Unsplash, licensed under CC 2.0. 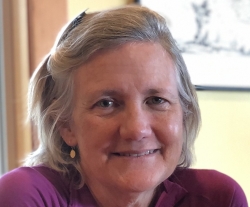 Ann Stout
Ann Stout is a pediatric ophthalmologist, a member of the Writer’s League of Texas, and the Retired Physician Writers Group. Her essay “Two Eyes are Better than One” was published on Doximity Op-Med. She used to operate on patients and fix their double vision. She suffered a retinal detachment in one eye and now has double vision herself, the kind for which there is no fix. She is writing a memoir about the experience of vision loss as an eye doctor and hopes to find and bring healing through her writing, so others will not feel so alone.