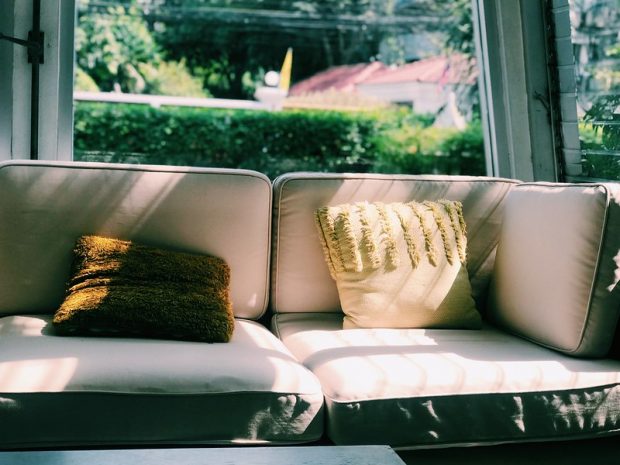 Essay & Memoir, In Sickness and In Health 0

Love in the Time of COVID

Our little mid-century ranch, with its limestone exterior and big picture window, sits clustered together with other mid-century homes—tri-levels and A-frames—in a neighborhood that straddles the bustling city limits and acres of farmland that stretch out across rural Delaware County, Indiana. This proximity to civilization, yet freedom to get lost on a back road, is what drew my husband, Cory, and me to the house when we bought it in 2005. When our realtor walked us through we whispered into each other’s ears about backyard picnics and late-night escapades with glasses of wine. The real selling point, though, was that big picture window in the front room and the way it scattered morning sunlight across the pine-wood floors.

A few months after moving into our new house, I took a job an hour-and-a-half away which meant I had to get up at 4:30 every morning to make the commute. I didn’t return until 6:30 each evening. Not long after that, Cory decided to explore his passion—medicine—and went back to school. As each year passed, we celebrated milestones in our life: Cory’s graduation and job placement in an ER the next town over; my founding of a storytelling nonprofit and its show on NPR. Our life was late nights in hospitals and studios and grabbing dinner on the go. We had promotions, and speaking engagements, and work travel, and even more travel on top of that. While our life felt exciting, we saw less and less of each other; and those backyard picnics became something of a distant memory. Our mid-century with its big picture window and sunlit wood floors had become only a place where we slept and showered.

The nights Cory and I found ourselves home together we sat at opposite ends of the couch and scrolled through social media, interacting with the devices in our hands but not with each other. Post after post, meme after meme, all seemingly about why a Democrat shouldn’t be trusted or why a Republican should be hated. Threads of arguments and infighting within parties between moderates and progressives; but no common ground. Facebook and Twitter had become cesspools of the divides in our country and yet we couldn’t stop watching, as tiring and stressful as it had become. This was downtime in our house.

As January 2020 approached, we had our calendars filled through September, and I cringed anytime someone reached out about getting together. Trying to find the time to fit one more thing into our already busy schedules seemed offensive. I often found myself frustrated with friends and family and thinking: Why can’t people be better planners?

And then COVID-19 happened.

Like the rest of the U.S. we saw images on the news from China, and read stories of despair as it crept into other parts of Asia; but somehow we thought we were immune. We went on with life as if a pandemic couldn’t happen to us. In late February I spoke with a group in Tennessee about an upcoming appearance, and there was no talk of the virus or even the possibility of postponing or canceling. Then we finally woke up. Was it the videos from Italy begging us to take this seriously? Was it the surge in New York?

I still don’t know when we recognized this was real, other than one by one in the days that followed I erased our lives from the calendar. The speaking engagement in Seattle, gone. The trip to Cyprus, bye-bye. My niece’s bridal shower, auf wiedersehen. The research travel for my book, kaput. We suddenly had nothing through July.

At first I was depressed. I threw the covers over my head and cried. I gripped our sheets between my fists and screamed. Then guilt set in because people were losing their businesses, others were dying, and we were healthy. The virus hadn’t touched anyone we knew and we both still had our jobs. I pulled the covers from my head.

“Am I being selfish?”

Cory rubbed my back to console me. “It’s okay to be sad about your losses, sweet pea.”

I spent the rest of the night at the intersection of grief and gratitude.

The next evening we began to binge everything we could find on Netflix and Hulu. We’re now on week seven of isolation. Between episodes of Ozark, we take breaks and check our phones. I scroll and see posts from old friends—those whose feeds were once on opposite ends of the political spectrum from my own—who now binge the same show. I leave comments about predictions but ask for no spoilers. Cory and I settle back into the couch, our feet finding their way toward each other under the blanket, and we click the remote to begin the next episode. After a few, we turn off the TV and stay up late talking.

In the mornings I sip my coffee in the front room and watch the sun trace shadows across the pine-wood floor until the entire space becomes a theatre of light, and then I check email for a bit. In the afternoons we walk our dog around the neighborhood, and yell out across the street at our neighbor who’s enjoying the smells of spring from the safety of her opened garage. We’ve finally taken drives on those back roads.

Life has slowed and I wonder what of our newfound habits will remain. We’ll get back to our commutes, our speaking engagements, our travel. This won’t last forever; yet I’m already beginning to mourn the loss of this way of living. I hope future me says no more often to needless opportunities that fill our calendar; that I still call my mom and dad each day to talk about movies and the grocery store; and that Cory and I still tangle our feet together in the evenings as we binge another show.

Yesterday we cooked dinner and made a picnic in our backyard. Cory shook a fleece blanket in the air and let it drift to the ground; I placed the food in the middle. We sat together, no one else in sight other than a few robins singing in our budding oak. After we ate, we held hands and took in the sounds of our neighborhood: mowers buzzing in the distance; barking dogs; kids laughing. I opened my notebook to scribble a few words about the moment and saw something I had written last fall after visiting the Mediterranean:

Though we may try to turn the tides of time in one direction or another, we must live in the now and learn from its lessons.

I looked around at our fenced in yard, our little mid-century ranch with its limestone exterior, at my husband. This life is enough.

J.R. Jamison
By day J.R. Jamison is a founder of The Facing Project, a national organization that seeks to create a more understanding and empathetic world through stories that inspire action, and he co-hosts The Facing Project Radio Show on NPR. He believes that stories are the most important and powerful tool we have for change.

By day J.R. Jamison is a founder of The Facing Project, a national organization that seeks to create a more understanding and empathetic world through stories that inspire action, and he co-hosts The Facing Project Radio Show on NPR. He believes that stories are the most important and powerful tool we have for change.