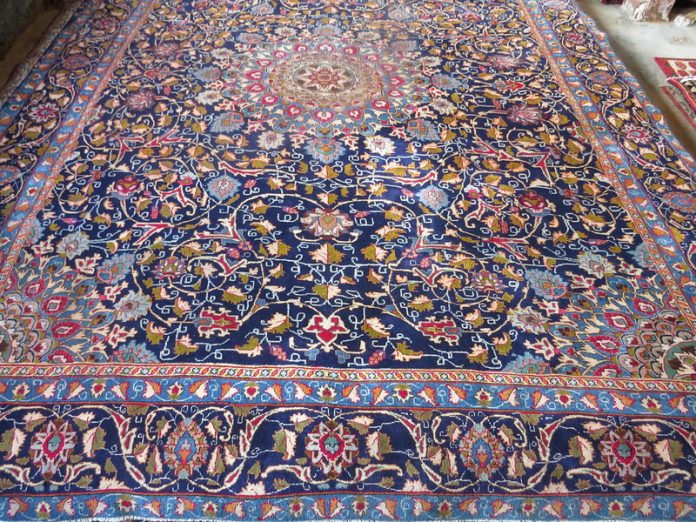 I was at my sister’s house and received two phone calls from my father urging me to come right away. My chest was warm with anger. To be pulled away on Christmas Day. Still, I was the only one able to easily get to him. In 2018, this was the kind of rescue mission I had become familiar with, and it was the kind of persistent need from my father that fueled a lifelong strain on our relationship.

“Ok, this will be tricky,” I said. I squatted on the wooden floor, worn and exposed, and tugged at the edge of the rug. “We can do this.”

My father’s wheelchair sucked up the beautiful Persian rug like a vortex. Me, my father, and the Persian rug in an impossible tangle. I directed my father to move backwards by pressing the motorized lever, but I heard only the whir of the motor. I figured the back wheels needed untangling first.

“Dad, go forward, I think I can tug this section out.” I tried to pull the rug from the smaller back wheels but the chair was too heavy. My father, the rug, and I were knotted together, ensnarled with no way out.

My American mother and my Iranian father fell in love in graduate school in the States and got married. In spring of 1970, they decided to accept my father’s San Jose job offer over the offer in Tehran. But that was before they went to sleep. When they woke up, they decided he would take the job in Iran. This decision would affect the family in unknowable ways. It would profoundly impact my identity as an Iranian and build distance in my relationship with my father.

One summer day, in the city bazaar in Shemran, they went to see the rug vendor and bartered over three rounds of tea chaee. My father, an experienced businessman, likely negotiated a good deal. I was in my mother’s womb as my parents set up a home in an upper-middle class neighborhood and unrolled the beautiful rug. The rug was a showpiece; its colors so rich they seemed to leap off an artist’s palette. The blue background, deeper than the ocean blue. Flowered vines in red, yellow, and green. Marked with a golden double border. A nine-by-twelve-foot rug, made from wool threads, knotted by hand, and cut short. Soft to the touch.

I remember our backyard in Tehran: fruit trees tended by our gardener, sweet, soft figs in my small fingers, tadpoles swimming in a pool. In a photo, I am in the yard wearing a soft great grandmother-made-sweater in bright red yarn trimmed in white. I am flushed and bare a toothy smile, on the edge of a giggle. My father is behind the camera. Perhaps I liked the silly thing he said. I know I see warmth and affection between us that day; I see it in my face. Surely, he was a devoted and present father. At least he was then.

Childhood memories are clear: the smell of rosewater ice-cream, the sweetness and texture of halvah, the cucumbers from the fruit bowl, driving on winding roads with family to a picnic spot to celebrate the New Year Noruz, shopping for pomegranates and persimmons in a bustling bazaar, a chorus of honking cars with no mercy for pedestrians, the warmth from stone-bread noon e sangak, sold fresh from the oven. Our patio where we slept under mosquito netting on warm nights and where the rug was shaken out for some fresh air.

We were separated from the treasured family rug for over ten years. When the post-revolutionary Iranian government allowed it, the Persian rug, by way of a cargo ship, arrived in Boston Harbor and unrolled again, this time in the living room of our small ranch house in Lexington, Massachusetts. We reunited with the rug, but our lives in America were forever marked by separation and loss.

A revolution had been sparked and by December of 1978, millions of Iranians were protesting and demanding the removal of the Shah. Five brown-hued photos in my family album document large student protests: a sea of heads, citizens who want a more progressive Iran.  Americans in Iran were feeling unsafe and my mother, sister and I had no choice. Quite hurriedly, we boarded a Pan Am plane to Dulles International Airport in Washington D.C. I always ache to remember we had no time to say goodbye to friends. My father, a production manager who oversaw hundreds of workers in a compressor factory, did not come with us. Perhaps I asked daily for my father. Or maybe adjusting to a new school was enough for an eight-year-old to manage. Either way, the distance between us began to grow.

In 1980, my father left Iran and we were reunited in Virginia. We moved into our own home where life was as normal as it could be for our uprooted family. Perhaps my father came to school concerts and teacher conferences, but I don’t remember it. I rely on photos to recall this phase of our lives; my father appearing as a strong presence, tall, and capable.

My father had an engineering degree and strived for a better income to support the family, so he decided to go job hunting in Boston. He contracted a virus in the frigid Boston winter. My mother told me later, when I could understand, that the doctors said he might die and they had no idea what was wrong. He was eventually diagnosed with spinal meningitis, paralyzed from the waist down.

My father made some health gains over the next fifteen years. After the wheelchair, he graduated to a walker, two canes, then only one cane.  We stayed in the Boston-area, in Lexington. He opened a travel agency. In rare moments he stood on his own.

We managed as a family, but my father’s illness was devastating. He no longer fully supported the family financially. His body was severely compromised, but his spirit remained strong and willful. I studied my way through junior high and high school. After college, I moved back home after a job loss. My mother filed for divorce and moved out in 1996. As my father’s health declined in his late seventies, his medical needs and concerns overwhelmed the family. He was transported by ambulance when he fell and broke his hip, he felt weakness caused by pneumonia, and suffered another fall and broken leg, to name a few. Things were not going to get better from there.

I moved out after ten years of living with my father. My sister and I shared responsibility for his hospitalizations, errands, doctor visits, coordinating home care, and on and on. He was hospitalized again for urinary tract infections, erratic blood pressure, and another broken leg.

I would prepare my father’s lunch, and each request was followed by another. The seltzer with ice, a bendy straw, frozen Indian food in the microwave, hot sauce, his special fork, and “Oh, can you make the salad dressing?” With each additional command was that anger, a fiery heat in my chest.

One day, I measured his blood pressure three times and called 911 when he became confused or unresponsive. He refused to go to the hospital. On this day, and many after it, my father made choices that put a burden on me and my sister.

How many times had I urged him to get out of the house? I saw a better life for him, one involving going to a restaurant, a park, the movies. He was most comfortable and secure at home, which I didn’t understand, as his only company was pain and loneliness.

Despite it all, I was there by his side, when he had twice left mine.

I used pen and paper to process my persistent worry, guilt, and anger, but deep down the ache inside was made of sadness. For losing Iran, its culture, close family ties, stability, and prosperity. For the unfairness of it all. The imposed responsibility my father’s paralysis had on me. My anger went unexpressed because it would be cruel to direct it toward a helpless man in a wheelchair. Guilt that I couldn’t do more. My father was a burden and I was sucked into his helplessness.

The morning after the vortex incident, the rug was removed from the living room. It was folded up under the bed for sixteen months.

My father’s passing that fall offered relief and sadness. In the spring, my sister and I walked through the family home hunting for relics. Beneath the dust and disarray were treasured reminders of losses we had endured. In the second bedroom, I saw the Persian rug jutting out from under the bed, faded but still magnificent. I told my sister, “I want to keep the rug.” Maryam Keramaty
Maryam Keramaty received her bachelor’s degree in communications and journalism from Simmons University and a graduate certificate in public relations from Emerson College. Currently, she is a student at GrubStreet in Boston, where she studies the craft of writing memoir and personal essay. She is working on a collection of essays. Her work has been published in The Manifest-Station. Maryam’s other creative pursuits are nature photography, mixed-media collage, and cooking.