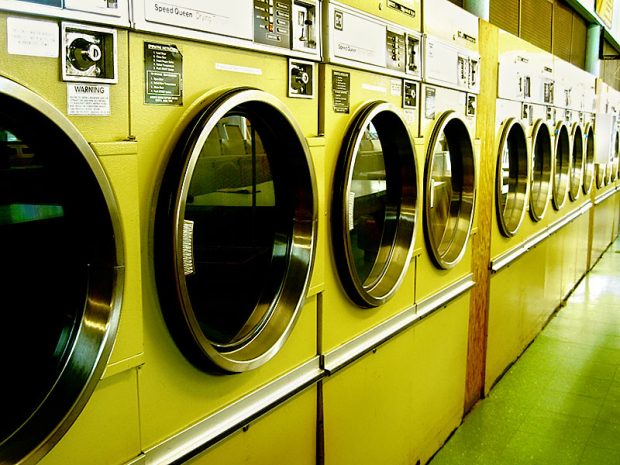 Essay & Memoir, In Sickness and In Health 5

Shame and Blessings at the Coin-Op

Just before the virus drifted into the world, a friend I’d recently met texted that she was nervous. Her washing machine had broken at the worst time, just before a trip.

I have to go to the laundromat! she wrote; I could picture the shudder as she added the scream emoji. I understood. Laundromats can be dingy, sometimes dangerous, places. Even the nicer ones offer little appeal. For many people, going to a storefront to wash your clothes is like going to the thrift store to buy kitchenware.

My friend was also unsure of etiquette. In a place of such weird intimacy, do you avert your eyes from someone’s laid out socks and pajamas? She didn’t want people knowing the color of her sheets and towels. In some ways, doing your laundry at home was social distancing before it ever became a thing.

Her candor told me she wasn’t aware that I don’t have a washer or dryer myself. It’s been ten years in fact, since just after my divorce, that I’ve had the convenience of doing a wash right in my home—of doing a light load just because I wanted to wear a certain outfit, or because my son spilled juice on his favorite blanket. But my home is so small, and the expense never seemed justified.

When people do find out, they react with surprise, then veiled pity.  Lacking these appliances seems just steps away from homelessness. The washer/dryer is a tangible symbol, like the man in the tattered coat riding a bike because he doesn’t have a car. To haul your dirty clothes, your rumpled used bedding, through the parking lot is to admit you’re a have-not.

When the stay-at-home orders hit the news and our lives, I was worried not just about food and hoarders and falling enrollment in my writing classes. As a single mom of a teenage boy, I need to wash clothes once a week—at least. So while my Facebook friends were figuring out how to get food delivered, I was researching where to wash our clothes.

It turns out that even during a quarantine, laundromats are “essential,” at least for some people. So even though it’s a risk, I can still go to Mr. Bubbles, a mile from my house, next to a tiny carniceria where Latino construction workers eat lunch while watching Spanish soccer on the mounted TV, and where I often order a burrito to-go. The other establishment is Woodrow’s Tavern, whose drifting cigarette smoke I can smell forty feet away. Of course it’s closed now.

At Mr. Bubbles, most of the patrons during the pandemic are still female, towing small kids and bundles of colorful clothes. I’m the rare white woman, though plenty of old white men frequent the place. Some are truckers, stopping off on the road; others are just alone. Sometimes there’s a couple, and their easy rhythm of folding together reveals they’ve done this for years, if not decades.

I do see people who are homeless sometimes, but more often it’s simply people who live lives of scarcity. They come in battered cars and pick-up trucks and campers that could use a wash, too. Even the laundromat has its class distinctions—you can tell by the laundry sacks and baskets, if they’re new and matching, or if the loads are dragged in, heaped and bulging, in dusty and torn garbage bags.

There’s a different tension now when I go. People are wary, keeping the distance we’ve been instructed to observe. I watch the women with their children and remember my own single mother standing in front of a pile of tangled clothes while I ran around with the other kids; we’d beg for snacks from the vending machine, for the arcade game that usually was broken, swallowing precious money. These mothers and I exchange amused glances, a sigh and a shrug as a child dashes past, buzzed out and bored.

I can’t help but wonder how many of these people have lost their jobs. We’re a hospitality state here in Nevada, after all. And how many won’t get stimulus checks for whatever reason—a choked system, fear of the government? Where does that old couple go after their clothes are done? It may be that they live in that camper in the parking lot, the one with the little yapping dog.

The last time I did my laundry, people were more quiet than usual, and so the sound of hardship seemed louder: plinka clinka clink. Sixteen times for a $4 wash. Eight minutes of drying time for a quarter (never enough). With some people, you can almost see the pain it costs, coin by vanishing coin.

“We’re all in this together, you know,” I told my son the other day. “Rich and poor.” He will remember it all—how when he was little he liked to exchange the five-dollar bill for the quarters, to push those coins into the machines. In middle school he helped me haul in our baskets. These are the kinds of lessons that are breathed in, that can’t be learned through movies and books, or by a drive through the poor side of the tracks, to see how others live. We often leave his outgrown clothes in a pile, with a note “free” taped on top, and sometimes, before our last load is dry, the offering is gone.

Maybe people suppose I feel deprivation because I have to leave the house to wash our clothes—and that the poverty it suggests taints me. And it’s true, during this time of uncertainty, I do sometimes wish I could stay safely inside and listen to the comforting hum of the dryer in the other room. Ultimately, though, I feel the opposite: going to the laundromat makes me see how much we do have. And that helps, now that the edge feels closer.

Now and then, as I drive home to my warm, humble home, gratitude fills me with such swift force I can’t breathe. How lucky, I tell myself and my son: how lucky we are to be alive. 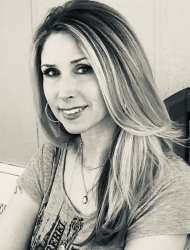 Joelle Fraser
Joelle Fraser has two published memoirs (The Territory of Men, 2002, Random House; and The Forest House, 2013, Counterpoint Press). Her essays have appeared in journals including Brevity, Crazyhorse, The Iowa Review, Michigan Quarterly Review, Fourth Genre, and more. She also teaches online at Creative Nonfiction. She lives in Reno, Nevada with her son and five rescue pets, where she's also working on her third book.

Joelle Fraser has two published memoirs (The Territory of Men, 2002, Random House; and The Forest House, 2013, Counterpoint Press). Her essays have appeared in journals including Brevity, Crazyhorse, The Iowa Review, Michigan Quarterly Review, Fourth Genre, and more. She also teaches online at Creative Nonfiction. She lives in Reno, Nevada with her son and five rescue pets, where she's also working on her third book.