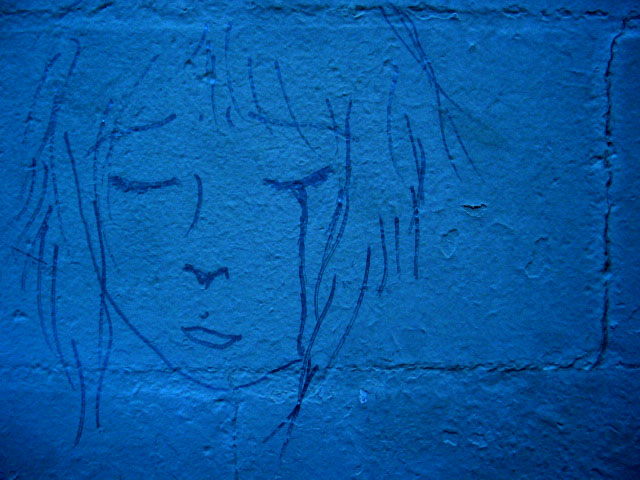 Sensory Processing Sensitivity is not a condition, a disorder, or a diagnosis. It is a neutral trait that evolved in 20% of the human population . . . because it is a survival advantage in some situations and not in others.     — E. Aron et al. The Highly Sensitive Person

It started, I gather, when Dad left Mum for the woman next door who I remember only as someone who once let me, a toddler at the time, steer her car while sitting on her lap. This is the only kindness with which she could possibly be credited, having committed the overarching injustice of destroying our family and hardwiring me for grief.

“Look at those sad eyes,” Mum would say years later, pointing at black and white photos of me taken around the time of their divorce. I looked very sweet, somberly focused on my crayons, albeit with a wise and melancholy expression on my three-year-old face. “You cried for months,” she informed me gravely. “Inconsolably. It left you with a lifelong fear of abandonment.”

Did it? There’s no telling. Unquestionably, I’m a crier; I cry as easily as I breathe. A downy feather matted against the kitchen window, a World War II vet lapping his garden with a walker to raise money to fight COVID-19, Pearl Jam’s “Last Kiss”—any of them, on any given day, will leave me watery-eyed or flat-out sobbing. But Mum was one to talk. We were the weepiest people I’d ever met, sharing a crying gene on the same strand of DNA, surely, that also codes for comic timing and the propensity to burst into song on a sun-dappled forest trail. I’d seen her swipe at her eyes as sprinters rounded the final curve in the Olympic 400m finals and watched tears idling down her cheeks while Handel’s Messiah blared from the CD player in the living room. I may be a crybaby, but I figure: I come by it honestly.

“I think it’s congenital,” I said to a friend. I’d spent some fruitful hours online, researching this possibility. The brain’s limbic system is responsible for signaling the lacrimal system to produce tears in response to physical or emotional stimuli: naturally, an over-developed paleomammalian cortex could lead to excess waterworks. “Either that or a hyperactive lacrimal gland,” I reasoned.

He slid a box of tissues across the table towards me. “Have you considered therapy?”

I chose my therapist because I liked her name, one of those polysyllabic, double-barrel first names rarely seen nowadays except in classic children’s books and the Deep South: Susannah-Joy. The names didn’t chime naturally together. Was this her name at birth? Or did she tack “Joy” on the end as a reminder, the way you’re supposed to choose a computer password that then becomes your mantra because you use it every day? I explained when I booked the appointment that I was approaching this—my crying—with a quasi-scientific interest. But Susannah-Joy ushered me into her bright and homey office as if I were a china teacup trembling in my saucer, filled to the brim.

Soft-spoken with short, salt-and-pepper hair, Susannah-Joy had almond-eyes that looked like they smiled easily, which made me want to tell her something funny. Something like the time in my final year of university when my boyfriend living overseas came to spend a month with me and, within days, I was so grief-stricken at the prospect of his eventual departure that he changed his ticket to leave earlier. Or that I sometimes don’t read the final chapter of books I love, so as to never to find out that Frodo doesn’t live out his days in the Shire. Or, that I can be counted upon to cry on airplanes, when the delicate juxtaposition of human ingenuity and human frailty becomes simply too much to bear.

Then: “Can you think of a time when you’ve cried at work?”

This gave me pause. “I don’t think so,” I said finally.

“Tell me about times you’ve felt your crying has been a problem.”

Years ago, Mum and I went to the funeral of a family friend whose son, Ted, had been my high-school sweetheart. Ted’s father had been given one year to live and stubbornly took four. Mum at that point had outrun some bad odds with breast cancer 15 years earlier, only to be sideswiped with a new, unrelated cancer diagnosis the previous fall. I started blubbering before Ted had even made his way to the pulpit to give the eulogy, my sobs cramping in my chest. I didn’t want to draw attention to myself so I was leaning forward in the hopes that the tears would breach the brim of my lower eyelids and plunge to my lap rather than streak my mascara. Snot meanwhile was seeping from my nostrils, creeping along the ridge of my upper lip, and moustaching the sides of my mouth. Think of something funny! I implored myself. Think of the best joke you’ve ever heard! It was no good. Sunlight streaming through the stained glass windows was edging across the pews, past the knees of the congregation—excuse me, excuse me—as if it had a message to deliver to someone in particular. But by then Ted had left his seat and was squaring his shoulders at the front of the crowded church, his mouth working, struggling to fetch the words from their hiding place. I shot a glimpse at Mum, expecting to catch her in the same sticky state, only to find her bright-eyed, but with a dry, sad smile on her lips. She took in my blotched cheeks, my pocked and trembling chin, and started clawing through her purse for a handkerchief.

“Get a hold of yourself!” she squawked, sotto voce, which just set me off even more. Somehow Mum had found a way to stopper her tear ducts and I hadn’t. Not when all I could think of was that one day it would be me up there like Ted, standing in a muted room filled with friends and loved ones, speaking about my mother and trying to keep my crying battened down.

But I didn’t tell Susannah-Joy about that. Instead I told her about my Dad ditching our family for the next-door neighbor and my mum’s entrenched theory that this had left me terrified of loss, of being left behind. Susannah-Joy nodded sagely, unconvinced.

“And why do you feel your crying is problematic—does it affect you physically, or are you concerned that it is viewed as a sign of weakness or inadequacy?”

I thought of the headaches and dehydration. Eyes so swollen they can’t be convinced to open in the morning; my face so chapped and raw, the skin peels away.

I shrugged. “It’s just sort of embarrassing. It takes over, even when I don’t think I’m actually that sad.”

Weeks later, I looked up some of the articles Susannah-Joy had recommended, one link leading me to another, excitement blooming in my chest. I felt like one of those people who can’t stop eating toilet paper or who want to marry their standard poodles, who by professional referral or happy accident find themselves scrolling through websites and discussion forums, dumfounded that there are other people in the world just like them. Highly Sensitive People or HSPs, I learned, are more easily moved to tears by sadness, gratitude, and laughter. They react more strongly to the emotions of others. They fear situations where their senses may get overwhelmed.

This was exactly the kind of thing that would warrant a call to Mum, pouring myself a glass of wine then settling into the striped armchair in the living room before tapping her name at the top of my iPhone favorites. They’ve found the crying gene, Mum: we’re HSPs! So is Alanis Morissette!

Susannah-Joy said: “I think the fact that you don’t cry at work suggests that you do have the ability to suppress the urge when you feel it is paramount that you not show this side of yourself.”

As in, I could choose? The way my therapist—I asked her—had chosen ‘Joy’ by adding it to her name? That seemed impossible. As far as I could tell, grief tended to sweep in like a winter storm, ice-cold and cutting. But happiness was just as capricious, gathering me up in its soft wings and sending me soaring.

“If you like,” Susannah-Joy said, “we could work on this together, work on the tools you could use to stop yourself from crying in other settings where you don’t want this side of yourself to show.” Her voice was soothing. “But ask yourself. If by learning how to employ these tools you end up feeling emotions less deeply, would you want that?”

This was the easiest question she’d posed so far. We talked about this, Mum and I. Without a doubt, we would rather cry and suffer the consequences than risk the possibility of never feeling everything else that came with it: the beauty that draws every breath from the lungs, laughter so big it becomes something physical.

Susannah-Joy nodded, as if I’d made the right decision.

“I believe you’re an empath,” she told me solemnly. “You feel things deeply, both things that affect the people around you and things that affect you, yourself. Other highly sensitive people may express themselves differently, with anger for example. In your case, you cry.”

What’s more, Susannah-Joy didn’t think my crying was particularly off the charts. She explained this gently, providing me with a complex formula that involved dividing or multiplying the number of years a person grieving had known the deceased by the number of years gone by. I didn’t make note of the equation—I was too beset, tugging one tissue, then another, out of a box on the table.

Susannah-Joy asked me my age. Her last question, by far, was the hardest. “And how long has it been since your mother died?”

“About four years,” I managed that day.

Then we sat listening to the slop and gulp of me trying to stop my tears, even as my mind was straining for a punch line. Have you heard the one about the crybaby who goes into a bar? Only I didn’t say that and we continued to sit there, letting the silence lap and the watery winter sunshine inch its way closer, excuse me, excuse me—nothing to do but to sit there leaking, waiting for the light to come. Shelley Wood
Shelley Wood’s short stories and essays have appeared in a range of international journals; her debut novel, The Quintland Sisters (William Morrow) was published in 2019. She lives in Kelowna, Canada, where she works as a medical journalist by day, managing to complete a draft of her new novel in the empty, after-work hours afforded by the COVID-19 lockdowns.