They pile up, inexorably: There’s that woman, riding the Teacup alone at the county fair, when your parents finally trusted you. All your friends’ parents let them go unescorted. You promised not to eat too many corn dogs or funnel cakes. You swore not to enter one of the scarier freak shows. You, like all the boys, wanted to ride the Bullet, the rickety wooden roller coaster, spit on people from high up on the Ferris Wheel. They believed they could figure out Ring Toss and win prizes. You, you became mesmerized by a woman — older than your mother, younger than Grandma. She looked like a number of teachers you’d lied to, ones you’d lie to in the future. She rode that Teacup by herself, and didn’t turn the wheel so as to spin. What a blank, blank face. Your friends ran off to ride the Whip. You followed the woman — she wore black, you remember — to the Tilt-a-Whirl where, again, she slid into the seat, made no eye contact with the attendant, and let herself be strapped in, solo.

And then there’s that time your father insisted on a frosty mug of root beer on a school night, out at the Caravan on the other side of town. You sat in the back seat with the dog. Y’all ordered over the speaker, and the carhop showed up, set the tray into the driver’s side window, and your father passed out drinks. He wouldn’t turn on the radio, for he thought it might drain the battery. You set your root beer between your legs, not thinking how the dog might nudge over and lap at the foam. Your mother said something about how no one should eat fried foods anymore, and you looked off to the side, at a woman — not the same woman from the county fair, but similar — seated alone, a tray against her own door. She’d ordered a hamburger, fries, a large milkshake. The carhop had kept an inch of paper wrapper on the straw. The woman appeared no longer hungry, and stared off, you figured, at three life-sized plaster camels the Caravan owner’d bought, set up on the edge of the parking lot, as if they labored through a long journey.

Your friend died at the hands of his own father. Everyone understood it to be an accident. Your hometown paper offered an explanation, below the crease, which included direct quotes from those involved. The father — who happened to be the veterinarian for your dog — owned land. He kept cows, goats, two Jesus donkeys, a horse, all pets. He brought in the first llamas to the area, and people stopped on the side of his land to dole out carrots and take photos with those disposable cameras. “Someone kept putting out corn in the middle of my pasture,” the veterinarian said. “Poachers wanted to shoot deer that showed up about every night.” Your friend thought he’d be a good son. He awoke early on a Saturday morning and crept out there to steal the poachers’ bait. He didn’t know that his father’d awakened earlier, that he stood off in the trees, hidden, armed with a rifle he wished only to shoot above the deer hunters’ heads to scare them off. He aimed low, accidentally. Your friend collapsed, right there above the cobs. A year later his father took his own life. The dead friend’s mother moved two states away. Your dog missed his rabies and Parvo vaccinations for a couple years. You wondered if the vet gave himself a shot, like he must have done to aging or compromised dogs — like two or three of your dogs, in the past. Or did he shoot himself? You thought about him often, and worried about how you, too, might one day succumb to grief.

Your mother’s cousin’s parents didn’t believe their son would get polio, back in the Fifties. He might’ve been the last person to become afflicted, and you saw him at family reunions only. He wasn’t shy to wear a swim suit, that one withered leg dangling out like half a wishbone, like one tendril of overcooked linguini, like one-fifth of a lifeless starfish. The smoke from one of your mother’s uncles’ cigars would’ve supported him better, down there at a picnic table lakeside, while other relatives waterskied. You could not stop staring. You wondered, How can a person be so brave, like that, in public? Some years later, when they found your second cousin dead, at the back door entrance to his boarding house, you wondered if he plain gave up, trying to ascend a set of stairs.

How excited you were to go on a fourth date to the drive-in movie. It looked as if someone would soon be giving up a letter sweater, someone would be sporting one anew. Was the man in the next car, his speaker affixed to his quarter-rolled-up driver’s window, spying on his son or daughter? Was there a woman with him, her head forever down by his lap? You nod to your date and say, What’s his gig? The man never gets out for popcorn at the concessions stand — no corndogs or funnel cakes, either. Occasionally he glug-glug-glugs from a fifth of Jim Beam. The movie’s Jaws. The man wipes his eyes with a handkerchief. Did he have a child drown? That’s it, you later learn. He’s alone. His child died. The marriage failed.

Somewhere down your childhood street, a woman told her husband that he better clip the kudzu vines — thick as a child’s forearm — that entwine the pines out back. Who knew that one of those trees might stand erect only with the assistance of the vine? He takes a hatchet and limb cutters, then pries the vine away. The tree falls on him, crushes his skull. After a while, he’s taken off life support. Your mother makes you take a casserole down to the woman, a day before the funeral. They have no children, which seems good. After a couple months, riding your bike around the neighborhood, you veer from the woman’s house, spooked by how she sits on the front porch, waving her arm in a way that looks like someone chopping.

There was that German shepherd mix — Sport or Rex or maybe Cleo. They featured it on the local news, August and May. It used to go down to the corner, wait for the bus, then accompany that little boy, the leukemia boy the church held fundraisers for monthly. Bake sales, yard sales, raffles. Later on in life you’ll say the kid was in your same grade, that you sat beside him in homeroom, though he was really a grade behind or above you, and then he was homeschooled before the notion became commonplace. You were eleven or twelve, he or she ten or thirteen, traveling to Emory, Duke, that Danny Thomas place in Memphis, St. Jude’s. The last time you saw this child, seated in the living room window, waving as you rode the bike past, having dodged the tree woman, a bald-headed child stared back at you, waving an arm that couldn’t have held more strength than your second cousin’s withered leg.

In a way, at times, you wish you’d’ve kept a diary, or a journal, marked a calendar. When pressed, you can’t remember which came first, the county fair woman or the leukemia boy who might’ve been a girl. It blurs together. And it continued — stricken faces of doomed people unable to handle grief, always alone, silent. You watched them after their houses burned, after they swerved from deer, crashed their cars, lost their loved ones upon impact. In college, you performed community service at the YMCA, or YWCA, or any type of community center that offered pottery classes for senior citizens. How many people ended up throwing memory jugs on the wheel? How many people appeared to fashion an urn to hold cremains?

Something about God being dead.

At the Job Fair, you found no interest in any opportunity that involved a management position. Your grades weren’t enough for graduate school, more than likely, plus you didn’t want to end up being a person who spent forty years blathering on about what other people said or wrote or did. You shuffled along. You scanned pamphlets, and set them back down. Then, there at the end of the line, on the back row set up in the college’s auditorium, you came across charitable organizations, one after another. Every pamphlet offered a photograph of people you’d known while growing up. Here I am, you said.

Even with your commitment to the poor, the disabled, the hungry and anguished, the emotionally distraught — every day, every day — you still see that blank, blank face on that Teacup woman at the fair. What was she thinking? What happened to her? How could you make her life better, should she appear at your office, here, today? 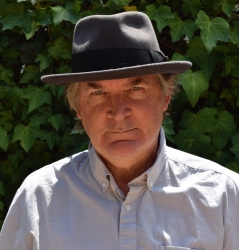 George Singleton
George Singleton has published nine collections of stories, two novels, and a book of advice. His latest collection is You Want More: Selected Stories. His fiction has appeared in The Atlantic, Georgia Review, Harper’s, One Story, Story, Agni, Epoch, Playboy, Zoetrope, and elsewhere. His new collection, which includes “How You End Up Choosing Such a Path,” will be published in The Curious Lives of Non-Profit Martyrs in August 2023, from Dzanc. A former Guggenheim Fellow, and member of the Fellowship of Southern Writers, Singleton lives in Spartanburg SC.