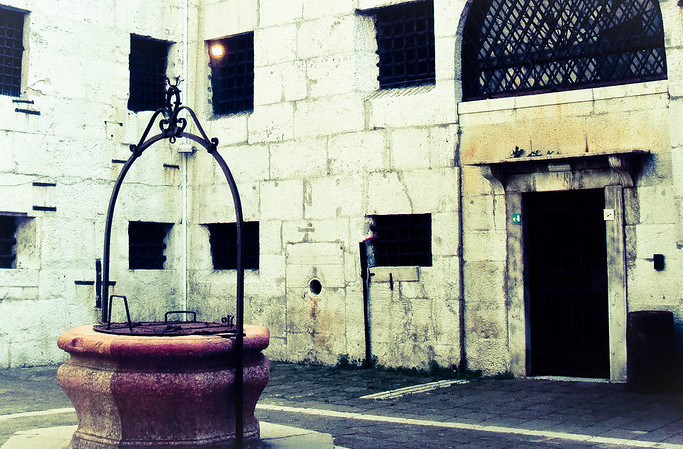 And there came to that town a man who was set upon by boredom, and fatigue, and ill-humor, such that his heart ached and his mind pushed toward expiration. And as he lay gasping among his companions, the priest passed him by, and the milkmaid passed him by, but a peasant, one whom I have elsewhere called a Samaritan, did stop, and take pity on him, and try to relieve his affliction.

And then did soldiers clap both men in irons and bring them before judges, who did sentence them both to hang.

The two convicts walked toward the gallows. The sun was a demon. Sweat stung their eyes. Their torsos and feet were bare. Their wrists were unbound, for there was not enough rope for wrists. Rope was for necks.

The taller man, the soldier, looked at the smaller man: a peasant, surely. He had the donkeyish look of a peasant. Squat frame, fuzz everywhere, big eyes pointed earthward as if searching for a sweet tuft of clover in the dusty street. All the soldier knew was the man’s name: Pietro Zottoli. He couldn’t communicate with the man, couldn’t push through his thick Barese dialect to the soft, familiar Neapolitan lurking within.

The soldier was from Naples. A plague outbreak had brought him across the dry plains to this place, to this Noja. Before that he had been with Murat’s men in Bologna and Occhibello, but then the Austrians had captured him and handed him over to the Bourbons, who were, it seemed, back in charge. Plague duty was a kind of punishment for being one of Murat’s men. There was no fighting on plague duty, but there was plague. That was the punishment.

The gallows were inside the town, where the plague also was. Two brown and white barricades separated the plague town from the rest of the world: two rings of wood and stone, taller than a man. Within the smaller ring, a moat. The town was a bullseye and the moat and barricades were the rings. The plague must, at all costs, be confined to the bullseye.

There were soldiers all along the top of the inner barricade, watching the prisoners walk to the gallows. He could see them in the gaps between the tall buildings. It was something for them to do. There was so little, so very little, to do along those barricades.

No soldier was allowed into the town, but the tall soldier was in the town, within the barricades, within the moat. The jailers, the judges, the executioners — they were all townsmen, not soldiers. They, too, were inside the bullseye. The town was under quarantine, a makeshift lazaretto. Some supplies went into the town, but nothing came out: nothing was to pass beyond the moat. If a bird flew over the moat, the soldiers shot at it. Dogs sometimes crossed at a dry patch in the northeastern section; they shot those, too. They had even shot a man, once, a man delirious with plague who had run onto the drawbridge when it was lowered to allow a milk cart in. The soldiers would have shot the poisonous wind blowing out of the town if they had enough bullets.

Snot ran down the soldier’s lip and into his mouth. He sniffed. The smell here inside the town wasn’t the smell of death. It wasn’t the smell of bodies. This surprised him. There were bodies, of course, heaped in carts around the church. He could see them if he turned his head. He’d be joining them soon. But the smell wasn’t of bodies. It was of sulfur, black pepper, cumin, saltpeter. It was a shrill, scraping sort of smell, a dry cough smell. These were the things the townspeople were burning to kill the plague: anything that exited a plague house had to be smoked thus. Often, too, they would dip objects in vinegar, so there was a tart smell, like someone’s finger in your cheek, mixed in with the spicy smell sometimes. Underneath all that there was probably a swampy smell of bodies, but it was impossible to get underneath all that.

On the barricades you sometimes caught this smell and thanked God that you weren’t inside the town. But then sometimes you caught a breeze from the sea and remembered home. He couldn’t smell the sea now.

He looked again at the peasant. The man hadn’t looked him in the eye during the entire court-martial. Hadn’t looked him in the eye once during the three days they’d been chained under the courthouse. The tall soldier had tried to speak to him, tried to thank him, tried to assure him that his path, at any rate, led heavenward. But the man had just stared at his feet, honking out answers to the questions of the jailers or the judges in his impenetrable Barese. All the educated men spoke Barese here, of course, but when the peasant spoke it sounded like a donkey trying to talk like a man.

The only words this donkey had ever spoken to him came in the first shock of their arrest. The captain had seized the soldier on the barricade, and below, across the moat, a policeman had seized the peasant. As the two men struggled against their captors, they had looked at one another with great alarm, but also they both were laughing. The laugh said: Surely this couldn’t be happening? Surely it wouldn’t happen because of this?

“Hey!” yelled the soldier to the peasant as they entered the broad square that held the gallows. The guard behind him struck him on the head. “Hey!” the soldier yelled again. “Brother! Companion!” The only answer he received was a kick to the back of a knee from the guard. The soldier fell in the dust, and the guard kicked him in the side. The soldier struggled to his feet. His knees were bloody and his head was sore.

The peasant kept plodding forward. A deaf, dumb beast of the fields.

The guard struck him in the side of his face with his rifle butt. Blood formed a rivulet with the sweat that was stinging his eyes. Dust was getting in there, too. He wiped it with a free hand.

Another strike in the face. Another kick to the back of the knee. The soldier collapsed, but he caught himself with his hands before his face hit the road. He stood up again. Both hands were bleeding.

He tried again, concentrating on getting the sounds just right. “Ammandìneme che t’ammandènghe!”

The peasant’s step slowed. He turned his head just a fraction and looked at the soldier’s bleeding face, his inflamed eyes, the dust and sweat matting his hair like an old goat. Then he turned his face ahead, for they were at the gallows.

The entire town was there, those who were not imprisoned in their houses. Hundreds of people. Old men in cloth caps. Mothers with emaciated babies. Silent, staring children. Heads and shoulders lining the flat roofs of the buildings like crenellations. Along the barricades, in the blue distance between the buildings, the soldiers looked on. This would be the most excitement they had experienced in weeks. Months. Life on those barricades was so goddamn dull.

The two men mounted the wooden steps: first the peasant, then the soldier. The ropes twitched in the breeze as if rehearsing their parts. The soldier said another prayer. It was the same prayer as before, but it felt like a different prayer. A stronger prayer.

As the two men stood on the wooden blocks, waiting for the ropes to be fitted around their necks, he asked one more time. “What does it mean? Ammandìneme che t’ammandènghe?”

A deck of cards, was all it was. The peasant had been walking along the inside of the moat, where the air was fresher, and had seen the bored soldiers sitting in the heat atop the barricades. He had asked them, laughing, if they wanted anything to pass the time. “Some brandy!” one had replied. “A custard pie!” yelled another. “A deck of cards would be just lovely,” said the tall soldier. The soldiers had all laughed, but as they did the peasant reached into his pouch and brought out a small, brown rectangle. He tossed it over the moat, from the bullseye to the next ring over, and it landed at the tall soldier’s feet. When the tall soldier stooped to pick up the cards, his captain clapped him on the shoulder. At the same moment, across the moat, a policeman did the same to the peasant.

The deck of cards from the plague town fell into the moat. If it hadn’t, they’d have burned it.

Could cards carry plague? It didn’t matter. Nothing was to pass beyond the moat.

The ropes were around their necks now. The crowd was silent, all but the babies. Not a sound came from the soldiers on the barricades. The tall soldier closed his eyes. The stinging in them was too much. He watched colored patches swirl against the red backdrop of his eyelids, thinking of Madonna holding her dead son in his lap — an etching his mother had kept on the bedroom wall.

At last the peasant spoke. It was slow and labored, for he was trying to speak proper Neapolitan. “It means, hold me, that I may hold you.”

The tall soldier opened his eyes. All he saw were burning whites and yellows. He felt the peasant’s rough hand brush his own. He grabbed it like he was falling over a cliff.

“But really it means,” said Pietro Zottoli, chuckling, “We two are fucked.”

Then, without a word, the guards kicked the blocks out from under the prisoners’ feet. They moved with the swift, synchronized movements of dancers. The two hands parted.

Click here to read Mark Doyle on the origin of the story.

Mark Doyle:
This story was inspired by an incident related by Alex Chase-Levenson in his excellent book about plague quarantine in the Mediterranean, The Yellow Flag. It happened during an outbreak of plague in Noja (now Noicattaro), Italy, in 1815, when much of Europe was at war and authorities adopted unusually severe methods to quarantine the town, partly because they had so many soldiers handy to come guard the place. A story later emerged, which Chase-Levenson thinks is probably apocryphal, about two men who were executed for the same reason as the peasant and the soldier in my story: a good deed unmercifully punished.

I’m often coming upon little stories like this in my reading and research, offbeat or outlandish episodes, people, or situations that pique my curiosity. I’ve recently begun writing fiction as a way to probe the human dimension of these stories. As a historian, I’m not supposed to go much beyond the evidence before me, which is often quite sparse. But as a fiction writer I can fill in the blank spaces and, sometimes, discover what it was that intrigued me about a story in the first place. This is one of those. 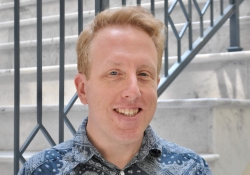 Mark Doyle
Mark Doyle is a professor of history at Middle Tennessee State University, where he teaches classes in British, Irish, and world history. He is the author of two books on religious conflict in nineteenth century Ireland and the British Empire and the winner of the Stansky Book Prize from the North American Conference on British Studies. Sometimes he writes about happier things: his most recent book, published in March 2020, is a social history of the British rock band the Kinks.