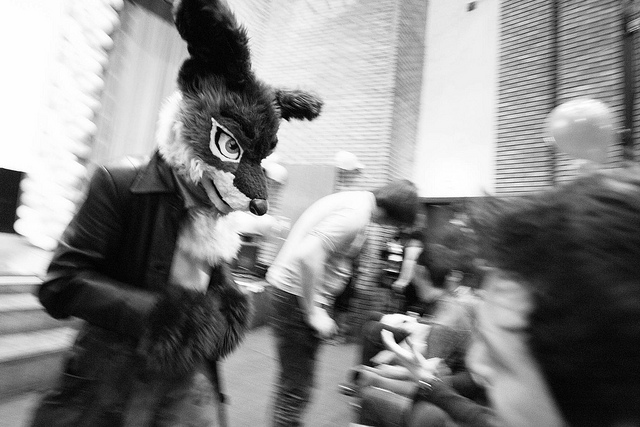 The lake was alive with lights: the lanterns on the boats golden and round like hundreds of miniature suns, and the moon so heavy on the horizon it seemed impossible it would climb any higher in the sky. The foxes smiled debonairly as they steered the boats. They knew well how to mimic the behavior of aristocratic young men, though they couldn’t entirely refrain from an occasional impatient yip, while their doll companions tried to wear the same demure expressions they had so often seen on their mistresses’ faces.

How strange to find themselves on boats, the dolls thought. How strange to be separated from their devoted owners. One of them had been sleeping beneath a flowered coverlet when a fox leapt through the window and tore her from her protesting owner’s arms. Another had been lying in a lacy crib before finding herself in a fox’s mouth. It was all quite shocking, though the dolls weren’t terribly upset. What young lady doesn’t want to be abducted by a gay troubadour? The thought of their forsaken little girls was sad; nonetheless, the dolls couldn’t help smiling furtively into their fans.

The Isle of Delights was in sight now, a black line in the glittering water. The foxes could barely contain their excitement, and the dolls tittered nervously. But wait, what was that along the shoreline? It almost looked as if there were broken dolls, thousands of them… One or two of the dolls screamed, but the foxes hastened to explain. You young ladies aren’t accustomed to being out on the water, always all kinds of strange debris; you’re seeing twigs and branches from the wind storm last week. The dolls tittered again, embarrassed by their ignorance, and the gallant foxes helped them ashore.

How glorious the night! It was the festival of the Mid-Autumn Moon, and the music of human celebrations drifted across the water, but even the humans weren’t enjoying a repast as splendid as the one prepared by the foxes. Embroidered quilts were spread out on grass dotted with chrysanthemums sagely nodding their yellow heads. The dolls seated themselves and modestly pulled their silk dresses around their ankles. What would the foxes do next? Tiny doll hearts fluttered like hummingbirds.

The foxes, with a flourish, spread a bolt of golden silk over the embroidered quilts. The picnic hampers were unpacked, and what wonders they contained. Melons and mooncakes. Tiny jade cups, exactly suited for a doll’s delicate hands, and wine as sweet as dew. Platters laden with red salted goose slices and pickled crabs. The dolls, accustomed to nothing more sumptuous than imaginary tea parties, were quite dazzled to be eating such splendid food, and perhaps they drank more wine than was wise, for a doll. The foxes watched them carefully, whiskers twitching. Every fox knows that the secret to immortality lies in devouring a doll’s heart essence, but opinions differ as to exactly what a doll’s heart essence might be. The foxes had concluded on this particular Mid-Autumn Moon that perhaps a doll’s heart essence was produced by feeding dolls pearls. After all, they had previously experimented with feeding dolls gold and orchids. Therefore, the platter they presented next was heaped with carp stuffed with nightingale wings and decorated with pearls arranged to represent a phoenix. The dolls exclaimed and applauded and daintily ate the carp, and the nightingale wings, and the pearls, every last one.

It was time. The foxes draped their front legs around the dolls’ shoulders. “Look at the silver toad in the moon,” they said. “Look at the Weaving Maid Star. At the Cowherd.” The dolls lifted their little heads to look at the night sky and the foxes, with great delicacy, tore out their throats. Had they succeeded this time? The foxes looked at each other, hoping to see some indications of immortality, though they were no more certain what immortality looked like than they were certain what a doll’s heart essence might be. But surely there should be some new luminosity in the air, a sparkle? They tore the dolls apart, searching. They didn’t want to admit it, even to themselves, but this was ending like every other Mid-Autumn Moon night. Finally they climbed back in their boats and set off for shore, their lanterns long since doused. Even the human revels had ended, and the night was black and silent, the moon hiding behind a bank of thick cloud. A cold drizzle made the foxes shiver, and when they reached land they ran to their dens and curled up to shut out the freezing night, their tails over their eyes.

Winter arrived, and soon the Isle of Delights was muffled under heavy snow. The only movement was from the coiled dead leaves that still stubbornly rattled amid black branches. The dolls thought longingly of home and the little girls who had loved them, though they knew all that was past and gone. Their silk dresses, red as blood, blue as spring, lay in frozen heaps under the bare trees. By the time the snow melted the dresses were the same color as the surrounding mud. With the arrival of spring a creeping fungus turned the dolls’ bright brown eyes to dull green. Arms and legs split open under the blazing summer sun.

But now it’s once again glorious autumn. The night air is full of the sound of drums. The foxes are in their fairy boats, red coats gleaming in the light of lanterns. They reach the Isle of Delights, and their passengers cry out in fear when they see dolls dismembered and scattered about, but they are easily reassured. Soon a joyous party is underway. And why not celebrate? Perhaps this is the moon that will confer immortality. Perhaps this moon will bring each tender longing heart true love. Perhaps this is the Mid-Autumn Moon we have all been waiting for.