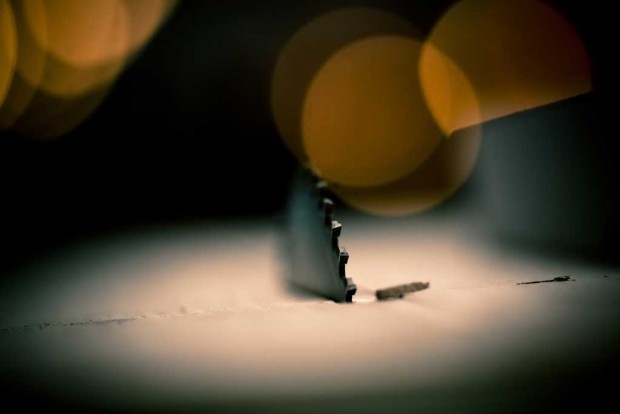 So I’m with Rosalie at Girl Scouts, like every Wednesday, and I’m passing out the manger pieces I pre-cut with my jigsaw at home.  That’s what Karen loves about having a dad on board.  I’ve got a jigsaw, and unlike Rolf, Karen’s husband, I know how to use one.  We’ve got only two more Wednesdays, counting this one, before Our Lady of Hope Elementary closes for Christmas break, so it’s pretty important that we get these mangers put together now.  While they’re drying, the girls are going to use clay to make the Holy Family, the animals, the wise men and such.  While those are drying, the girls will paint the mangers and glue straw in place.  I didn’t know how far we’d get today, but you can see that time was of the essence.  Every minute of the troop meeting definitely counted.  Plus, Rosalie’s looked forward to this for a week.  At home I let her put on the safety goggles and cut some of the manger walls, but I was glad when she got bored of that and wanted to watch America’s Top Model.  Some of those walls she cut were a little off.  I’m a carpenter, and I’m kind of crazy about things lining up.  When you’re building, you can’t just say, okay, close enough.

I was going around the room, showing the girls what a plumb line is, adjusting their corners into 90-degree angles, helping them see they could make something that would stand up.  Structural integrity, I tell them.  I build roofs over people’s heads; they can’t leak, and they can’t go flying off in the next 50-year storm.  This may be just a manger, but that’s no reason for it to be half-assed.  Half-assed is how I barely got through high school, how I fell into early marriage.  I wasn’t going to get into advanced stuff with the troop, but the point is, you don’t frame a house with the wrong nail.  Too long goes through; too short or too skinny doesn’t hold; too fat splits the wood.  A good 16-penny sinker, and you go straight, true, into the heart of the beam.

With the mangers, all you needed was a light coating of wood glue, accurate positioning, and patience.  The girls were concentrating, and I was proud of them.  My daughter was doing a good job; she’d gotten the three walls of the manger glued together and standing up, and was just about to lay on one side of the roof.

There was no reason Joyce had to show up just then to take Rosalie.  Sure, it was her night to have the kids, due to our absolutely insane custody arrangement that yanked them back and forth in the middle of the week.  I had primary custody because of Joyce living with her new boyfriend, but she had the kids Wednesday through Friday alternating with the weeks she had them Saturday-Sunday.  I was not about to let her get them every weekend because weekends are important family time, and Joyce with her jerk-wad live-in boyfriend was not exactly the best atmosphere in the family department.  But the arrangement sucked.  I can’t tell you how many times the kids would come home with zeros for homework on Joyce’s Thursdays and Fridays.  I keep a record of all the zeros under Joyce’s watch and show them to my lawyer, Martin.

If Joyce sent me an email in the morning asking for Rosalie early, I certainly didn’t get it in time.  I’m not one of those people hanging out on email all day long.  I’d gone from finishing the manger pieces at home, to working on Martin’s bathroom remodel to pay down my tab with him, to being at the troop meeting.  It’s not my job to wonder if Joyce is going to try and screw over the normal arrangements so I should just keep checking email.

Rosalie is trying to get her walls to stop slipping when Joyce storms the library in her stiletto boots and fake fur vest and loud voice. She’s always accused me of overpowering her because I’m 6’2” and she’s 5’1”, but let me tell you she’s the one who fills up a room.  Fills it up and sucks all the air out of it.  Joyce and I are not even supposed to be within fifty feet of each other since the incident with the backpack, but here she is in the forbidden zone, and I can see it now, how she’s going to file the complaint against me for being too near her.

Karen tries her best to get Joyce to go back to live parking and wait, but Joyce is ranting about how she needs to get Rosalie so she can get the kids over to her father’s in time for some tickets they all have for a movie.  Some stupid Christmas movie, in a theater, on a school night.  I could see the homework zeros coming.

Excuse me Karen, but you shouldn’t have to deal with this, I say, very polite.  And here I am three feet away from Joyce, who loves to lie in court and tell the judge that I push her around—which I have never done once—so I’m supposed to keep fifty feet away from her.  But here she is in my troop meeting.

Listen, Joyce, I say, calm as can be.  Rosalie’s not finished here, but when she is we’ll send her out.  Rest assured, we won’t detain her.  You’ll get her on the dot at 4:30, just like you’re supposed to.

I pause for a cleansing breath, like we do before Men’s Circle, and I try to reframe:  everything’s good.  I’ve got twelve credits left on my Associate’s; Patrick made the Honor Roll, and Rosalie likes her new school counselor.  This is about the kids, what I’m trying to create—structure and consistency, nothing I ever had, growing up.

Rosalie’s not looking at either of us, just pinching her manger walls.  She hasn’t even had a chance to begin rolling out her Holy Family, though some of the other girls are already on their sheep.  Joyce is going on in her loud voice about how she emailed and how this is a family activity and they already bought tickets and I tell her I don’t give a shit about her tickets, which are probably going to make Rosalie get behind on her homework anyway.

That’s when Joyce goes around me and tells Rosalie, get your stuff, we’re leaving, and Rosalie looks from her mother to me in this way that breaks my heart but I’m fighting for her here, so I tell Joyce, she’s not leaving, not until the troop meeting is finished, and Joyce picks up the backpack herself and grabs Rosalie by the elbow and of course that means that her hand jerks and the manger walls come apart.

This I cannot stand.  My little girl has been holding onto those walls for a good ten minutes and in five more she was going to have a lasting bond.  But now her time is wasted, and she will fall even further behind the other girls, and this is classic Joyce, wrecking her children’s lives because she has a whim, because she wants to make up for her lack of attention to the small things with big, splashy, candy-coated good times.

So I take her by the elbow, and I say, you are leaving now, and she swings her pocket book at me.  I step back and say to Karen, Did you see that? and her hand is to her mouth but she nods without speaking that yes she did see that.  I grab Joyce by the elbow once more and have to hold tight so she doesn’t pull that again, and I take the precaution of removing the purse from her other hand because that’s the weapon, but when her one hand is free and mine are full she starts battering her little fist against my chest and that’s when I hear Rosalie beginning to wail in the background.  You fucking bitch, I say to Joyce, and of course I know that’s wrong around the troop, and even more wrong in Our Lady of Hope, besides which this is not who I want to be, but there is only so much I can take from this woman.  I’m trying to back away from her hammering fist before I snap, and that’s when I bump into the craft table, hard, because I was moving sudden and I’m a big guy, and I hear the clattering of more mangers.  God knows how many of them went down.

Will you look at what you did?—I admit—I yelled at her.  Then she’s screaming back how I’m a bully and I’m always pushing her around—yes, she’s saying I’m pushing her around, which so help me God I have never done in my life—and then I see the cops in the doorway.  Karen must have called them on her cell, or maybe a secretary looking in, but then Joyce is crying up a storm and rubbing her arm and pointing to me and before I know it, I’m cuffed.  That’s when I come apart like a mortar into shards, slivers, a hundred jagged pieces.  I take my two hands cuffed together and twist free of the policeman, and yes, I do it, I flip the craft table over.  All the little girls are crying.  Rosalie is running from the room.  And I—I am a man crucified.  I am a man losing a child.  I have become the disaster Rosalie will remember all her life, and probably in her dreams, watching herself trying and trying to put together the ruined pieces of her nativity.

Photo: “Saw” by Sean Creamer; licensed under CC BY 2.0

Suzanne Matson
Suzanne Matson is the author of three novels from W. W. Norton, most recently, The Tree-Sitter , and two volumes of poetry from Alice James Books. A 2012 recipient of a National Endowment for the Arts Fellowship in fiction, she is also a past recipient of a Massachusetts Cultural Council fiction writing fellowship. Her essays have appeared in The New York Times Magazine, Harvard Review, and other venues.

Suzanne Matson is the author of three novels from W. W. Norton, most recently, The Tree-Sitter , and two volumes of poetry from Alice James Books. A 2012 recipient of a National Endowment for the Arts Fellowship in fiction, she is also a past recipient of a Massachusetts Cultural Council fiction writing fellowship. Her essays have appeared in The New York Times Magazine, Harvard Review, and other venues.