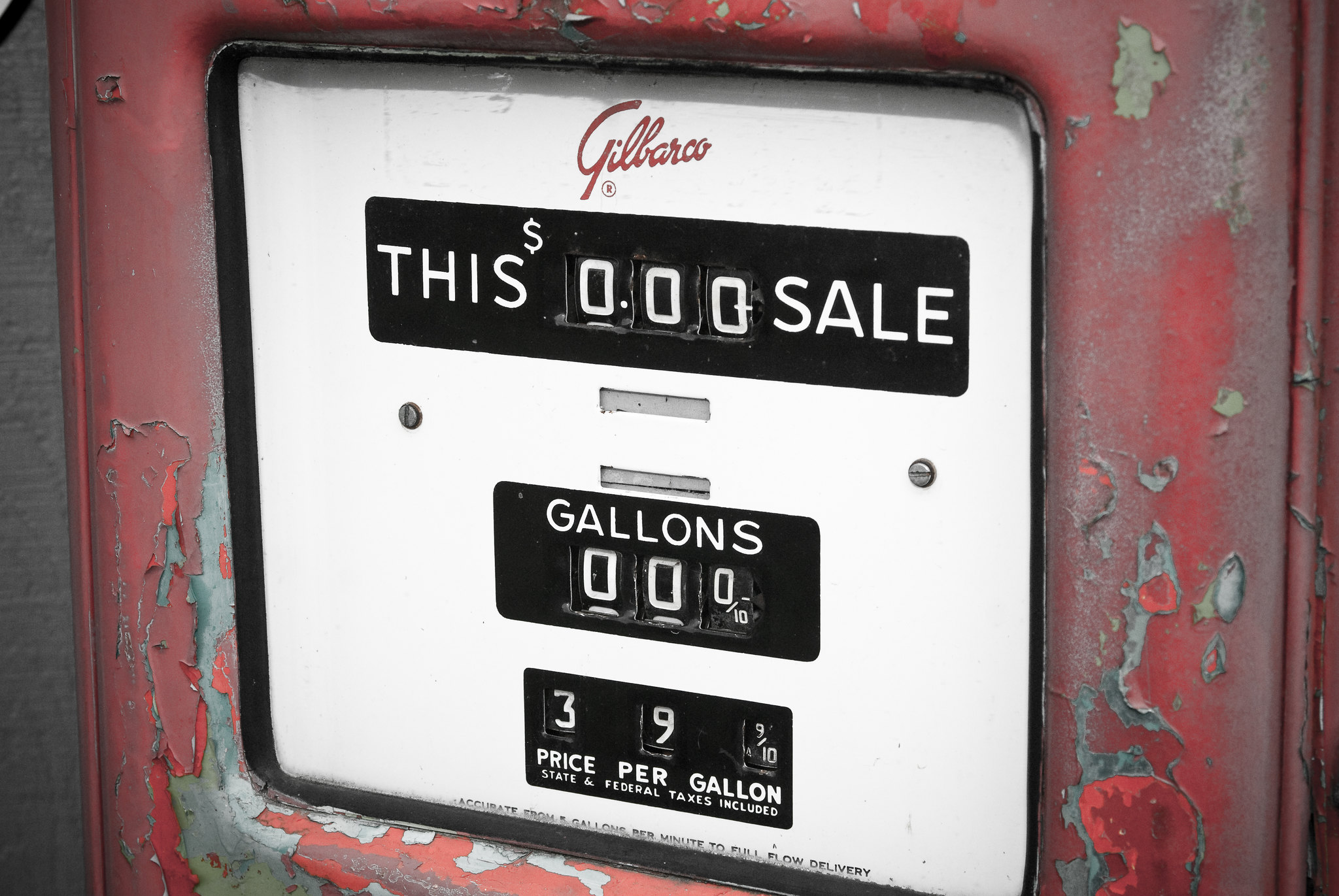 The bruised red pickup from the last three weeks meanders up alongside the pumps where I’m stacking oil cans and dodging the night’s slow-moving moths. There’s a chill in the air and soon I’m going to look for my sweater, though Calley, the girl I alternate shifts with, says the owner likes us girls to show a little flesh. Early on, I voiced amazement to her that so many townspeople came way out here for gas, nine cents more than town.

“Not people,” she said. “Didn’t you notice how many dudes come by for our high-priced gas. Guys. Old guys. Harmless husbands.”

She’s an hourglass from halter tops to ample hips. Glossy curls. She stuck out her chest and winked at me. It’s true. We get nice tips when guys like the way we lean across to swipe their windshields, open their hoods to lean in and check their oil.

And just like she said, the driver of the pickup, the guy with a red bandana around his forehead, once again sits there squinting beady eyes at me. He wants me to remember him. I don’t give him that honor, and add three more cans to my oil can tower. Finally he calls, “Hey, Doll, good seeing you again too. Now, can you pump me four dollars worth?”

It takes me thirty seconds, nozzle in and out, and I’m standing beside his window.

He arches up his skinny torso, legs straight, to scrabble around in his front pocket. Grinning, he goes to hand over a hundred-dollar bill, but it drops to the oily pavement, just like it was planned. I bend to pick it up, knowing what I let him see of me. Hoping it’s enough.

“You don’t have something smaller,” I ask, thinking the too-easy thought that sure he does, in more ways than one. “How about a credit card.”

His large head swivels my way. Still grinning. “Nope. Nothing smaller, Doll,” he says. “Not one damn thing.”

On my way to deal with our old cash register I call out really loud, “Hey Jeb, middle pump hose is feeling squirrelly. It might need looking into.” Jeb isn’t here. He’s off with his kid at little league. So of course, no Jeb appears to check the hose. I shrug as if Jeb answered me and glance at the pickup. Sure enough, pickup dude winks to show he’s not been fooled.

I ding the register open and take my sweet time in getting him his ninety-six dollars in change, hoping another car will come along before I have to go back out there. First I slip out limp dollar bills till I get to the end of ones at 37. Before I start on fives I swish twelve quarters out of the trough. I’m good at math, though now in my senior year it’s advanced trig.

There’s a long beep of the pickup’s horn to prove it works. His right arm is hanging limp out the window. Dangling down.

This is where, if Calley was working my shift, she’d be calling her boyfriend to drop by, his shotgun riding his gun rack like a trophy. Calley works the times when I’m looking after my grandma Lily till Uncle Earl comes home. Gram like to hear about my life. School. Classes. Awards. She has big plans for me, always has, which is why I have big plans. It’s simple math. I make Grandma Lily Jello almost every day. Her favorite flavor is cherry. There are red dots on all her clothes.

With the quarters cupped in my palm, I’m at 40 dollars now and ready for fives. Dimes are tempting, but I don’t want to stand there beside bandana-man’s window counting dimes into his sweaty hand. The horn again.

College says I have to work for tuition, and I’ll be glad to leave this gas station job behind. Mostly I’ll be working in the cafeteria, wiping down chairs, hoping for no food fights, “keeping the cash registers honest” they said, once they heard about this job.

I’m still on fives when pickup dude calls, “Hey babe, you need me to help you count.” His door squeaks open and clunks shut and now he’s leaning back against his truck, thumbs tucked into the frayed pockets of his jeans. What the hell? This is the first time he’s crawled out of his truck.

I reach for Jeb’s gun from behind the rack of candy bars and chips. Tuck it into the back of my jeans. When I got hired Jeb said, “Use it if you have to. That gun ain’t here for looks.” I sling the register shut and turn around. It is fate.

Later that evening, before I start on homework, I tell grandma how it felt–the solid weight of the gun in the small of my back. Her spoon pauses, and a lump of Jello shivers waiting, her eyes glint. My grandmother is all ears for anything I have to tell, and I know from stories that both she and my grandpa were hell-raisers. Him raising a few skirts here and there till her shotgun kept him home. And his stories of her lucrative liquor business don’t leave her coming off like any saint. I suspect I take after her.

I give her a second helping of Jello as I describe how, after I was done counting ninety-three dollars in bills, three in quarters, it felt like I was carrying a green bouquet out to that pickup. The dude was still leaning against his driver’s door, exactly my height. He was grinning like a fish.

“So, I’m almost to the pumps when I drop the quarters on the oily pavement.”

“Oh no,” Grandma says. Her spoon jabs the Jello.

“Yep.” But I tell her I dropped them on purpose. I describe how they spun around and around and finally twizzled to a dead stop. Grandma is grinning and nodding now as I tell her of course I had to pick them up. I had to bend low and I guess my blouse sort of billowed out as I scrabbled in the dirt for those quarters. She says, “I’ll bet you stooped just low enough for him to see the gun tucked into your jeans. “

I tell her he said, “Whoa, Doll,” holding up both hands. “Forget about the quarters.”

“You got him,” Grandma says.

I say, “He was back in his pickup like a rabbit diving into a hole.” Then I describe how, being honest, I tossed the ninety-six dollars through his open window as he was turning the key. Then I backed up fast as his tires spun out leaving me and his quarters behind.

“I hope you picked up those quarters,” grandma said. “Them’s quarters for your college.” I had to scrub my nails hard, but I told her yes.