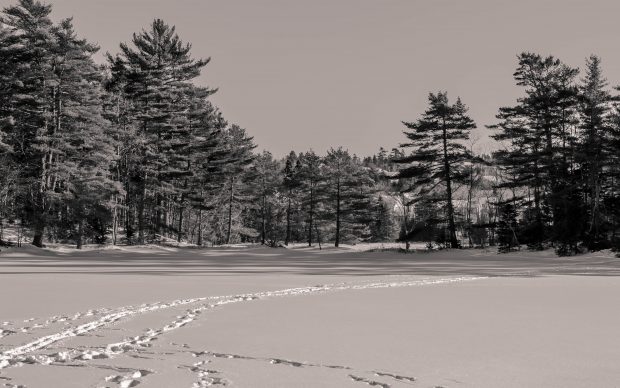 Everyone was home for the wake, even those who were tired from sitting with Papa Ned and waiting. He had made them wait so long. The floors in the house were pickled with sand and salt from people wearing boots inside. It was April, but spring was coming late. Snow lay heavy on the fields; during the day it melted and packed down, and at night it froze again. The light was coming back, though, and the snowshoe hares were changing color and were mottled, like they always were this time of year.

The morning had been gray, you could say pearly, but the clouds were thinning and it looked like the sun might yet show itself before dark. One of the younger boys wanted to go outdoors before supper. Sam said if Papa were still here, we wouldn’t be sitting around indoors; we would all be out checking sap lines. But nobody had tapped the trees and there would be no sugaring off this year. Sam was looking out the window; he thought about the taste of sugar on snow, how it came from the trees and sky, but tasted of earth, parsnips, and the garden.

Finally Sadie, one of the older cousins, put on her coat and took him outdoors. They were just going to walk back to see if the ice was breaking up on the beaver pond below the fourth field. The fog was lifting in the pines, and the fine wet branches at the tops of the beeches looked like black veins against the hazy sky. Anybody watching from the living room could see the young people go out of sight, slipping under the second bar gate and dissolving into the woods.

Now it had been at least an hour since they went out of sight, and anybody watching could see Sam and Sadie coming back the way they had gone and stepping into the prints they had made going out. They were crossing the first field and were almost to the big boulder in the middle when they stopped. They were looking at the ground. The boy was counting springtails. The girl was noticing how the snow had changed and looked like frozen tears, the way it did after Nanna had poured the hot syrup over the fresh-packed pan of snow, and you were waiting.

The two stood up and started walking again. They were warm now and their coats were open. Sam’s was worn at the cuffs and the waistband and suddenly looked too small for him. It had a patch on the chest with a gold lion and under the lion it said “Scotland The Brave.” Papa had given it to him, and Nanna had sewed it on when the jacket was new. Now the patch was coming off and curling, and the lion’s head and the words had disappeared and you could only see the lion’s feet and the brush of its tail.

Sam and Sadie stopped again. Later they would tell that there was a sound coming off the field, like a long sigh or whisper in the woods they had just passed through. Like the whine the ice makes when it starts to break up on the pond, or the humming in an electrical circuit that is shorting out. But the pond was too far away to hear the ice break up, and the power line was a mile away.

“It must be the wind,” Sadie said.

“But there isn’t any wind,” Sam said.

“Me neither!” Sam said. Then he started to run back. As he ran, he had remembered how when Papa laid on the couch all winter, he had told him he wasn’t afraid of anything anymore. In a soft voice, Papa had said that after he died he would become the fields, the trees, the rocks, the North Star, the sun, the clouds, the snow, the moonlight on the snow, the white hares in winter and the brown in summer, even the maple sugar. All the things he loved he would become. And when you are outdoors, his grandfather had told him, I would still be with you. That was when Papa knew he was only dreaming, the boy thought, before he was sure there was a real Abenaki camped behind the springhouse.

When Sam ran, Sadie had stood still, like when they played freeze tag at recess. Then she zipped up her jacket and walked to the big rock and leaned against it. She wanted to show Sam there was nothing to be afraid of. She wanted not to be afraid of anything. On top the rock was a big roll of barbed wire. Papa had wanted to get all of it out of the old-line fences, and the fields, and the woods, but he was always finding another line to pull. There wasn’t enough time in the world to get it all out.

Barbwire was pure hell, he was always saying. Even if the wire was flat on the ground it could trip you and bring you face down. You might think you had been shot, it would happen that fast. Sadie could remember the time when Papa was cutting up an old maple and he had snagged a piece with the chain saw, and how the wire had lashed out and ripped his jacket and ruined the saw. She watched Sam run up the porch and go in the house.

To Sadie, each barb looked like a tiny pair of horns. She took off her mitten and touched one of the sharp cold points. She was sure now, surer than before, that sound had not been the ghost of anyone pulling wire, or anything like that. It wasn’t so strange after all that Papa Ned had died, just that he had gone so slow.

Of course, an arrow might be swift, and whistle like that too. She thought now of the high stone ledge of the foundation in the cellar where Papa kept a beauty he had found ages ago, way back of the fourth field. Long and sharp it was, with the feathers still intact, too expensive to waste on small game or target practice. Only squirrels and crow were in season now, Sadie knew, and she didn’t like to think a hunter trying to get away with something bigger had been so near, might still be near.

From out of her pocket, Sadie drew a small copper bell she carried wherever she went. Made for a heifer, it was not half so loud as the bull bell, but it was surprising how far its fine bright sound could travel. She was going to tell Uncle Warren; this was a story he would hear. And when at last the snow melted, and the ground thawed enough for Papa to be buried, and the trilliums bloomed, everyone could go together to post all the line fences, just as they did every year.

Stepping away from the big rock, Sadie began to ring the bell, slowly at first, just to signal she was still there and she was ok, just in case anyone was listening. As she got closer to the house, she could see Sam and Warren at the window, looking for her. She began to shake the bell harder, and then she started to run. As she ran she hoped that in the morning she would find the arrow.