The men focus on their poker hands and their glasses of whiskey, preoccupied, as if the saloon is their shared workspace. No one looks up when the new gunslinger swings open the doors and ambles toward the bar like his feet hurt. Meanwhile, Jodie crosses the living room, balancing a stack of folded towels still warm from the dryer while she studies his face. Is that Fabian or Eddie “Kookie” Byrnes? She could never keep them straight. One of those pretty boys would later star in some Warner Brothers series but this was early on, when all he could get was a bit part in a Western. At least he had a career.

Where are all the women, the women’s roles? Towels put away, she crosses the living room again. Oh, there’s one now, the saloon owner, or more accurately the madam, but this is unspoken which makes it okay. The woman flits among the men, with her anachronistic hairdo and eye shadow, and her sparkly sixties cocktail dress, as if the wardrobe and makeup people can’t imagine a woman in the Old West either.

Jodie’s husband Jim has fallen asleep on the couch again. The house resembles a nursing home, with the TV blaring and no one listening, the rows of pill bottles that can’t be put away because they have to remain in that certain order. When people dropped by, she felt embarrassed when she saw them taking in the mess. But everyone’s sheltering at home now, so that problem’s gone. She reaches over Jim to poke the mute button before the hail of gunfire, but too late. Kookie is reeling through the swinging doors, twisting and falling beyond the plank sidewalk onto the dusty street, lying crumpled and bloodless. So much death and never any blood.

The sudden silence jolts Jim awake, and he turns the sound back on in time for the Marshall to make his speech. The Marshall’s killed two men in this episode. That she’s noticed while walking back and forth from laundry to living room.

And who is the heroine? Not the madam or the school marm. Not any of those voiceless women out in the street, mere extras milling around in sunbonnets and swirling skirts. No, the heroine’s out in the territory, holed up alone in the red rocks, riding through canyons, the Rockies standing guard behind her. She must keep vigilant, because death can turn up anywhere like the dangerous men following her on the trail. But she can use the landscape against them, crouching in the rocks high above and picking ‘em off, one by one.

In the kitchen, Jodie corrals her homemade mask, her Clorox wipes, and her hand sanitizer from the whiskey company for the trip to the grocery store, and her hands start to shake. This is the only time it gets to her: that fear of bringing the danger home to her 80-year-old husband, whose lungs are already filled with fluid. The virus would be lethal, hell, a nursing home would kill him, especially now. “I’m going,” she calls out, and he answers, “Be careful.”

She climbs on her horse, pulls a bandanna over her nose, and rides into town guns blazing, or so she imagines as she wipes down the steering wheel with whiskey sanitizer. Then down the hill on the short drive into town that was once unremarkable, and past deserted city blocks. In the parking lot, she assays the number of cars, adjusts the mask, checks her sidearm, and hopes to avoid some greenhorn with an itch to prove himself. She’s resigned, ready if it comes to that. She’s no coward. 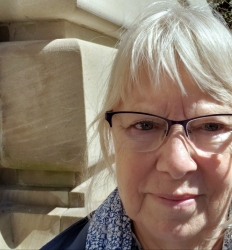 Reba Leiding
Reba grew up on a family farm in downstate Illinois, back before they disappeared for the most part. After wandering in the employment wilderness for several years, she became an academic librarian, ending up at a university in Virginia’s Shenandoah Valley. A few years ago she retired to Traverse City, Michigan, both because it’s beautiful and because it isn’t rife with chiggers and snakes. She began writing in earnest while still a librarian, as a way of reminiscing about life before the Internet, and continued into her retirement, during which she assumed, wrongly, that she would have more time.