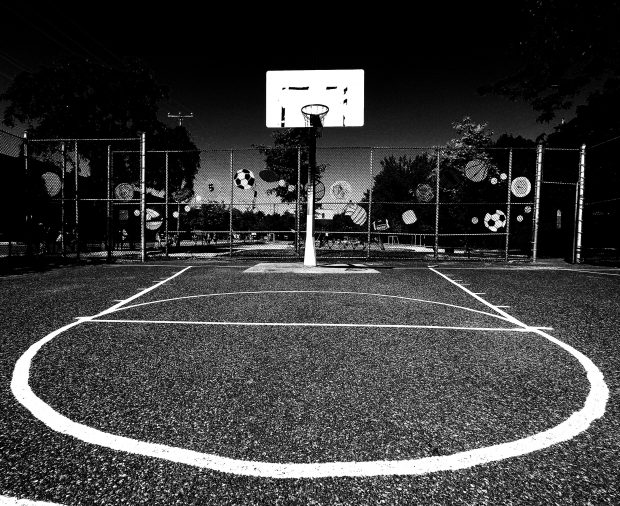 Sitting on a basketball at half-court, Jim is telling the boys the fundamentals of the game. Mason and Jimmy listen intently. Well, as intently as can be expected from a five and seven-year-old. Everything is just so interesting on a warm, sunny day in the suburbs: a kid sliding down the nearby playground equipment, workers repaving a residential driveway across the street, birds doing bird things. They’re alone except for those birds pecking at something near the border between asphalt and grass that surrounds the court.

It’s a day off on the weekend, which in retail is sacrosanct. A high-holy day all in itself. Usually, when Jim has a day off he works a side-job, today he’s got nothing going on. Part of him feels guilty, though. Always.

“That area there, right around the basket,” he says pointing at the 15 x 12 ft. rectangle, outlined by fading white lines. “That’s where the game is won and lost. The paint. That’s your house and you protect it at all costs.”

On South Side, Jim started playing down-low because of his size but stuck there because of his heart. In the paint the grace of the game, at times an intricately choreographed dance, devolves into gritty survivalism. Elbows fly, knees drive into thighs, one of those fast, graceful skinny motherfuckers comes in weak thinking he can get an easy layup. As they ascend towards the rim with visions of two points, perhaps a gentle finger-roll, to just flip the ball into the rim, Jim knows this man’s fantasy needs some reconfiguring.

“In the paint, nobody gets anything easy.”

He pushes his glasses further up the ridge of his nose, rubs his bushy, black mustache, then adjusts his high grey tube socks, two red stripes running around the top. His shorts are short. Really short.

He decided against a shirt today since it’s so hot, plus he can show off his muscles, which don’t exist to anyone but himself. He flexes bones. Skin, the color of cocoa butter, blue eyes, a poorly done flattop cut by his mother, Mason’s always running low on patience.

“That’s all you ever wanna do,” Jimmy says.

“Boys, listen and learn something.”

Mason grunts. A ball hog. All attitude with an inability to hide whatever he’s feeling.

“Stand up and I’ll show you two how it’s done.”

The boys spring up, while it takes Jim longer to unfold his large frame. Standing upright he towers over his young sons descending in height by age and hues of brown, covering the spectrum so fully that only one of them is even called brown.

Jim is dark-skinned, the prevailing idea of Black in America. Jimmy is swinging his arms through the air in some approximation of the stretches he’s seen basketball players do on TV. Copper-complexioned he’ll be asked the rest of his life where he’s from and hear guesses anywhere from Central and South America, North Africa, South Asia, and the Middle East. He’ll let them down every time he says he’s from Chicago. Mason is high yellow. All brown. All black.

As soon as Jim stands, Mason grabs the ball from the ground, throws it ahead of him, chases it down, takes two dribbles, comes to a complete stop in front of the basket, pulls the ball back like a shot-putter, sends it over the front of the rim to the white polymer backboard where it thuds before rattling through the chain link net. Turning back towards Jim he shakes his head and flexes his bones in celebration. Jimmy gets the rebound.

On these courts, the sweet snapping swish of the ball through a nylon net is replaced by jangling reminiscent of loose change that the chain link provides. Much more durable for the bipolar weather of the Midwest, but also more dangerous for fingers.

Awaiting further instructions, with the childhood inability to stand still while holding a ball, Jimmy attempts to spin it on his finger. Looks so easy. He quickly finds out it’s not. Spin, smack, drop, bounce. Spin, smack, drop, bounce. He settles for trying to balance it on a finger, no spin. He just ends up running in tiny circles trying to keep the ball from the asphalt as it wobbles every which way.

Catching the ball from Jimmy, he gives it a shot and fails. Tries again… fails. His face scrunches up, the ever-present dimples in his squirrel-cheeks compete with the wrinkles at the bridge of his nose to show his frustration. He smacks the ball with one hand, switches and smacks it with another, as if there’s some answer to this mystery inside the sphere.

“Betchu guys can’t do this,” he announces to his family.

Mason wipes the ball on his bare stomach, tilts his head back, alllll the way back. Then holding the ball above his head with both hands, gently sets it into the groove between nose and forehead, then let’s go. His neck and shoulders wiggle, hands up and ready to catch the ball if it falls.

Jim and Jimmy lock-eyes, both laughing.

“Your brother’s got no sense.”

Mason keeps the ball balanced for all of five, six seconds. When it falls he celebrates with the same enthusiasm he showed after making a basket.

“Now pass the ball here,” Jim tells Mason. The ball’s disproportionately large in the boy’s hands. A thought that never occurs when grown men shoot around. Effortless moves, a chest-pass, a lay-up, a free-throw, all seem to require every ounce of strength his boys have.

Mason reaches back and lets go, the ball makes it to Jim in a bounce and a half.

“That’s not what dad said. The game’s in the paint,” replies Jimmy, a constant check on his brother’s impulses.

“Exactly, boy. All the best teams always have a big man controlling the paint. Wilt, Bill, Kareem, Moses, and Chocolate Thunder! All you kids out here tryna ‘Be Like Mike,’ now.”

In Chicago, the history of the game reaches beyond professional contracts into the high schools and the playground. From Jim’s alma mater, Hales Franciscan, people expected Sam Puckett, a smooth All-American point-guard to do great things in college and the NBA. Neither happened.

Dribbling to the block, Jim shoots a standard layup, right hand rising, balancing the ball on his palm, jumping off his left foot, right knee rising in unison with his arm as if an invisible string connects knee and elbow. The ball banks off the backboard and in.

He tries to think of the last time he played a pickup game. College, maybe? A few years after? Whatever the moment, it certainly didn’t have the gravity then that he’s feeling it should have now.

“See. That’s the easiest shot in the game. It’s simple. You want to get as close as possible, as often as possible. That’s why on defense you have to keep them out of the paint. You give these shots up and they’ll take advantage of you all game. If someone thinks they can get something easy from you once, they’ll keep coming in and testing you until you stop them.”

Jim passes Jimmy the ball. The boy dribbles it toward the right-hand side of the rim and takes a shot. Jimmy jumps off his right foot, instead of his left, the ball hits off the bottom of the rim and comes off it with a loud clank. The ball ricochets and hits Jimmy on the top of his head with a hollow plonk.

Jim smiles and Mason laughs, while Jimmy, embarrassed, runs after the ball which shot off the court onto the surrounding grass.

“That was alright, but you jumped off the wrong foot. You’ll get it next time. Let your brother try.”

Jimmy, still on the grass, reaches back and throws the ball to Mason football-style.

For Mason, smaller and weaker than his older brother, basketball 101 is still a physical impossibility. In order just to get the ball above the rim it’s essential for him to get in a deep squat, cock the ball back to his ear, and catapult it. The ball bounces off the backboard and in. Before it jangles through the net, he’s already grunting and flexing bone.

“You made it, but practice isn’t always about making shots. It’s about learning how to play the game right.” Jim means to deflate Mason’s ego, just a bit.

The boys go through a few more rounds of layups, the ball gaining a gritty, dusty feeling. It ricochets off the rim into the grass, through wood chips in the playground, and into the street a few times, Jim shouting as the boys begin to run into it absentmindedly. His deep, loud, voice stops time, the boys freeze immediately, then look both ways. Of course, no cars are coming by on this boring street.

They run up a small grass incline back towards the court. Jimmy has the ball on his hip, and it’s just as wide as his waist.

“Here. Pass it again,” Jim says, thinking about the next lesson. Raising it above his head Jimmy hurls the ball towards his dad.

Jim has to keep the boys shooting to keep them interested, but they can shoot layups left handed without mastering their right, plus they’re not strong enough to shoot anything other than layups. The key to the game isn’t offense anyway.

He knows the game is really all about defense. Defense and rebounding. Anybody could do these things, but the key is they have to want to. It can’t be faked. Thankless toil, the drudgery that builds winners, that builds champions, an attitude, unrelenting persistence. Brings you nothing but bruises, welts, and floor burns. Your body, you give to the team, a sacrifice. You can’t let them down. 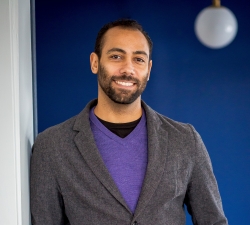 James Stewart III
James Stewart III is a Black writer from Chicago. He earned an MFA from the School of the Art Institute of Chicago and an MA from North Central College. He is currently finishing a novel about the daily struggles of a multi-racial working-class family and the costs they pay for loving each other. He also co-curates a text-based performance series "The Guild Complex presents Exhibit B" and is a managing editor of the magazine Critics’ Union. Stewart works as a paraprofessional with special needs students at a high school in the Chicagoland-area.

James Stewart III is a Black writer from Chicago. He earned an MFA from the School of the Art Institute of Chicago and an MA from North Central College. He is currently finishing a novel about the daily struggles of a multi-racial working-class family and the costs they pay for loving each other. He also co-curates a text-based performance series "The Guild Complex presents Exhibit B" and is a managing editor of the magazine Critics’ Union. Stewart works as a paraprofessional with special needs students at a high school in the Chicagoland-area.