Pangyrus presents Generations, a new column about family. Generations shares the most complex and heartfelt stories in the human existence, the stories of family. Whether by birth, choice, or circumstance, each of us is a part of a family with a story to share.

Family lore has it you took me cruising in Maine when I was six weeks old. Five of us set sail on a 24-foot fiberglass boat: you, my mother, the man who would become my godfather, his new girlfriend and me. The boat was named Apteryx — a small, flightless bird from the other side of the world, now nearly extinct.

For three weeks you sailed in and out of inlets on the craggy coast, spending days studying charts and tides, and nights in bars hard by the docks, presiding over tables laden with plastic pitchers of beer and piles of shattered lobster: carapaces and claws, tails and antennae. We were all becoming something new: past lives being rendered extinct, new roles climbing out of their shells and creeping soft-bellied into the world. I imagine we five boarded Apteryx as an odd quintet and disembarked a different crew entirely. I imagine, too, that you knew then who it was you wanted to be: a captain.

That it took you the better part of fifty years and the entirety of a marriage had to have come as a surprise. But still, you persevered. And there’s something to be said for that.

We — my brothers and I — had glimpses of the man you were straining to be. We caught sight of him on family trips to the beach when you shunned our attempts to build castles in the sand and corralled us instead towards the nearest watercraft: a raft, a dinghy, a Sunfish. You were happiest when you were afloat.

But Mom’s drive was unrelenting. She loved being behind the wheel and her outsized bearing left little space for a co-pilot. You were a passenger on her terrestrial journey. We all were. And though in the beginning she was a steady driver — reliable with only occasional bouts of automotive madness — towards the end, she was a menace, driving long distances with a patch over one eye, a Swiss Army knife tucked in her bra, a dog in her lap, a six-pack riding shotgun and two handguns in the glove compartment. It’s a miracle she’s the only one who didn’t survive.

I do not blame you for being absent the night she died. There were already three of us in the small unfurnished room that held her rented hospice bed. We’d dragged in chairs and placed them in the only available corners. You must have come up from downstairs, read the room the way a sailor reads the ocean’s shifting surface to divine when he’s about to get blown off course, and determined you’d take shelter elsewhere.

I do not blame you for those many times you traveled North and dropped Mom off at the door of my building so that I could drive her to Mass General, sit while she had her treatment, and bring her back to the spare room of my apartment where, for three days, she’d drift in and out of awareness, sweating through her worn flannel nightgown and dotting the pillowcases with blood. You must have known those waters were too turbulent to weather.

I do not blame you either, for all of the times you asked me not to tell my mother about school or a boyfriend or travel or my job for fear that it would displease her. Or for the times you did ask me to talk to her, to step in between you two deeply divided in argument and soothe her inflamed temper. It’s a role no daughter should play: translator, or worse, interpreter. But your inner mariner must have thought you were navigating hidden shoals and steering us all to safer harbors. When, really, our family’s boat was taking on water at a fatal rate.

You became a wifeless husband the same night I became a motherless daughter. Neither one of us knew how to make sense of the shape of our new role. A motherless daughter is a strange creature, quite unlike a fatherless son, who can settle into the vacant seat at the head of the table and carve a Thanksgiving turkey. A fatherless son is a beast drawn with spine-straight lines and sharp angles. A motherless daughter is a collapsing oval. Her path isn’t linear. In the absence of her lifelong point of orientation she might circle for quite some time before she grooves a new orbit.

But you, unmoored from your wife, took on the one role you’d long coveted: captain. And in so doing, you led us to the one place that made sense: the sea. You’d lost your mate. And I my mother. But in her absence we created a crew, walked arm in arm down an emotionally splintery dock, and stepped off the edge of the terra firma we’d known most of our lives.

Within a few months of her death you’d purchased a small wooden sailboat and loaded your family aboard. Your grandkids were delighted. The following spring, for Fathers’ Day, we made you a shirt that said “CAPTAIN” in big block letters. And I made the kids shirts that said “crew” in a lowercase typeset that fit across their little flightless bird chests. And like that, we set sail, our roles and responsibilities spelled out for all to see. We took short jaunts through the harbor to gawk at the mega-yachts and cruise ships. And we took longer voyages to collect seashells at low tide on newly-exposed sandbars.

A year later, you succumbed to your grandkids’ thirst for journeys even farther afield and you traded the sailboat for a hull with an outboard engine. Now we could go fast. And far.

On the new boat we sped out to the Vineyard, the first home our family had known four decades earlier. En route you and I filled the kids’ heads with stories of beaches and sharks, lighthouses and bridges. Your grandchildren were eager to sound the depths of their courage by jumping off of Jaws bridge, a summer rite of passage. That year your grandson — just eight years old — had discovered a fear of heights. He was happiest, he had learned, with his feet planted firmly on the ground and I wondered whether he had it in him to take flight.

We left the bridge jump until our last day on the island and the weather was unavoidably stormy. The sea was too riotous to set an anchor and the wind was blowing hard out of the northeast, carrying with it sheets of fine rain. There wasn’t a single person on shore. Not one.

I remember studying you at the helm as we approached the matching stone jetties that frame the bridge. Your jaw was set and your head was shaking back and forth. No, you were saying. This is unwise. But the grandfather in you must have had a talk with the captain and the next question you asked me was: “How important is this to them?” I told you. And then you popped the engine into neutral and shouted two generations upwind to the duo on the bow: “You ready?”

The gravity of the moment hit all of us like a fist to the heart. I kicked off my sandals and stripped out of my denim shorts. What a strange creature I must have seemed: barefoot on deck in the rain, in a red polka dot bikini, bent over my children, frantically zipping them into lifejackets. I locked eyes with you — father, grandfather, captain — and nodded curtly at each of my children, obtaining their silent assent that we were going through with this trial on this day. And then I leapt. Off the boat. Into the water.

As soon as my head broke the surface I spun around, legs churning beneath me, and held my arms up to my children. “Come on,” I said. “Jump!” And just like that — like obedient, tiny birds unassured of flight — they jumped. First one. Then the other. I was stunned. At their bravery. At our faith: in one another, three generations, all of us.

Once in the water, the leap from the bridge was a foregone conclusion. No one jumps just once. Not after you feel the heady rush of willing yourself to trade the certainty of solid ground for the unceasing possibility of the sea.

I do remember, though, climbing out of the surf and up onto the sand, and running, soaked and laughing, to the top of the bridge. I remember standing on the weathered wooden railing, poised twenty feet above the ocean’s surface, one of each of my children’s hands in mine. I remember looking for you, tossing about in a boat, our fixed point on the horizon, and finding you, your one hand raised in acknowledgment of our pending triumph, the other on the wheel.

You saw us clearly. And we saw you. And then we jumped again and made our way back to you. 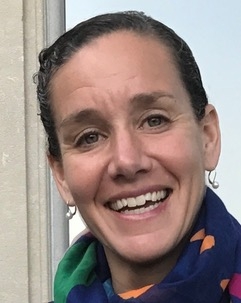 Amory Rowe Salem
Amory Rowe Salem graduated from Princeton University. She's worked as an educator and a nonprofit executive and has recently turned her attention to writing. Her essays have appeared on NPR’s “Only A Game” and in WBUR’s Cognoscenti, The Rumpus and Solstice Literary Magazine. You can find her archived work at amoryrowesalem.com. She lives with her family, a dog and a flock of chickens in Cambridge, MA.