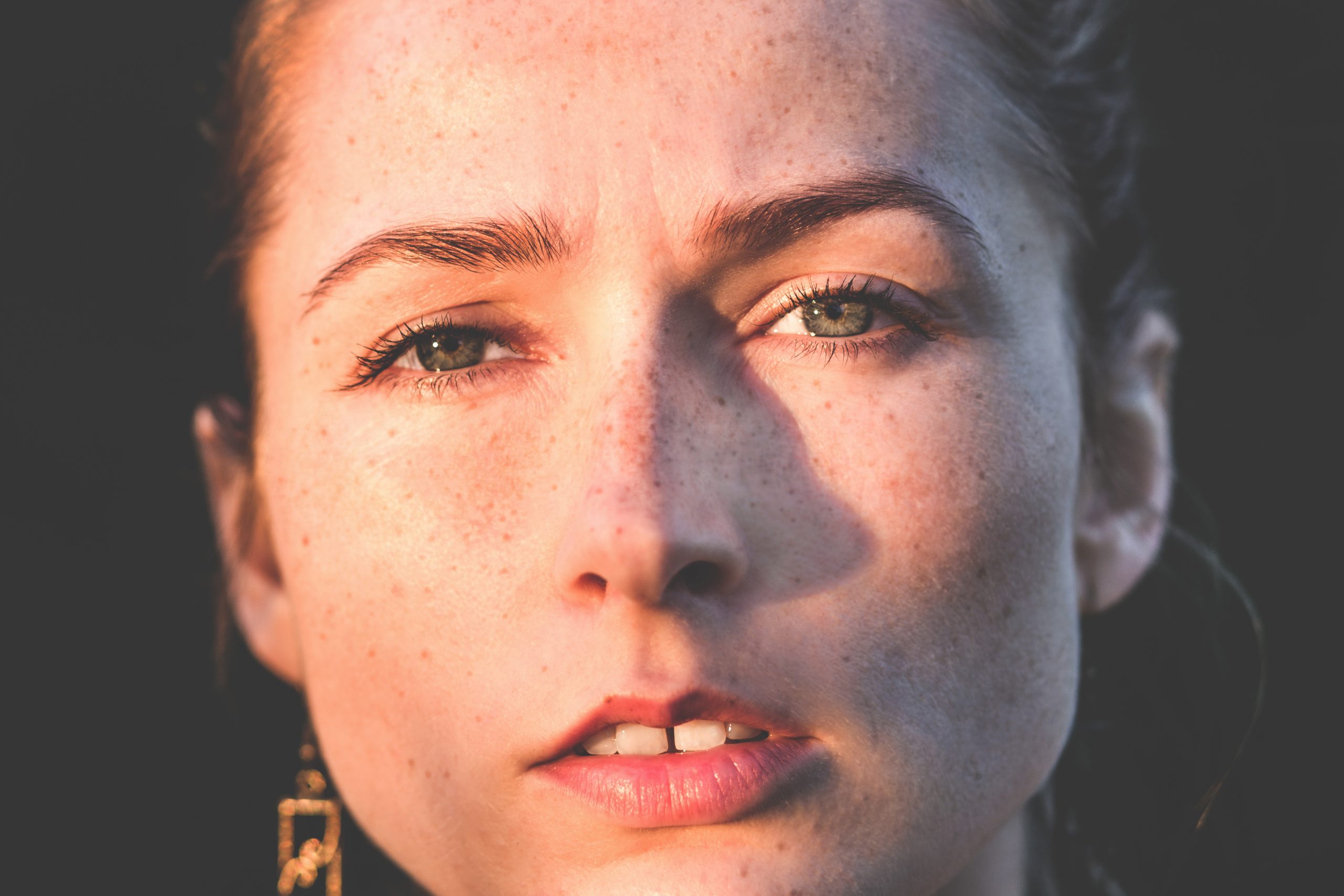 As a young adult, I wished for braces, often wondering why my parents never got them for me. I rarely went to the dentist. We weren’t a yearly checkup type of family. We went to the doctor when there was a problem. If it wasn’t broken, we didn’t spend money fixing it.

As an adult, I’ve managed to get over my fear of the dentist enough to go a handful of times. A cleaning here or there, and the removal of my wisdom teeth, several years apart. I put it off until it hurts, until the underlying pain manifests itself into something I can no longer treat.

Whenever I begin to have pain issues in my gums or teeth, I fret and fuss for weeks until finally making an appointment. Before my most recent visit, it had been years since I had gone. I worried about being scolded – I don’t floss enough, I drink too much coffee or diet soda, and ever persistent, there was my gap. Always there, reminding me of all the empty spaces between who I am and who I thought I should be.
__________

According to Bernice Agyekwena, a Ghanaian journalist and Gates Fellow of African Agriculture at UC Berkeley’s Graduate School of Journalism; in Ghana, Namibia, and Nigeria, a gap between a woman’s teeth is a sign of beauty and fertility. This is something that is sought after, an attractive quality for a woman to have.

I don’t know that I have ever considered myself beautiful. As an overweight kid growing up in a town of 5,000 in upstate New York, I couldn’t imagine that anyone would look at me and think that, let alone say it. Of course, there were people who said it. That gentle praise of relatives and well-meaning strangers did boost my non-existent confidence, on occasion.

While I was teased often and loudly as a kid, for many things, the gap in my front teeth was my own private hell, reminding me that one more thing was out of place, was wrong. I kept my lips pursed tightly in photos, never wanting to show the spaces between my teeth for fear it would ruin the shot.

In the mirror, I saw cracks in everything looking back at me. Teeth that were too big, and too far apart. Lips that were large and full and attracted far too much attention at far too early an age. “You have DSL,” a friend told me, some time in middle school. It didn’t take me long to understand what they meant. Dick Sucking Lips. These compliments, or so I saw them as, were what I focused on to make up for the cracked pieces.

Then, later, there was the sea of men, crawling into my life one way or another. Beautiful, a word occasionally whispered by one, if not several of them, a term of endearment that I’d come to see as bait, a hook carefully worked into my mouth to lure me in. Catch and release, gasping for breath in between.

On more than one occasion, my grandmother brought up my gap in casual conversation, asking my mother why she never got my teeth “fixed.”

Sometimes, people who love you can point out your flaws or insecurities without meaning to hurt you, but that doesn’t make it hurt any less. They want to show that they want what they think is best for you.
__________

In season 6 of America’s Next Top Model, Tyra Banks advised contestant Danielle Evans to make the gap in her front teeth smaller, despite Evans’s protests that the gap was part of who she was. Evans eventually agreed to make her gap smaller, and went on to win the competition that season.

The makeover episodes of ANTM, where promising models were transformed, were always my favorites. When their hidden potential was fully realized and they became the high-end models that Tyra saw living within them. Tyra’s choices often reflected the trends of the times, along with influences from her own career and years of experience.

Those episodes were always my favorite because that was when the contestant gets to become a better version of themselves. What I didn’t realize at the time was that it wasn’t a version of themselves that they had been imagining, but one that someone else had. Someone else looked at them, made a list of all the things that were unacceptable about them and “fixed” them until they were tolerable enough for public consumption.

Conversely, in 2010, during season 15, Tyra advised contestant Chelsea Hersley to have her slight natural gap widened to mimic Lauren Hutton. She came in second place.
__________

My weight continued to fluctuate for years. My thin hair never really changed, but I found new means of expression in shades of blue and pink. I obsessed over my skin, gave up dairy for intermittent periods, bought only Korean or Japanese products that were supposedly revolutionary for half the price of American ones.

I tried to fix, cover, repair or change everything I didn’t like about myself – often adapting the habits of others in hopes that a small fraction of whatever they were doing right would translate to me.

I think about all the years I tried to “fix” parts of who I was. I tried to reach an “acceptable” weight. I perfected my makeup application and wore “flattering” clothes for my figure. I hid my smile. I tried to fix everything that everyone ever told me was wrong.
__________

In Chaucer’s The Canterbury Tales, Chaucer wrote of the “gap-toothed Wife of Bath”. As early as this time period, a gap between the front teeth, particularly among women, was associated with lustful characteristics. Thus, the implication in describing “the gap-toothed Wife of Bath” is that she is a middle-aged woman with an insatiable lust.

I think about all the years I opened my mouth and said yes to a man just because he wanted me to – not for my lust, or my insatiability – but to please.

Lust and vulnerability are so tightly drawn together for me that it’s hard to feel one without the other. That moment when the air changes around you, when you’re caught staring at someone’s bottom lip – there’s a millisecond of anxiety just before the fever pitch of frenzied mouths and roaming hands. Like the drop in your stomach as you get to the top of the roller coaster. You know the drop is coming – but will they reciprocate, or reject you? Will you walk off the ride unscathed, or plummet to your death?

It doesn’t surprise me when a thrill runs through me at my dentists’ instructions during my most recent cleaning – excitement mixed with anxiety and suspicion. His touch is anything but intimate, fine instruments stretching my mouth wide.

His voice is soft and calm, demeanor completely professional. I know I’m the one who’s weird in this scenario. He probably says some variation of these words multiple times a day.

I have spent my whole life trusting by default, so I open up. I’ve also spent most of my adult life acquiescing to the requests of strange men.

In an article in the International Journal of Dentistry, the authors posit that fear of the dentist is linked to past traumas, particularly sexual abuse: “Perpetrators frequently groom vulnerable individuals by starting with activities that appear safe. They often attribute positive motives to their sexual behaviors, which suggest love or necessary education.”

Most of those requests, from strange and unyielding men, in one way or another, ended up involving my mouth.

They were sometimes less of a request and more of an expectation.

Sometimes they just happened, without warning or consent.

“In a dental setting, patients are asked to trust the dentist, who frequently assures patients that even though they may experience painful or unpleasant situations during the treatment, it will be beneficial for them in the end.”

His instruments are exploratory and stretch around my lips and gums with quiet care and detail. He is, in fact, incredibly gentle. There is no scraping, no violent tugging feelings as he coaxes any unwanted buildup from around my gums.

His eyes move to the gap, and he gestures with the tools in his hands.

“It will be beneficial for them in the end.”

An archived article of Metro says that the French refer to gap teeth as “dents du bonheur”, which translates as “lucky” or “happiness” teeth. The expression is thought to have originated in Napoleon’s time. When the Napoleonic army recruited, soldiers were required to have incisors in perfect condition because they had to open the paper cartridges (containing powder and ball) with their teeth when loading their muskets. All those who had gaps in their teeth were classified as unfit to fight. It is speculated that some men may have purposefully broken their own teeth to avoid going to war.

Can you imagine it? A broken smile being what saves your life.

All these years later, so many of us crave a perfect, Hollywood smile. I wonder if the monetary cost is anything compared to what it may have been, had we been granted perfection in a different time.
__________

On a warm May evening, I walk into the Modcloth store in Soho with a friend, indulging in some retail therapy. I browse around until I find a sample size of a t-shirt I’ve been eyeing, and ask the nearest employee for it in my size.

He’s my height, dark eyes and skin complemented by a leather jacket and well-fitting jeans. All black clothes, a black hat perched at an angle on his head, completing the ultimate twenty- something New Yorker look.

He greets me with a dazzling smile and asks what size I need. His teeth are brilliant white, fostering instant jealousy from me. Momentarily distracted, it’s then that I notice his gap is almost identical to mine, if not a little wider. He’s so confident. I can see it in his eyes, his walk, hear it in his voice that doesn’t just sound like a monotone customer service voice.

When I open my mouth to tell him my size, he smiles even wider and interrupts me before I can respond.

I’ve managed to find moments of happiness in my appearance in recent years. As my perspective on my appearance has changed, particularly surrounding my gap, I find that every now and then, in the mirror, the word beautiful crosses my mind. It’s not a complete change of heart, but it’s a move in the right direction.

I consider myself lucky for so many reasons, though not many of them have to do with my teeth. If summoned to war, I doubt that I’d have to resort to the same things those in Napoleon’s time did. My lack of a perfect smile would not save me from the trenches.

I am lucky in love, lucky in health, lucky to know an insatiable lust for all things beautiful and strange.

I have stopped wishing to fix my gap, because the spaces between who I am, and who I want to be – or who I think I should be – no longer scare me.

It’s a vulnerability I’ve learned to offer up. Here I am, gaps and all.

Marcella Yakalis
Marcella Yakalis is a nonfiction writer living in Brooklyn, NY. Her work has appeared in xoJane, The Billfold, Bustle, Columbia Journal, and elsewhere. She holds a BA in English Writing Arts and Journalism from SUNY Plattsburgh and an MFA in literary non-fiction from Columbia University's School of The Arts. You can follow her on Twitter @marcellakomisky