I recently learned two bits of news that chilled me marrow-through: my childhood skating rink is going to be torn down and Madrid is using a skating rink as a makeshift morgue for coronavirus victims.

I went to Robert Crown Ice Arena in Evanston, IL most days after school; some days before, too, if a competition was coming up or I had an extra session with my coach. An hour of Figures, slowly etching giant eights onto the ice, then an hour of Freestyle, when I could blaze across the rink, leaping and spinning and practicing my routine du jour. That whole building is so alive inside me—the brown speckled rubber floors, the large square benches covered with carpet, cubbies beneath for our shoes, the scent of hot dogs rolling under a heat lamp in the snack bar, the way the frigid air burned my nostrils when I neared the ice, the satisfying groove a blade carved after a clean jump. I could draw you a map of the building, offer a story or sense memory for every square foot. My mind can barely comprehend it not being in the world.

My mind can barely comprehend what’s happening in the world now, all those mounting figures, bodies laid out on a rink in Madrid once teeming with grace and speed. I wonder how many of those people had figure skated at this very rink, had fallen or soared within its walls, how many of them had laughed there, not knowing some day it would be full of corpses, that they’d be among them.

I think about where I live, North Lake Tahoe, and wonder where mass amounts of bodies could be stored. We’ve had a mild winter—all the outdoor seasonal rinks have closed—but snow has been falling in earnest again lately; it’s made our quarantine feel all the more surreal, like we’re sheltering in place inside a snow globe. While it’s more likely a temporary morgue would be set up in the casinos or convention center down the mountain in Reno, I find myself imagining corpses lined up in the snow at nearby Mount Rose Meadow like fish on beds of crushed ice. I wonder who I would know among them, wonder if I would be there, too. I’ve been sick for weeks now. It’s possible.

My mind keeps spiraling toward death—how could it not?—and I think about death spirals, those risky moves done by pairs figure skaters where one skater plants a toe in the ice and pivots around, holding the hand of their partner, who arches back until they’re spinning in a nearly prone position on one foot, hair often brushing the ice. I think of all the hair resting on the ice in Madrid now, all the heads of the dead, years of memory and experience frozen within them. I think about Zamboni machines, how they clean the ice between sessions, spraying water to melt away the gouges and scratches and piles of slush, freezing it all back into a smooth, glassy sheet. But Zambonis can’t always erase everything; some divots and scratches are too deep to fill, some bumps too tenacious to shave. I wonder if anyone will ever skate in that Madrid rink again. I don’t think I could, myself–I wouldn’t be able to get all those figures out of my head, the weight of all those bodies, the silenced lives and stories within them. Maybe people should only skate figure eights there in the future, sketching the symbol of infinity with the thinnest edge of a blade.

I never really liked the Figures hour of skating practice—I much preferred the thrum and rush of Freestyle—but I look back on it and it seems so soothing, so meditative, that slow, careful tracing; I long for it now. I can feel myself there again on the doomed rink of my childhood, cold air in my lungs, making circle after patient circle, leaving a mark so faint, you have to kneel down to see. 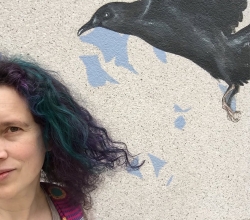 Gayle Brandeis
Gayle Brandeis is the author, most recently, of the memoir The Art of Misdiagnosis (Beacon Press), and the novel in poems, Many Restless Concerns (Black Lawrence Press.) Earlier books include the poetry collection The Selfless Bliss of the Body (Finishing Line Press), the craft book Fruitflesh: Seeds of Inspiration for Women Who Write (HarperOne) and the novels The Book of Dead Birds (HarperCollins), which won the Bellwether Prize for Fiction of Social Engagement judged by Barbara Kingsolver, Toni Morrison, and Maxine Hong Kingston, Self Storage (Ballantine), Delta Girls (Ballantine), and My Life with the Lincolns (Henry Holt BYR), which was chosen as a state-wide read in Wisconsin. Her poetry, essays, and short fiction have been widely published in places such as The New York Times, The Washington Post, O (The Oprah Magazine), The Rumpus, Salon, Longreads, and more, and have received numerous honors, including a Barbara Mandigo Kelly Peace Poetry Award, Notable Essays in Best American Essays 2016 and 2019, the QPB/Story Magazine Short Story Award and the 2018 Multi Genre Maverick Writer Award. She served as Inlandia Literary Laureate from 2012-2014 and currently teaches at Sierra Nevada University and Antioch University Los Angeles.