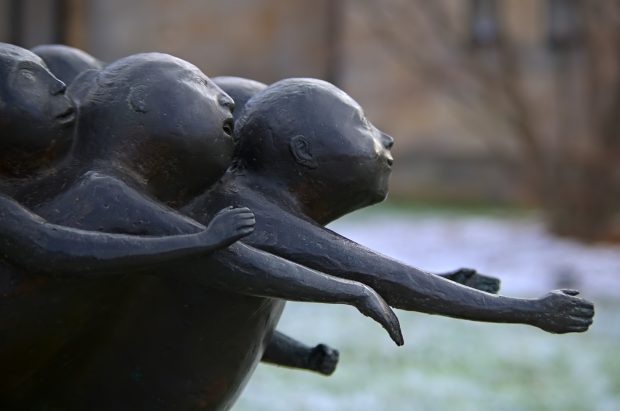 In Sickness and In Health 5

Thousands Stood Behind Her, Arms Raised in a “V”

“I saw Grandma Rosie,” he said, referring to his mother, who’d been dead for two years.

I’d flown to Baltimore early to manage my dying father’s care so my mother could focus on my 43-year-old sister’s wedding. Bonnie would be the last of us to marry, and every one of us desperately needed this happy occasion, this opportunity to shift our attention away from Dad, if only for an evening.

Because my father wanted to tell me about his speech, we sat in the hospital parking lot for ten minutes before heading inside for his weekly blood transfusion. I’d heard from Mom that he was determined to give a father-of-the-bride toast as he had at my wedding almost thirteen years before, six years before cancer took hold of a vibrant 63-year old and turned him into this frail, shriveled man, much older than his 70 years, whose rheumy eyes now regarded me from the passenger seat.

With a quivering voice, he assured me he was well enough and he’d been working on what he planned to say. I felt protective but also relieved that he believed he still had the strength. He told me a few stories he thought he’d include, some father pride stuff, and thoughts about how his own mother would have felt if she’d known that her oldest grandchild, the one she worried about because she was unmarried, had found lasting love. And to know that Bonnie’s fiancé had the same name as her beloved husband would have added to her joy.

“I can hear her now, crowing about Bonnie marrying a Bill. A Bill! He must be someone special, she would have said.”

Dad smiled broadly. That’s when he told me, as a matter of fact, that he had seen and spoken with his mother less than twenty-four hours before. I searched for the right response, to keep his spirits up. He had to know she was dead since we’d just talked about how she’d feel about Bonnie and Bill if she were alive. But my father’s kidney cancer long ago had metastasized into unreachable parts of his brain, rendering anything possible.

Dad had been a jogger for a couple of decades. He’d join a group of men and one woman several early mornings a week to run the golf course at a local country club. My mother made him come into the house through the garage, to remove his shoes in the laundry room, to leave the grass-stained trainers in the big metal sink, and to shut the door to keep the odd smell from infiltrating the rest of the house. It was not like the stinky, sweaty sneaker smell of my younger brother’s bedroom. Mixed in with the perspiration was a hint of sweet overwhelmed by the chemical cleanser smell of restrooms in public buildings.

After twenty years together, the jogging group dwindled; one by one, the forty- and fifty-year-olds developed coughs or unexplainable bleeding or all-over malaise. As one became ill, the others continued to run on the course, until another became ill. And then another. I don’t know how many from that group contracted cancer, but I do know it was greater than fifty percent. And at least one developed early onset dementia.

When I was in high school, my father, a health nut before the idea was popular, introduced me to Rachel Carson’s book Silent Spring, which warned about the dangers of chemical pesticides and questioned the scope and direction of modern science. He told me it was the most important book he’d ever read. And yet, he continued to run several times a week on a golf course that shone a vibrant shade of green in all seasons and under all conditions.

He knew his mother was dead. She’d come to him in a meditative trance.

My father had dabbled in meditation for years before his illness. Back in the seventies, he attended a Transcendental Meditation conference. He also had a book called The Relaxation Response, which he kept by his bedside, which I read in dribs and drabs and learned about this newfound passion of his that nobody outside of our household seemed to know about. As he was a reserved man who listened more than he spoke, I have no idea if his friends or associates even had a hint about his hippie inclinations.

In my favorite visual memory of my buttoned up, accountant/businessman father, he stands by an open oven, dressed in his dungarees (his word for jeans) and Earth shoes, with a tray of oats and nuts and raisins mixed with honey that would become a batch of the never-ending granola that was stored in my parents’ freezer from the time I was a kid until long after he died and Mom took over the granola making.

When he became ill, my father met with a family friend, a woman also sick with cancer, and she trained him in a form of meditation that focused on destroying cancer cells. Not long after, I visited him and Mom in Florida. Three or four times a day, he put on headphones, sat on the lanai, and meditated, capturing the malignant cells in his mind’s eye, crushing them and sending their remains far, far away.

That day in the hospital parking lot, Dad described his recent encounter with his dead mother: he couldn’t see her actual face or hear her actual voice but he knew for certain that the one and only Rose Barris Walpert was communicating with him while he was in his meditative state.

His mother stood with her arms raised in a wide V, and behind her stood thousands of other people, their arms also reaching out. It felt more real than any discomfort or relief he’d experienced during the past several years of treatments and medical interventions.

“She said,” he told me with tears streaming down the pale ridges of his face, “she was watching out for me. She would always take care of me.”

Was this a premonition of his death? We all knew it was coming soon, but he’d beaten the odds before. When he was diagnosed with stage-four cancer in 1999, his doctor said it was likely he wouldn’t live beyond five months, even with the major surgery to remove the biggest tumors. Six years later, he was about to attend his daughter’s wedding.

I asked him what he thought the communication with his mother meant.

“That I have time,” he said, still crying. “She will protect me, keep me alive, watch out for me long enough to see Bonnie married, maybe to see her have a child, maybe to watch her child and your children and David’s children grow up.”

My father gave a heartfelt toast at my sister’s wedding. It included much of what he discussed with me in the hospital parking lot. His voice may have caught when he spoke about his mother.

I saw the sadness in Bonnie’s otherwise joyful eyes, eyes that look almost identical to those of our Grandma Rosie, as she listened to our father tell her how much he loved her. I had to turn away. It was not my moment, and I felt the rush of tears pushing to stream out. I am neither a dainty nor a silent crier.

Once I collected myself, I turned back toward my father, my sister, and her Bill. The toast was over. We raised our glasses. Dad shook his new son-in-law’s hand and then he hugged Bonnie. During that long hug, the room sighed and sniffled and blew their noses.

Everybody knew what a miracle it was that Dad had survived to see his daughter wed.

Everybody knew that Dad’s fortitude had something to do with that miracle.

Everybody knew that this would be his last toast, ever.

Seven months after Bonnie and Bill’s wedding, my father was in hospice. He no longer could speak or move most of his body.

People had been coming in and out of the room all morning. One man I knew peripherally, a banker or a lawyer dressed in his business suit, had come first thing. I was the only one in the room with Dad when he arrived. The man’s eyes were red rimmed so I turned to leave the room, to give them privacy. As I stood by the door, I watched the man put a hand on my father’s arm, breathe in deeply, and speak gently. I’d intended to leave them alone, but instead, I lingered. A grown man, not a member of our family, not even a close friend of my father’s, stood and held my father’s hand and cried. Eventually, I walked away and wept.

A few hours later, I’d picked up lunch for the family. By that point, I’d stopped being able to taste my food and only felt the slightest bit of satisfaction if I ate something full of fat or salt or sugar. Even then, I had difficulty swallowing. While the others took this opportunity to sit outside the room, I sat beside my father’s bed and took a bite of fried chicken. When I glanced at Dad, he signaled me with his eyes. It took some time, but I finally figured out that he wanted to taste my food. He hadn’t eaten in days and could barely tolerate sucking water from a sponged stick. I didn’t know if it was okay to give him a taste, but he clearly wanted it. I put a tiny morsel in his mouth. I watched him as he tried to move his tongue, to chew, to swallow. After two or three minutes of effort, the crumb fell from his lips onto the mountain of blankets, pulled to his chin to keep his body warm. I picked it up and asked if he wanted to try again. His eyes told me yes, so I placed it on his tongue, and he closed his mouth around it. Again, I watched as he seemed to will it to move, will himself to move. After a bit longer, he stopped trying. His eyes did not beg for another try. It was in that moment that I saw him letting go.

On the day he died, after his body had been transported to the funeral home, my mother, sister, brother and I went to say our goodbyes. Alone with his dead body, I put a hand on his chest, and shut my eyes. In the quiet of my mind, I saw him as the old man he’d become, and then as the young man I’d known so well, and then as the child he was long before I existed. I watched that little boy run toward something, his huge smile widening with every step. And there, I saw what he must have seen: his mother, my grandmother. Her thousand companions stood beside her and behind her, all of their arms, like hers, raised outward in a V, drawing my little boy father to them, into a hug: the kind that encompasses you, a parent’s hug, the kind that makes you feel whole.

Image: “Reach Out” by Michael Pardo, licensed under CC 2.0 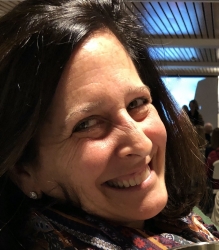 Sara Walpert Foster
Sara Walpert Foster is a freelance writer based in Marblehead, Massachusetts. Her personal essays explore how connection and communication impact who we are and how we operate in the world. Her essays have been published or are forthcoming in Little Old Lady Comedy, Mortar Magazine, and on Medium.

Sara Walpert Foster is a freelance writer based in Marblehead, Massachusetts. Her personal essays explore how connection and communication impact who we are and how we operate in the world. Her essays have been published or are forthcoming in Little Old Lady Comedy, Mortar Magazine, and on Medium.