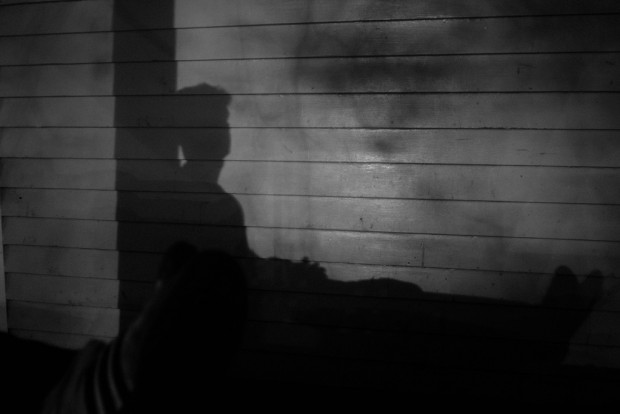 ONE OF THOSE CALLS

WHEN HE GOT good and drunk and the night wore on he liked to get on the phone and call up ex-girlfriends. He had a letter to write that evening though and so he sat down on the porch to write it before retiring to the phone. It was already dark outside at that point. Luckily he’d replaced the bulb in the porch light the week before and all it would take to get some light would be to walk inside and flip the switch. When he went in though he got sidetracked. He had to carry all his empty cans in and that led to getting another beer and that led him to the kitchen where the phone was screwed into the wall.

He looked at the ragged piece of paper on the counter with all the numbers.

By this point most of his ex-girlfriends had learned to just let the phone ring. Some got angry and told him never to call again. Christine was one of the last few who would put up with him and so that was who he called.

Hi there, he said. It’s Chappy.

Chappy, she said like she wasn’t sure she knew a Chappy. How goes it?

There’s a mighty fine reason for that, he said.

Because I’m drunk, he said.

Hey, he said. You busy, darling?

Nothing I can’t finish later, she said. What can I do for you?

Well Christine, he said, I was just sitting down to write a letter and I needed to ask somebody a question. A real serious question.

If this is one of those calls, she said, I can’t handle it right now. We didn’t work out and that’s the end of it. It’s been four long years. I can’t handle you crying and begging.

Okay meaning that’s what you called for, or okay, you understand?

Understand, he said. Loud and clear.

Good, she said. Okay. The question.

He said, The question is important. Real important.

And I want you to answer. The truth. Nothing but.

Hell, she said. What is it, Chappy?

Well, he said, here it is. Do you think I’m some kind of terrible sonuvabitch?

He said, You know me pretty good, Christine.

Chappy, she said, I told you I couldn’t handle one of these phone calls.

No, he said and got another beer. It’s not one of those calls. He looked in the refrigerator and opened a drawer and then shut it. It’s a question, he said. I need to know.

Where’s this coming from?

I don’t know, he said, looking at the pen and paper he’d planned on using to write the letter. They were sitting on the kitchen table next to a phonebook he’d left out in the rain. I’m writing a letter, he said, and I want to get it right.

A letter? Christine said. It’s not a letter to me, is it? Cause I can’t handle that either.

No ma’am, he said. Unless you want a letter.

No Chappy, she said. The last thing I want is a letter.

Okay. Well, I got a letter to write, he said, and I need to know if maybe I’m some kind of sonuvabitch. If maybe I just didn’t realize it.

Christine didn’t answer at first. The line went so silent he thought maybe she’d hung up. He even said Hello, you still there? and she said she was an was thinking of a way to say something.

Chappy, she said, finally, slowly, I think you’re a fine person, a good one sometimes, but you can act like a real sonuvabitch.

He rolled that around in his head and took a drink of his beer and picked the pen off the pad of paper and opened the soggy phonebook. While he thought out what she’d said he ran the tip of the pen across a random page and the page ripped open like a zipper.

That’s fair, he said into the phone.

Right then he remembered this one time, back when Christine and him were still together, when they’d lived together, and he’d come home from a fishing trip. She’d been sitting at the same kitchen table that was in his kitchen. She was smoking and drinking a gin and tonic. He told her all about the trip and how he’d been in the boat with his friend and a storm had turned up, an electrical storm, and how lightning kept hitting the water around them.

We almost died, he told her. The real deal. We rowed like mad men to get to the shore. And the waves were crashing down and we kept getting turned around and losing track of where we were going.

She’d looked at him and took a long, stiff drink of her gin and tonic. After she’d swallowed it down she said, You asshole. Just pick a direction next time and go.

Hey, he said to her through the phone, remember when I was caught in the storm in that boat?

Sure I do, she said. I gotta go though, Chappy. Things to do.

Sure thing, he said. Hey, thanks for picking up.

No problem, she said. He heard the clink of what he figured to be ice cubes floating in a sea of McCormick’s. And Chappy, she said, I should tell you. Kent proposed last month.

What’d you say? he asked.

Yes, she answered. I said yes.

Well, she said, whatever. I don’t care what you think. You don’t have the right to criticize considering you never asked.

Tell you what, he said. I’m gonna catch the next flight out your way and propose.

Okay, he said. Just be ready when you hear that doorbell.

Goodnight, she said. And good luck with that letter.

When she hung up he ran upstairs and packed a suitcase and a bag for his toothpaste and deodorant and shampoo. He’d already made up his mind to get on a plane and propose to Christine, but when he got downstairs with his bags he saw the pad of paper and pen sitting on the kitchen table.

He paused. Set the bags down and got another beer out of the fridge.

Outside he sat on his porch again. Already he knew what he wanted to say in the letter, what words and phrases he wanted to use, but he didn’t start right yet. He sat there in his chair and drank his beer and listened. For an hour or so it was quiet and it gave him some time to think. But then the night got darker as clouds took form. Lightning flashed in the distance and he thought, maybe, for a second, he heard thunder rolling in from behind.

This story is part of Sexton’s new collection The Hook and the Haymaker, from Split Lip Press. Its twenty-three stories, whether set in sparring rings, gas-station speakeasies, or the kitchens of the houses down the street, offer glimpses into an America that often goes unseen. Photo: “Porch Sit” by Bryce Anderson; licensed under CC BY 2.0

Jared Yates Sexton is an Assistant Professor of Creative Writing at Georgia Southern University and currently serves as Managing Editor of the literary magazine BULL. His work has been nominated for a pair of Pushcarts, The Million Writers Award, and was a finalist for The New American Fiction Prize. His first book, An End To All Things, is available from Atticus Books.

Jared Yates Sexton is an Assistant Professor of Creative Writing at Georgia Southern University and currently serves as Managing Editor of the literary magazine BULL. His work has been nominated for a pair of Pushcarts, The Million Writers Award, and was a finalist for The New American Fiction Prize. His first book, An End To All Things, is available from Atticus Books.