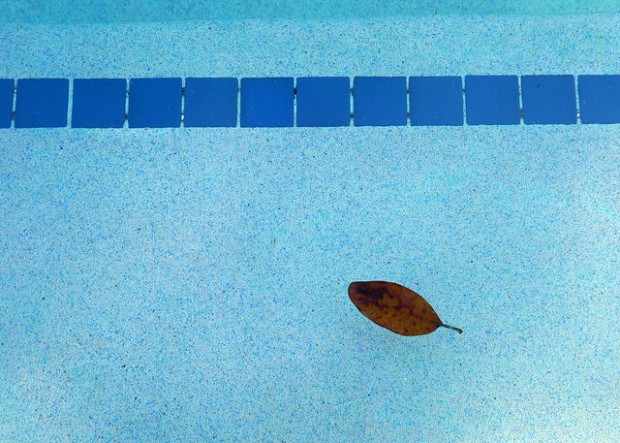 Autumn was near over – not that it mattered.

In the dull heat Lady let her feet swirl in the pool, sucking her red popsicle, waiting for something to happen. Her popped-out belly button slowly browned in the sunlight. The white tank-top, with brown and green marks of wear, yellowed as sweat dripped into the creased fabric, jammed between stomach and bones. Her belly had grown large and round but no one paid it much mind or care. These things happened in their town. After all, she was very beautiful – so judged the old ladies – and a girl can only turn down so many offers. The older women floated like flies from one dung-heap of story to another, digesting them into rumors. As they told it, Lady had chosen the right offer: a boy off to play the best college football in the country. And not too bad to look at either.

He wandered over to sit beside her, just his normal saunter, hips rhythmic and steady, never a falter from his large feet. His broad hand spread across her belly, absorbing some of the heat. His legs drifted beside her splashing feet, the water perfectly outlining the circle of his upper calf. His hand slid to her inner thigh. It gave a squeeze. He flopped backwards onto the grass.

“The old man ain’t here, is he?” His voice reached from behind her back.

“Nah. Florida.” She stared across the pool. Sweat slid out from under her hair, trickled down her back.

“How do you always know where people are?”

“Ain’t so hard to figure out.”

His palm landed on her solid back and rested there. She tilted her head up towards the sky. The sun glinted off the oversized, round frames of her sunglasses. She held the moment – worthy of fashion advertisements – in her mind. Weren’t they glamorous?

He lay still another moment then stood and stripped and dove smoothly into the water. He floated on his back a while, his penis adrift as if separate from his body. Slowly, soundlessly, his shadow traveled each inch of pool bottom. She watched his eyes scrunch together against the sun, as if he could never squeeze them tight enough. Then suddenly, he just relaxed everything, eyelids and all, embracing the caress of damaging beams.

Time passed. She sat with her head tilted toward the sun, still as a praying mantis. He hoisted himself from the pool, splashing water. She felt his wet chest against hers and lay down beneath him. Her index finger wiped away droplets fallen from his brow upon her cheek. His palm dragged across her hair, friction tugging slightly.

“You know,” he said, face placid, “you’re still so beautiful.”

He looked a moment more, then rolled onto his back into the grass. The ants hummed sweetly.

Lady closed her eyes against the sun. She rubbed her fingers across her shirt, then extended those fingers between his. So they lay beneath the cancerous caress of the sun, holding hands.

They hadn’t heard Skelt approach. Lady didn’t care for many of his friends, but Skelt she tolerated, almost liked.

“No,” he responded, unabashed by his nakedness.

“Why not you?” Skelt asked her.

“Don’t make much sense.” Skelt sat down beside his naked friend. “Heard you got that football scholarship.”

The flies were always buzzing.

“Guess so? My mama ain’t stopped talking about it.”

“Aw shit man, no one likes it here. I mean, what the fuck is here? What the fuck are we supposed to do in this cow-town?”

“You want to raise cows for the rest of your life?”

“There are worse things.”

“You ungrateful son of a bitch. You can say that because you’ve got options. Fucking options.”

“Quit fussing, Skelt,” said Lady. “You know you’re smart. We all know what you got on your SAT’s. You’ll have options.”

“But a scholarship? How the fuck am I gonna get that?”

Skelt did as he was told. He stared across the pool at the rotting wooden fence, arms wrapped around his knees.

“You do sure spend a lot of time with him,” said the father.

“Yeah. Still kind of funny,” he said. He turned to Skelt. “Tank coming?”

“Yeah. Just getting a thirty.”

“Fuck this heat,” Skelt sputtered. She heard the rustle of grass and untrapped insects as Skelt stood up, stripped and splashed into the pool. Small drops of water sprinkled the two lovers.

Lady smelled Tank before she saw him. He dropped his thirty of Pabst Blue Ribbon at her feet, crushing the grass along with who knew how many innocent bugs.

“Put the cans in the pool,” Skelt called.

“Shit!” said Skelt, dodging the flying cans. “The fuck are you doing Tank? You’re gonna hit me in the head.”

The father squeezed her hand.

“Gonna take a leak in the old man’s bathroom.”

She watched him closely as he strode off, wishing him back.

“Come swimming with me and Skelt,” Tank called to her.

Tank took off his shirt. Lady closed her eyes.

Something damp and heavy landed on her face. She was suffocating. The air was foul and hot. She whipped Tank’s shirt from her face and threw it away.

“So uptight today, babe.” His toes nudged her shoulder.

He dove into the pool. The crack and gasp of a beer, finally allowed to breathe, echoed across the yard.

He snapped them open, sipped from one, and placed the other beside her.

“Good for you though.”

Thirty packs went quickly in their group. Crinkled aluminum littered the lawn around their limp, outstretched bodies. They were courteous enough to keep the last drops of beer out of the old man’s water. But piss ran freely.

“When you two get married,” Skelt said, shaking off his dick, “I want to be the ring bearer.”

“We’re not getting married,” she said, eyes on the yellow-brown sky.

“She’s coming to school with me though,” the father said.

“Parents want him to be a good Daddy,” said Lady.

“What’s that supposed to mean?” said the father.

A bee hummed around the sweet aroma of her hair, gently playing in the soft breeze.

“I want another thirty,” Skelt said.

“I’ll come with you,” he said, propping up, away from her.

They rose and trudged off, leaving her with Tank.

Tank shifted so they were hip and hip. He rubbed his hand across her upper thigh, sliding it inwards. She pictured millipedes scuttling.

“Come with me to Virginia,” he murmured.

“What about what I want?”

“Why do you toy with me?” Tank rolled on top of her.

“I should have told him you were mine.”

“Fucking once or twice doesn’t make me yours.”

“It was more than that.”

“I made a mistake,” said Tank.

“No such thing,” said Lady.

A bee buzzed in her ear.

“Everything happens for a reason.”

The buzzing stopped. Tank recoiled with a yelp and curse. Flopping onto his back he grasped his right forearm and moaned.

“For fuck’s sake this hurts. Aren’t you going to do anything? Jesus Christ.”

“Go inside. First aid kit beneath the kitchen sink.”

“Don’t you have to suck out the stinger?” He moaned.

Tank had been inside for twenty minutes when Skelt came back with the father. They laughed when she explained where he’d gone.

“We ran into Stems. She’s coming later. Getting her brother’s stock.”

She smiled gently, reached her hand up for the father’s. He pressed his fingertips around hers.

Skelt freed himself of his sweat-soaked shirt and reentered the pool.

“Throw me some!” he called.

Skelt splashed around trying to catch beers out of the air. A cricket began its song.

Stems came into the yard, pulling herself over the rotted fence. She lay down behind Lady, who used her flat stomach as a pillow.

“Swollen,” said Skelt. “It’s all the praise you get about your ‘glow.’”

“I hate those comments. I’ve always been tan.”

“It’s not the same,” the father murmured.

“When’re you due again?” said Stems.

“The days are getting shorter. I don’t want the baby to be born in the dark,” said Lady.

“Yeah, something smart,” said the father. “Don’t want him making our mistakes.”

“He wasn’t part of the game plan.”

“Of course he is. Already causin’ trouble, and he ain’t even born yet.” The father smirked.

“Trouble yes, but not a mistake,” she said. “Some things are just done. And some aren’t.”

The baby was the result of a moment stolen for just each other. She’d wanted to feel him. He wanted to know her. The countless moments of which they felt robbed by that barrier between had weakened their resolve until it broke.

They became another dung heap for the old women to buzz around.

“Shit, my skin is fucked up,” Skelt said, splashing out of the pool.

“Stop getting me wet,” said Stems.

“Stems, you got the green?”

“Whatever. You didn’t say hi either.”

“Go get Tank and we can light up.”

“Think the old man’s got anything hard to drink?”

“Don’t take his alcohol you piece of shit,” said Lady.

Crickets began to chirp as the sky turned purple. Lady’s eyes drifted across the clouds. One right above her looked like a butterfly. Its right side got pulled by the wind, slowly stretching it apart, until poof! It was something totally different, a deformed, sideways heart perhaps. She wondered: if caterpillars turned to butterflies, what did butterflies turn into? The dust on other butterflies’ wings?

“You know what my mom used to tell me when I was little?”

“She said that I’m a caterpillar who just needed to build her cocoon.”

“Yeah.” She ran a hand atop the soft skin of her stomach. He was so still inside.

“You might have a baby in a couple days. Crazy.”

“Yeah. That one can’t stop talking about it,” she said, tilting her head towards the house.

“I mean, he holds your belly, his baby, every day. It’s weird for him too.”

“Can’t believe you kept this one.”

“I always wondered, why didn’t you keep the other one?”

The boys exited the house. Tank walked in front, brandishing a bottle of whisky. He winked in their direction. She rolled over onto her side, away from the line of men, head still coddled by Stems’ stomach.

“It wasn’t the right baby,” she muttered.

The sun slid down past the edge of the horizon. To the sound of crickets crying, five pairs of eyes fell shut.

Julie Monrad
Julie Monrad is a graduating senior from Harvard College. When avoiding schoolwork, she reads, writes, cooks at home and in restaurants, travels, hikes, plays squash, and volunteers for an eating disorder hotline.

Julie Monrad is a graduating senior from Harvard College. When avoiding schoolwork, she reads, writes, cooks at home and in restaurants, travels, hikes, plays squash, and volunteers for an eating disorder hotline.