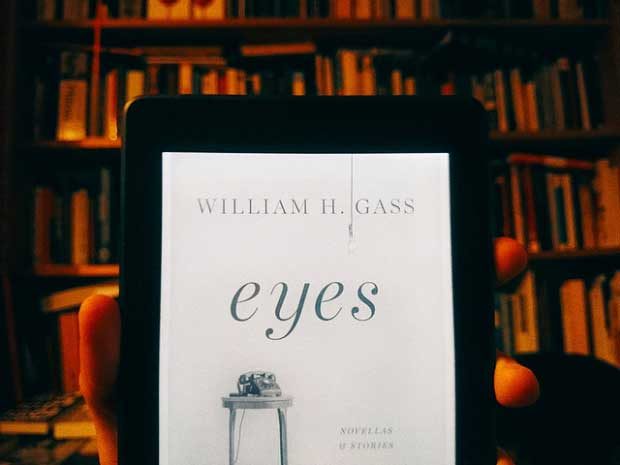 William Gass is a master of the English language. His prose is smooth and muscular: at once honey dripping off a hot tin roof, and a hammer encased in velvet. His greatest achievement in Eyes: Novellas and Stories is in the language. That said, his plots–vignettes may be the better word–are surreal and inventive. He might drop us into the scene of a desperate photographic print merchant and his even more desperate assistant in a Prague print shop, or narrate a piece in the voice of the piano used in the 1942 film Casablanca.

All throughout, the real hero of the stories is form. This is Gass’ co-pilot, his raison d’être, his methodology, as well as his objective. The journey in favor of the destination. In Finding a Form (1996), Gass makes clear that “My loyalty is to my text … and if I alter any reader’s consciousness, it will be because I have constructed a consciousness of which others may wish to become aware, or even, for a short time, share. The reader’s freedom is a holy thing.”

Gass, a professor emeritus of philosophy at Washington University of St. Louis, is practiced at probing the consciousness of both his readers and the subjects of his writing. Constructing realities and wrapping them, not unlike a gift, in verbal bows of gilt, is his trade. As one of the standard-bearers of the so-called “postmodernist” movement, Gass demands a great deal from the reader. No potboilers or otherwise pulpy romps; rather, considered, layered characters you experience almost the way you do gear-shifts in a car, an altered texture of rumbling on your way to whatever destination Gass has in mind to take you.

It is unsurprising, then, that David Foster Wallace, author of two of the cornerstones of postmodernism, Infinite Jest (1996) and the posthumously published The Pale King (2011) thoughtfully embraced what he believed to be a sorely overlooked and “direly underappreciated” work by Gass—his literary debut Omensetter’s Luck (1966). And Adam Fleming Petty, writing for Electric Literature in 2015, praised Gass’ interpretation of small-town Indiana in his story, “In the Heart of the Heart of the Country,” for the powerful descriptive lock Gass’ narrator has on the residents of “B”; the narrator is a “magnet” and the idiosyncratic and surprisingly deep residents “iron filings” waiting to be snapped into definition, all of them bound together.

While this story abounds in staccato phrases mimicking movements, sounds, actions and reactions, other stories achieve a charming simplicity. “In Camera” describes a photography print shop in a nondescript city as defended by steel shutters “reluctant to alter their position.” Mr. Gab, the proprietor of the shop, is harboring an apocalyptic secret for which his “stupid assistant,” “Mr. Stu,” (Igor to Gab’s Frankenstein), suffers the most profound torments. The beauty and rarity of the photographs in the shop compose the sweet frosting on a narrative cake that has a concealed file baked into it; it becomes apparent that Mr. Gab has been acquiring and selling stolen property. You can imagine a dusty old antiquarian shop, straight out of Bleak House, with merchants in fingerless gloves and unruly coifs talking with customers in hushed tones.

In “Charity,” a successful executive named Hardy is obsessed with the cynical schemes and perceived duplicities of philanthropy. For instance, he reflects, “… most of the money these charities collected went to the administrators of the business. To buy little red soldier suits and a tambourine, or to dress deadbeats up as Santas.” Beautifully-written passages about uncomfortable situations abound, such as when Hardy recounts the exploits of gypsy children in Rome and Naples. Gass manages Hardy’s exasperation through alliteration: “… thin fingered they are, pale-faced though swarthy, greedy and grinning, inevitably skinny and in clothes patched from here to there, but dancy and darty, shifty-eyed and slick.”

The child narrator of “The Toy Chest” rages in an alliterative way against his parents in asserting how much more quickly he can assemble a puzzle: “After I have been dumped on by dear ole dad, and there is a mildly broken spring to my walk, I spit on my childhood rendition of his face. Together they paint a pretty picture … the spill of spit … a pretty picture here … the swill of spit … the smear of spit … fragile as fragile glass … a pretty picture.”

Another powerful device Gass employs is to draw out utterly absorbing confessionals from non-human characters. Gass is a master of the power of empathy in ink. Even the book title, Eyes, suggests powers of observation not limited to animate beings.

“Don’t Even Try, Sam,” an interview with the Casablanca piano, reveals more about the cast of characters surrounding the ivory-keyed instrument: “You know, dear, if you really want to play me, keep the pressure on evenly. It is never necessary to hammer. I take a hint better than a holler …” You can almost imagine a Hoagy Carmichael-ish character with rakishly-cocked panama hat gently tossing out “aw shucks” observations in an easy Indiana drawl. Or, perhaps, a mildly-intoxicated Susan Alexander, highball at the ready, dishing to a reporter about her late husband Charles Foster Kane. “I know why you want to talk to me …” the piano asserts, “It’s because everybody else is dead. Stars go out. Directors die. Companies fold. But some of the props get preserved.”

With “Soliloquy for a Chair” Gass pumps life into a folding barbershop chair which later bears witness to the shop’s bombing. The chair’s verbal perambulations through life in the shop are guided through metaphor:

“We die through use—we do—buttons into buttonholes—occasionally there’s a trauma, but mostly it is the quiet wear of unnoticed routines—life’s a chair’s hinge—our workday seats are eaten by squirm and heat. But we also die of inaction and enforced rest, when rust’s slow debilitations pick at what we are and what sustains us with more repetition and determination than the woodworm.”

Gass’ lilting prose is as pleasant to read as it is evocative and wrenching—as if you were watching a car wreck in slow motion. You are repulsed, yet fascinated. That’s the terrible swift sword of elegant wordcraft.

In his book immediately preceding Eyes, the literary memoir Life Sentences: Literary Judgments and Accounts, Gass, whose own role model was Gertrude Stein, professes the belief that the three greatest masters of English prose were Thomas Hobbes, Jeremy Taylor and Sir Thomas Browne, and that it is among their sentences that the miracles of literature can be found—that is, in the manner of Larzarus, they can “make a sentence or a line of verse rise from the dead and walk again, run for a record, and even dance as dancers do when blessed …” As for his own role in this literary procession, Gass concludes by suggesting that it is from their lofty perch and from their eminence that “they urge even us, with our lesser talents, to make the climb.”

Christopher Hartman is a 1985 graduate of Hartwick College. He is the author of one book, Advance Man: The Life and Times of Harry Hoagland; editor of the novels Sons of Granada, by Carl Jeronimo, and The Last Columnist, by Tom Morgan, as well as several other books. He has also contributed numerous book reviews and features to the Christian Science Monitor, Upstate Diary, and other publications. He presented at the 2006 Business History Conference held at the University of Toronto’s Munk Centre, has been an event producer at several Boston Book Festivals, and served for five years as Vice President of Bookbuilders of Boston.