Was it your farting woke me? The next sound I hear is such a percussive, protracted arse bleat, and the stink of it hangs so heavy and sour over the bed, I decide you probably have trumpeted me awake. Blow, Gabriel, blow! But it’s a grim thought; I’m in no mood even for my own humor. Of course, you’ve thrown all the covers over me as well, so that you might fart freely and with full abandon into the already stale midnight air of the bedroom, so that I’m drenched in sweat, utterly tangled in a heavy twist of sheets and quilt. It may actually have been this that woke me first. Or some combination of these assaults on my senses, my sense of order. I sit up, nostrils shriveling, nerves aquiver with a still mild indignation.

I set myself to refolding and arranging, turning the bedclothes down until just our feet are covered, pulling the cool sheet back up over both our bodies. These methodical movements calm me. The fluorescent digits of the clock radio read one-thirteen a.m. I’ve been asleep less than an hour. I stretch out on my left side with my back to you and close my eyes, trying to find my way again into dreams.

You thrust the bedding off yourself with a violent kick, shoving the bulky mess onto my side of the bed, pinning it there with the full dead weight of your leg. You let fly another outrageous brrraaap.

“Pig. You disgusting pig,” I mutter. The obvious animal. Poor things, I know they don’t deserve the comparison. But I’m so tired, at a loss for more precise words. I fling myself into action again, whipping things back into place, into an approximation of my previous arrangement. You startle, somewhere down there in your own peaceful dreamland.

“Huh?” you sigh. “Huh?” That’s it – your response verbatim. You’re asleep, after all. Yet somehow, you manage to hook your foot around the edge of the covers. I pull them away: “Stop it, just stop it,” I hiss. I restore them to their recent orderliness. I lie down, close my eyes, only to realize that I’m not merely awake, having been awakened. I am absolutely, stark wide-awake. I’m going to have trouble now; I’m not going to be able to just drift back into sleep.

And you’ve begun to snore. Not, admittedly, the stentorian snoring of which you’re capable when sprawled out on your back. No, these are the stupid little puttputt sounds you sometimes make, mouth breathing in a sideways position. I realize with horror that I can actually transcribe this new refrain, its pattern subtle but certain: Poopah (ph ph)…poopah (ph ph). This isn’t all. Every so often, you stop the popping just long enough to scratch some part of your body. Compulsive, noisy. It’s only your own hairy chest, belly, balls. Yet it’s as unspeakable as fingernails screeched across a blackboard.

I turn toward you, glaring, half-hoping a baleful look will be enough to wake you, though I’m not certain what I would say. Even in the midst of my rising outrage, I have a dim sense of overreacting, of being irrationally wrought up. I am watching myself watch you, and it is not a pretty sight. I’m reminded of the macabre Japanese short story I’ve just read, about a woman who has ceased to sleep, and the ways in which her view of her husband (who of course goes on sleeping and waking and living his normal life) becomes more and more grotesque, unto real repulsion and loathing, although she’s always assured herself theirs is a happy marriage.

Another ferocious fart. This prodigious windy production reeks of a whole day’s badly digested bad food. (You ate no meals at home today, you won’t mind my pointing out, not even taking time for the usual toaster oven waffles at breakfast this morning).

I give you a good shove with my knee. You moan, roll onto your back, legs dragging at the bedding, which falls with a soft thud to the floor; your mouth falls open, and you begin to snore in earnest. Your chest heaves; your sinuses resonate. I leap out of bed, haul the bedclothes back up onto the foot of the mattress, then leave them in disarray and retreat to the bathroom, slamming the door after me. I don’t even turn on the light, I just sit down on the lidded toilet seat, clenching my fists, cursing you with what sound like powerful curses, but are too conventional to do any real good. You fucking, farting asshole; you snoring shit; I wish I could fart right in your face; I could strangle you in your sleep, you animal….

I genuinely believe I could throttle you to death. I could. Yet here I remain, sitting alone on the toilet in our little bathroom with the door shut between us, rather than shaking or shouting you awake to tell you exactly how wretched your flatulence and flinging and snoring and ass scratching make me feel.

When I do finally venture out, all is calm and still in the bedroom. The whiff of your night work remains in the air, but it isn’t gut wrenching, galvanizing. And the room is silent. I stop at the foot of the bed, seize two corners of the bedding, and struggle alone one more time to smooth and straighten everything across this double mattress we’ve shared for sixteen years. I slide between the sheets, on my back with my eyes closed, arms at my sides. Like a corpse in a coffin, or maybe like an anxious new bride – something, anyway, other than a longtime lover and life companion.

How much like an old dog you are. Lying there completely oblivious, your body doing whatever it wants to, unconcerned with anything but your own comfort. If you really were that old dog, my own old dog, I would just hold my nose against your stink, maybe even laugh a little. I wouldn’t mind your growling in your sleep, your fitful scratching; I might even be comforted by these things, because they would mean you were here to protect me and love me and keep me company. I would reach out my hand from time to time to pet you, rubbing my palm the wrong way along your wiry hair; you would groan, down to the depths of your doggy sleep, pure pleasure at my touch. I wonder why I should feel so much more tenderness toward the disgusting old dog I’ve never owned and will probably never own, than toward a man with whom I have lived for so long.

I drift for a few hours. When I wake, the clock reads four fifteen, and our youngest is shifting and sighing in the next room. The ensuing silence reassures me she is still asleep. I’m ridiculously relieved, and smile at the thought of the catchphrase with which she prefaces nearly everything she says. “I want to tell you something.” It’s what she would have said if she had padded in here to stand over me, waiting for my eyes to snap open.

I want to tell you something. It doesn’t necessarily signify that she has a whole story to tell; this is how she begins whatever it is she’s bent on telling. It expresses an intention, announces that she will now say something she considers significant, worth saying. Above all, it means to get your attention.

Without warning, you roll toward me with a mulish kick at the covers, a full throated moan, a noiselessly escaping exhalation from beneath. SBD’s, silent but deadly, kids used to call them in school. I pull myself up on my elbows, look into your face. It is still entirely asleep. It doesn’t know, doesn’t see or hear. Your forehead glistens with perspiration. Maybe a bad dream. Maybe you’re not feeling well. Or maybe it’s nothing at all.

I pass my palm lightly across the sweating expanse of skin. Your eyes flicker open for an  instant, fix on mine; you smile. “Mmm,” you say dreamily. Pure pleasure at my touch. I smile too. Your eyes close again; you turn away. I turn so that we’re back to back as we were at the beginning, almost, but not quite touching one another. Then, I draw the sheet up over my hip, tuck a corner beneath my armpit, taut over one breast, and close my eyes, waiting for the sounds of a radio orchestra to wake me next. 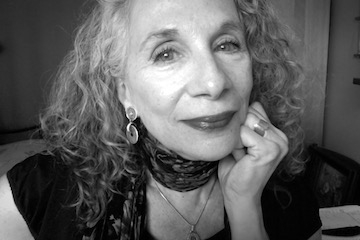 Susan Volchok
Susan Volchok, a New York writer, is a frequent contributor to Pangyrus and has published widely in journals and anthologies ranging from the Virginia Quarterly Review and the Kenyon Review to Best American Erotica, in mainstream magazines and newspapers including the New York Times, and online @ n+1, the common, the literary bohemian, and mr. beller's neighborhood, among other sites. She has spent the better part of life on the Upper West Side of Manhattan, perfectly situated between Central Park and Riverside Park on the Hudson.