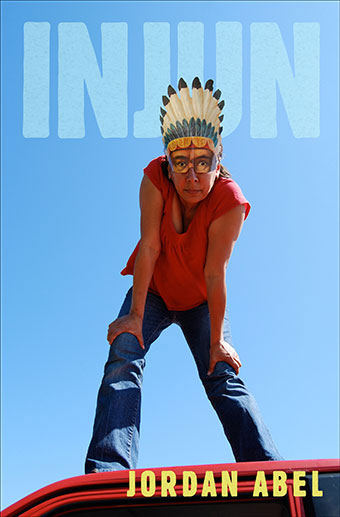 The atrocities inflicted on the indigenous peoples of the Americas through the centuries are well-documented in both literary and expository accounts. From the newly-arrived European settlers’ purloining of native lands in New England and the mid-Atlantic colonies, to the horrors of the Trail of Tears in the early 19th century, to the removal of entire tribes from their ancestral lands to so-called “reservations”—the historical record shows an accumulation of personal indignities and racial discrimination rising toward war and ultimately genocide.

Jordan Abel, a poet of First Nation Nisga’a tribal descent who is currently a writer-in-residence at Simon Fraser University in Vancouver, Canada, has produced a monumental poetic work in Injun. It’s a slender, yet compelling and impactful volume that graphically undertakes to expose the hateful mythology imposed on Native American peoples beginning with North America’s European colonial history.

The method Abel used in compiling the book is at once both abstract and concrete in its expression. He first created a source text taken from 91 public domain western novels, and ferretted out 509 instances of the Anglo-American corruption of “Indian”—”injun”⎯which amounted to 26 full print pages of text. He then cut up the pages in random clusters⎯some combinations intentional, some not⎯and placed the resulting segments into what he felt were suitable, if arbitrary, arrangements.

The compendium of sources at the rear of the book reveals a who’s who of authors of the western literary canon: Zane Grey, Bret Harte, Washington Irving, Owen Wister, and even Mark Twain, whose quote, “It is better to take what does not belong to you than to let it lie around neglected,” serves as the book’s ominous epigraph. This not an accident; it is intended to demonstrate that the great novels of the American West were in fact perpetrating and perpetuating the subjugation of the Native American population—showing them variously as ignorant, lazy, dirty, susceptible to drunkenness, and more generally, subhuman.

Abel’s graphics in Injun are masterfully crafted: the tapestry he unravels as the book’s initial verses rapidly fray⎯from tightly structured stanzas to erupting textual explosions⎯resembles a poetic interpretation of Maurice Ravel’s Bolero: moving gradually, yet inexorably, toward a cathartic crescendo. At peak intensity, Abel scrambles the racially disdainful passages beyond recognition. It is reminiscent of the equally innovative prose of Russell Hoban’s Riddley Walker, in which the characters speak a tongue that has been cobbled together from the remnants of post-nuclear armageddon Britain; only here, Abel’s objective is to cast the vile disparagements of Native Peoples into their own oblivion.

In the last two parts of the book, Abel demonstrates both how the repetitive inclusion and exclusion of racist terminology in literature can have equally startling impact. By highlighting liberally invoked terms such as “injun,” “warpath,” “squaw,” “redskin,” “bloody,” and “scalped” on successive pages within a dozen or so random lines of prose, he assembles what amounts to a caricature of Native Peoples crafted by some of the most widely-read and lauded authors of the western genre.

Injun‘s appendix displays entire prose passages featuring blank spaces wherever the word “injun” would have appeared; the resulting “checker board” effect from these omissions clearly demonstrates just how seemingly reflexive the use of the term was in western frontier history and its concomitant literary tradition.

It cannot be denied that life for the earliest European-American settlers was exceedingly difficult and that both understanding and appreciating Native cultures was of lower priority than their own survival in a new land. Our most storied accounts of the American West portrayed the complexities of this cultural discordance in often endearing and humorous ways; but the collateral damage exacted on the lives and character of the Native population are equally undeniable. Abel has dramatically explicated this tortured relationship with Injun, which is the book’s greatest contribution.