When I was 13 and my parents were doing okay, we had a house with pillars. It was just a split-level ranch, but the pillars and our long sloping front lawn with apple trees created the impression of stateliness. Especially in the eyes of the gymnastics boys- city boys from Winthrop who dropped me off after a gymnastics meet one late afternoon. (They were the boys’ team matched with our girls’ team; our coaches were friends.) Oh, fancy. Wow, they said. Rich girl. I scoffed- proud, misunderstood, ashamed. I liked one of the boys. I said nothing. Just got out and ran as fast as I could around to the back door.

When my parents decided we could no longer afford that pillared house in the Massachusetts suburbs, we moved up to New Hampshire, just over the border to the town that’s home to Canobie Lake Amusement Park. Our house was in a new development, a 5-acre rectangle carved out of the woods called Owl’s Nest. One of the builders of its Garrisons and Capes, a man who smelled of fresh mulch and plaster, told people he’d spotted an owl when they were clearing trees. Just the one. When owls venture out alone, they’re sometimes attacked by smaller birds, who are afraid of them. Despite the torment, though, the owls almost never get badly hurt.

I tried to like the new house, but I hated the cold, dark New Hampshire roads where I waited for the school bus in the mornings- my long, wet hair frozen into ropes- to take me to the regional high school miles away. Those first weeks at school, I cultivated a niche- new girl, mysterious and unknowable- and kept it up indefinitely. Floating between friend groups and ideas of myself seemed like an effective, if cowardly, strategy.

When summer came, I got a job spinning cotton candy at Canobie Lake Park. I worked in a sticky trance inside a hot closet-sized kiosk across from the kiddie boats. As a child, I’d loved everything about Canobie. The place had intoxicated me. We only went two or three times a summer, but I felt its narcotic pull every sunny day from May through September. At the end of each rare visit, after a day of rides and fried foods and sweets, I prayed that I would live there one day. Looking out our station wagon’s back window, I would contract my diaphragm, hold my breath, and send a signal from my core up over the top of the ferris wheel to God. I’d have given anything. When we really did move to New Hampshire, I cursed this younger self for wishing it all into existence.

On breaks from the cotton candy hut, I walked around the park. I watched little kids pretend-pilot power boats in suspended circles above gray water. I wandered past the vintage merry-go-round and its re-glazed ponies with too-red lips. I stepped over trash: cigarette butts, discarded strings from candy necklaces, crumpled tickets, the occasional condom. I heard scraping wheels and screams, and steered clear of handsy boys and drunk down-and-outers. Pigeons scattered in front of me in fits and flights of fresh panic. I left my shift every night with a thin film of cotton candy covering my hair like a pink helmet, and tried to slip past my bosses after punching out. They were all about 22 and seemed to be heavy pot smokers. I recognized a few as the older brothers of new high school friends.

One night years later, when I was about their age living in a drafty duplex in Boston after college, I went to a modern art thing down at the Cyclorama gallery with a new artist friend. Once inside, we stopped in front of a series of paintings on the wall- huge white canvases with giant concentric yellow circles. I shook my head and said too-easy things. This is bullshit. Just circles? I don’t get it. I could do that. My friend laughed. Yeah, but you didn’t.

My father got fired from his job around that time. Probably something to do with his drinking. (My mother recently told me about the time a pint of vodka slid out from under his car seat and hit her in the ankle when she’d borrowed his car.) None of us- my siblings or my mother or me- confronted him about his drinking then. We all had our reasons. Mine were: he had a temper, he was proud, I loved him, and I thought I had more time. When he got hired back at half his former salary, he wore cardigans instead of suit jackets to work from then on. The cardigan rebellion. He spent most of his nights after that drinking Miller Lite and carving duck decoys- the folk-art kind for displaying on mantels, not the kind you use to fool real ducks to their death.

My parents moved from their Owl’s Nest Garrison into a much smaller house a few towns over, and then my father got sick. My mother kept working as an overnight nurse on maternity, and got a riding mower for their small lawn. When I came up from Boston to visit, she and I would sometimes drive by one of our old houses and park outside, a few cars down. We’d sit there looking at the house, then she’d say “Okay?” and we’d drive on to the next house, or to her current one with the riding mower and my dying dad and his decoys.

I began dating a well-known actor. He lived on a big spread in upstate New York. When he was courting me, he said he wanted to meet my family and see where I “came from.” I had no intention of taking him to that house, which was fine, because he had no intention of ever going there. I thought years later about how lonely he’d seemed, just one man on that big spread, making promises.

Funny, because shortly after that, I moved in and started housesitting for a wealthy friend in a mansion with a full-time gardener who’d worked there since my friend was a small girl. It was such a huge house, and I felt ridiculous staying there. I often woke up and didn’t know where I was. And even living for free, I went into debt, having developed a habit of spending money- mostly on clothes and eating at restaurants- just to get out of the house. When a boyfriend wondered aloud over dinner one night why I always seemed poised to run, I pretended not to hear. The day I moved out, I was approaching my car in the driveway carrying a heavy box of cassettes when I saw a giant blue heron on the roof of my car just standing there, regal and still. The gardener and I watched it fly away in its prehistoric, slow motion way. “They’re monogamous, you know,” he said.

Years later, I started dating a man nine years younger than I who seemed steady and beautiful. It was a nice surprise- the whole thing. We had a baby, then married. Then another baby. In between babies, we bought a house- an 1885 farmhouse with a big yard. The family who lived there before us had raised six kids in that house, and they’d never lived anywhere else. I learned about nesting, and I nested. I started gardening.

When the kids were little, we visited a friend’s goat farm in Vermont. My toddler son fell into a cistern that was six feet deep, but it was dusk and it looked like the earth had swallowed him. We heard a splash, and I tried to go into the hole head first. My husband and his friend pulled me out by the legs and my husband jumped in. I heard my boy crying. My husband handed him up to me, his winter jacket and snow pants soaked through from the whey water at the bottom of the cistern.

The couple who lived on the farm a half-mile away came to check on us; they’d heard our screams and raced over. The scene of them pulling up the gravel driveway in their pickup truck made me think of an article I’d recently read about how dolphins and bats use echolocation to send signals to one another, sometimes over vast distances.

The woman in the couple was a volunteer EMT. She started examining my son, then looked up and noticed my daughter, who was four, running nervously in place up on the porch, clapping her little fists together. I ran over, scooped her up, and brought her to her brother. The woman calmed her down by having her listen through the stethoscope to the beating heart under my son’s wet shirt. See? Hear that? He’s okay. It struck me as the perfect thing to do.

I sat on our friends’ porch holding and rocking my son, who was bundled in my husband’s jacket and a wool blanket as we waited for his snowsuit to dry in the dryer. I’d never felt so many versions of desperate at the same time as I did on that porch holding his warm, rescued body. I buried my face in his damp blonde hair and thought about the sending out of signals- animal to animal, person to person. Signals of thanks. Signals of warning and fear. Signals of presence.

I imagined the pins of all my places on a map, and the threads connecting them. Flight patterns. I thought about my dead father and how in my dreams he’s always wearing a cardigan and jeans. I watched the stars come in, one by one. I thought about the yellow concentric circles on those giant canvases, and understood 20 years late that they were saying, quieter then louder, again and again: Are you there? Are you in there? I’m here. In here. 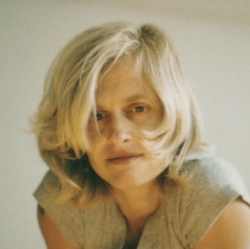 Karen Harris
Karen Harris, Ed.D., is a teacher, writer, musician, and researcher. She taught at Brookline High School's democratic School within a School, and at the Favorite Poem Project. Her writing and research interests include parenting, education, friendship, poetry, ADHD, and rock and roll. She fronted the critically-acclaimed Boston rock band, The Vivs, and lives in Cambridge with her husband and kids. www.karenharris.org.

Karen Harris, Ed.D., is a teacher, writer, musician, and researcher. She taught at Brookline High School's democratic School within a School, and at the Favorite Poem Project. Her writing and research interests include parenting, education, friendship, poetry, ADHD, and rock and roll. She fronted the critically-acclaimed Boston rock band, The Vivs, and lives in Cambridge with her husband and kids. www.karenharris.org.