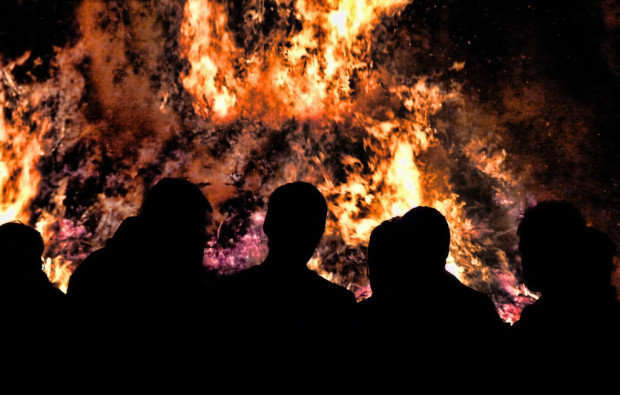 When the house next door to Denise’s rental caught fire, she stood outside with the other neighbors, huddled under the hood of her jacket as the rain beat down. She watched the acrid black smoke purl up from the roof as flames licked the siding and created a glowing frame around the windows on the second floor. Glass shattered, all the fragments shining as they fell away, and a stream of water gushed out in a powerful river, hitting the sidewalk and running into the street. Lightning hit it, she overheard someone say.

She realized the loud boom that had woken her from a deep sleep an hour or so before had been real. It had felt as if the walls had shook. Flashes of white light had bloomed out her window and heavy sheets of rain had drummed on the roof. Just a storm, she’d soothed herself. Yet there had been so much energy in the air, humming and conducting a kind of symphony, that her brain hadn’t been able to find a quiet space for sleep after that. The ringing sirens had not been notable at first, but had blended into the sound, like the punctuation of a kettle drum or twang of a cymbal. The swirling pattern of red lights on her wall had been real.

The firefighters she watched now, masked and towering in their layers of repellant, heavy coats and pants, were real.

“They’re out of town,” the woman next to Denise said.

“Don’t they have a cat?” Denise asked. She remembered seeing an orange tabby sunning itself in the window before.

The man standing next to the woman laced his arm into hers and shook his head.

“Maybe not anymore they don’t.”

No one spoke again; there was nothing left to say. There was only the responsibility to remain and bear witness.

Denise and the other neighbors stood outside for the better part of two hours, until all the fire had been extinguished and the house sat lonely and dark. Denise finally went back into her house and paced the floor as she waited for the coffee to brew. What would she save? Pictures, mementos, perhaps that small gold watch her grandfather had given her? The more she thought about it, the more she realized that she had nothing to save. She wondered if she should get a cat, despite her allergies. She could wear gloves to pet it.

The fire became a sort of touch point in her mind, an extension of those racing, persistent thoughts at night: Had she locked the front door? Checked under the bed? Turned off the oven? Left a candle burning? She never lit candles, though she had them in abundance. Her mother, every holiday and every birthday, sent her scented candles that smelled like pies, jack o’lanterns, apples, and the ocean. It was the kind of gift you could give to anybody.

Jennifer Marie Donahue was born in Virginia, but currently resides in Massachusetts. Her work has appeared at Corium Magazine, Necessary Fiction, Neon and elsewhere. She is currently hard at work on a novel-in-stories.