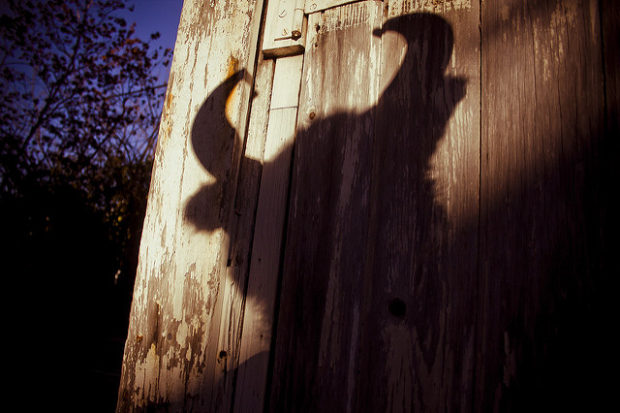 You sign a liability waver and pay your money–for the chance to walk down a hallway two feet wide and forty feet long, in darkness, alone. Part of it you have to crawl. Music plays: Peking opera filtered through ice cream truck.  Flashes come of things worse than you’d imagine on your own:  medieval gynecology, a toilet teeming with snakes.  You don’t know what’s next, but you do know it it’s probably hungry.

This haunted attraction, “Midsummer Nightmare,” was created by Josh Randall and Kris Thor (Vortex Theater Company in New York City), one of the thousands of dark entertainments that erupt at this time of year. Monsters emerge at Halloween just as the light leaves us and the first blast of winter cold shoots down from Canada. The presence of monsters—for millennia and as of this moment—means a change is coming.

It’s supposed to be good for us, this coming nose-to-nose with them. David Zald—with the Affective Neuroscience Laboratory at Vanderbilt—explains that we gain mastery of our emotions by having encounters that we know are only partially real. Trucking with Halloween pseudo-monsters is a way to exorcise the rage and terror that festers just below our skins. They help us rehearse for real fear.

Our monsters have always come from serious places. After the trauma of World War I, Americans went in droves to see the movies’ new horribles: Dracula (1931), Frankenstein (1931), and Freaks (1932). The Wolfman—Hitler’s totem animal was the wolf—was the WWII monster, mutants and aliens our post-atomic villains; vampires obsessed us during the AIDS epidemic, horrific man-monsters erupted after Viet Nam, and a spate of violent beasts after 9/11. Monsters are, psychologists say, our repressed “evil twins,” or our collective nightmares. To deal with the monstrosity in our lives, we make the monster real, externalize it, animate it, and kill it to rob it of power.

By the dim and yellow light of the moon…I beheld the wretch—the miserable monster whom I had created. He held up the curtain of the bed and his eyes, if eyes they may be called, were fixed on me. His jaws opened and he muttered some inarticulate sounds, while a grin wrinkled his cheeks.

But here’s where our current relationship with monsters takes a left turn. Rather than externalize and destroy, some of us emulate, want to be monsters, to get so far out of mainstream culture that no one can mistake us for being part of it. Lizardman (aka Erik Sprague), a body-based performance artist from Austin, has had green scales inked across his entire body. There are guys with subdermal spikes in their forearms, women who bifurcate their tongues. Stretch your earlobes, pierce your nipple, tattoo your face. Joining the fraternity of the monstrous becomes an ideological stand, a way of saying, “I’m not you, not that.” Burn the bridge, lock the door, don’t look back. You can guarantee you’ll never work on Capitol Hill if you tattoo OBEY on your knuckles. To avoid being co-opted by commerce, to outrun the media or any of the million rivulets of mainstream culture—to stay true to your revolution, to keep alternative lifestyle alternative—you have to transcend the artful exterior and sink down through the skin to the blood. Mark yourself—flay, pierce, rip, decorate (mutilation as creative diss-ing of normalcy, the ultimate parody of plastic surgery-obsessed America?). Slide right into the frames of those comic books and horror movies, inked or painted like those beloved monsters, into a reality that feels right.

So, then, the worst fears of parents and psychiatrists have come true: EC comics, Creature Features TV movies on Sunday afternoons, and all those weird imaginings did damage the psyches of young kids. It was those kids—little Stephen King, George Lucas, Tim Burton, and Steven Spielberg (who terrorized his sister Nancy by cutting off her doll’s head and serving it to her on a bed of lettuce)—who brought their love for the creepy into the art, film, music, and literature they produced as adults, which influenced the next generation, who grew up to create the latex masks, special effects, metal music, and gory props that kids today can’t get enough of. (And of course the bar’s been raised—blood-and-guts-wise—over the past decades. It takes a far more visceral monster to thrill a generation raised on “Hellraiser” than one growing up with, say, “Betty Boop’s Halloween Party.”) For anyone born after 1950, Halloween and monsters slid into our consciousness together. We fear them, we love them, and some of us want to be them. What does it say about us that this year’s monster is the creepy clown?

“I’m either tripping, or his daughter is a ghost. She has no reflection in the mirror. #TheHauntedElection,” tweeted @Mister_Seattle

Bloodlust for upending the world order is cresting. Milwaukee Country Sheriff David Clarke, Jr., tweeted that it was “Pitchforks and torches time” to deal with corrupt government and bogus media. “Monster vote” is what Republican strategists call the allegedly large number of Trump voters who live under the radar and will descend on the polls come November. “Donald Trump Goes Full Rage-Monster on Hillary and Bill Clinton,” reads the header on an October 9 Betsy Woodruff piece in thedailybeast.com. “Can the Monster Be Elected?“ asks Michael Tomasky, in the New York Review of Books. Just last week, a CNN reporter described Trump “spitting fire” at a campaign rally in Florida, and Trump himself talks repeatedly about “draining the swamp.” The monster, devouring, hungry—all mouth—is awake. We stand and watch, slack-jawed. We created this monster, but are repulsed when it lives.

Which is why Halloween comes just in time.  Holidays put us on the same page—a truce, a cease fire in the culture wars—and this one, our sugar-fueled, exhibitionist, fantasy holiday, opens up the possibility of finding our better angels. On this one night, we stand together in a shared flight of imagination, agreeing that babies are peapods and our pets are superheroes, that we welcome men in high heels and women with Mario Brothers mustaches, pre-teens who look a worldly 20 and dads dressed like Marshmallow Peeps. Yes, of course there will be plenty of nasty woman Hillary and devil Donald, because irony is and always has been a huge part of Halloween. (Sales of presidential election year masks usually predict the winner: Bill Clinton outsold George H.W. Bush, George W. beat Al Gore. But the world’s largest costumer, Rubie’s, says that this year there’s something else going on: Trump masks are flying out the door because people are buying them to make fun of and to support, and, for the first time, guys have to think about dressing up as a woman). At Halloween we can wrap our arms around the reality of the other 364 days and satirize, emulate, exorcize, and celebrate it. Levees break. Banks fail, jobs vanish, bombs explode. The joy of Halloween is not that it’s dark and we revel in that; it’s that Halloween can bring a bit of light and laughter into this darkness. Our onetime children’s holiday turned blood-and-guts carnival may just be the right antidote for a myriad of ailments, a delightful gimme for any number of alt-cultures normally banished to the fringe. In so many ways, Halloween keeps us together.

Which may be why we hold on so tightly to Halloween. No matter how much we try to stretch it, Halloween happens only when the light casts a certain length of shadow and the temperature slides. The night is dug into the year like a marker. Leading up to Halloween: creativity, anticipation, possibility. After Halloween: reality. The sheer G-force of accelerating time makes us cling to something organically cyclical, to hold tight to this one night of benevolent exhibitionism and group glee before the bitter dissension of November politics hits.

Bring on the horror movie monsters and mad scientists, serial killers, adult-size tootsie rolls, and yes, even sexy exorcists. Let’s fling open front doors and give candy to kids we don’t know, watch horror burlesque artists twirl prosthetic eyeball pasties and ride around with witch-striped socks hanging from the trunks of our cars. It feels good to align yourself with all the creatures that gather on this night; there’s a creativity and passion there. There’s joy in living by a code, no matter how offbeat or temporary, and in celebrating with strangers. On Halloween, the connections between us become visible, like a giant web that stretches from haunted maze to office park to biker’s club to your kids’ cafeteria, where on Halloween, the lunch ladies wear horns.

Photo “Wait a minute” by David Rabbit Wallace ; licensed under CC BY 2.0

Lesley Bannatyne is an author who writes on Halloween. This essay comes from research she conducted on her most recent book, Halloween Nation. Behind the Scenes of America’s Fright Night, which was a Bram Stoker Award finalist.
Read more of her work at iskullhalloween.com

Lesley Bannatyne is an author who writes on Halloween. This essay comes from research she conducted on her most recent book, Halloween Nation. Behind the Scenes of America’s Fright Night, which was a Bram Stoker Award finalist. Read more of her work at iskullhalloween.com