In the month of July, when both heat and humidity are at their peak in the holy city of Vrindavan in north India, thousands of devotees stream in to offer prayers to their Lord Krishna on a day that is among the most auspicious in the year. As devotional music blares through loudspeakers, a surge of bodies presses forward towards the temples that have been adorned for the special day. This place of the childhood leela (divine play) of Lord Krishna, a Hindu God who is considered to have taken human form to fight off evil, never lacks abundant festivity or throngs of visitors. But a few streets away, where the crowds and the chanting fade away, a row of lime-painted buildings, with freshly washed white cotton sarees strung neatly on a clothesline, offers a glimpse into the daily life of some of the city’s residents. Going about their chores are abandoned, widowed women, aged anywhere between 35 to 80 years, who have traveled thousands of miles to find this place of refuge.

In one of the dormitories here, sitting on the edge of her bed, is Geeta Bai. For 60 years Geeta Bai was entirely devoted to her family. She married at thirteen; her family was the only life she knew. Her husband was her Lord, whom she still addresses with deep reverence as her ‘swami’ (master). After her husband died some 15 years ago, she had hoped to be looked after by her two adult sons, whose birth she had prayed for. In the patriarchal Hindu tradition, it was expected that the sons would take care of her in her old age and perform her last rites when she died.

But her sons resented her dependence after her husband’s death. “I couldn’t take the fights anymore. So, I left,” she said, as she wiped her tears with a corner of her saree and hugged me tightly. Fifteen years ago, Geeta Bai left her village, traveling hundreds of miles, after hearing stories about a place where “widows like her could find shelter. “I’m hungry for love,” said the 80-year-old widow, casting her glance around the large dormitory, where at least thirty other women are sitting or lying in silence on their beds. Geeta Bai held my hand and let out sobs that shook her frail body. Her family has not visited or ever inquired about her since she left. The story of others is no different. Vrindavan continues to draw thousands of widows, who, within India’s patriarchal tradition, lose their sole means of survival and protection after their husbands’ death. When abandoned by their surviving family, many women, hearing about this place of shelter, head to Lord Krishna’s city, seeking refuge from a male God, who, in the Hindu tradition symbolizes divine love. 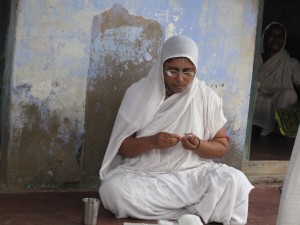 Bai and her roommates live side by side on beds arranged closely in two parallel rows. Their few belongings – some clothes, and a few prayer books – are stacked on a corner of their beds. The space under the bed is used for storing a small stove and some items for cooking. The air in the room is thick with an odd mixture of smells: old clothes, disinfectant, and the stench of urine. In many ways, it resembles the bleak wards in India’s public hospitals, except that most people in those hospitals would have a home to go back to.

A deep melancholic silence pervades the room. As a way to fill up their day, the caretakers of the home have handed these women slim notebooks, in which they repeatedly write the name of Lord Rama several times a day. As I enter, a few women are trying to write the God’s name. Some are chanting it. Most are simply lying on their beds. Chandrawati, who has been living there for the past 15 years, has occasionally visited her sons. “But I don’t like it there,” she says. Bankumari came about five years ago and has not heard from her family since then. Gauri Devi left her home about 20 years ago.

Among the throng of devotees in Vrindavan, the widows are easily recognized by their attire; their white cotton sarees are considered traditional dress for a Hindu woman following her husband’s death. As evening descends, these women start to fill up the many temples. The bhajans (holy songs) that they will sing for the next few hours in praise of the Lord will earn them a few cents’ worth of rice and lentils as the day’s meal. Those unable to find a place in a temple will beg for food or money from the thousands of devotees who throng the city at all times. As demand for shelter far outstrips the supply, not all who enter the city are fortunate enough to find a bed and shelter. 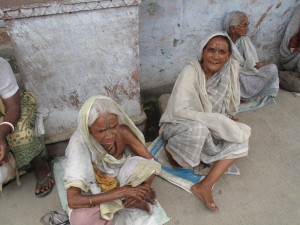 “I am here for Krishna’s love,” says Kamala Bai, who is without shelter and begging for food on a narrow street outside Radha Rani temple. Squatting alongside are many others in similar conditions of desperation. They are half covered with their sarees, their upper garments missing, showing visibly starved bodies. Lord Krishna and his consort, Radha, remain their only hope. “The Lord will look after me,” says Sharda Bai. In one hand she holds a metal pot, in which some passing devotees may toss a few coins. In the other, she holds a stick, used to scare away the hundreds of monkeys present in the city; unchecked, they will prey on the widows’ food. “Take off your glasses,” she urges me, while pointing at the monkeys. “If they don’t find food on you, they will take whatever else you have.” With no place in the widows’ homes, these women share the space on the streets, with these simians and others.

Despite India’s promising economic development, the condition of widows, who flock to the city, mostly from the eastern state of West Bengal, has not changed in the past several decades. In the absence of any formal social security systems, temples of Vrindavan have become the place of refuge for aging women, once they lose the sole means of their livelihood, which often are their husbands. This is thus the common thread in all life stories here. Each woman has a story to tell of maltreatment or abandonment by her surviving family. Almost all of them tell their stories with remarkable restraint as they choose not to complain. But the pain of abandonment surfaces in their words, tears or even their silence. 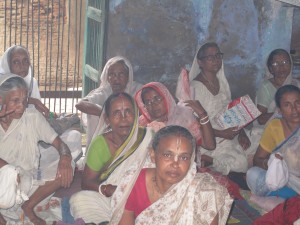 In this city of teeming devotees, the women are alone. With no family around them that would give them a purpose to live, the widows spend their living days waiting for their death. Bai keeps a portrait of Krishna by her side and prays to him to call her back to his abode soon. “There is nothing for me to look forward to. All my desires have ended,” she says with a sadness that does not speak of renunciation, often believed to be the reason for the women choosing to live in Vrindavan. Their last rites are performed by NGOs.

The dormitories that I visited are among the many that have come up in the city; some are run by NGOs and some by the state government. Despite the shelters, deprivation remains acute. Winnie Singh, who started an NGO, Maitri (Friendship) in 2008, says, while summing up the condition of widows: “I witnessed a near stampede, when we were distributing food, for just half a kilogram of grain. And most of the women were so emaciated, they could not even lift the grain.”

At times, the widows try to exchange the food they get for other necessities. “They were extremely malnourished, yet we noticed they were selling the grain to get a little money,” said Singh. To Singh, the condition of the widows speaks to the violence against women that has been getting some attention of late. “It is an extension of the same violence against women, that we see in India, but in a different form,” says Singh.

In India’s patriarchal society, women accused of stepping outside of tradition are often “punished” in various ways. Ironically, these widows have complied with every tradition known to them, yet they suffer severe poverty. According to Hindu theology, caring for one’s parents alone is said to result in accumulation of good karma, the fruits of which are to be enjoyed not only in this life, but in the many to come in the cycle of birth and rebirth. Thus a mother is traditionally given the highest place in a person’s life, and cared for after a father’s death. But here, in India’s sacred town, the presence of desperate “widows” in large numbers illustrates the necessity of programs towards economic empowerment of women that can address the needs of different generations as well.

We are proud to celebrate the fact that our editors are also working writers and members of the same communities we seek to publish.

Kalpana Jain
Contributing Editor at Pangyrus.com
Kalpana is a writer and researcher at Harvard Business School and student at the Divinity School pursuing a Master in Theological Studies. Kalpana is also an alumna of Harvard Kennedy School. She has been a senior journalist whose reporting played a significant role in elevating public health as an important topic of news coverage in India. She has been been a health editor with the largest circulating English Daily, The Times of India.