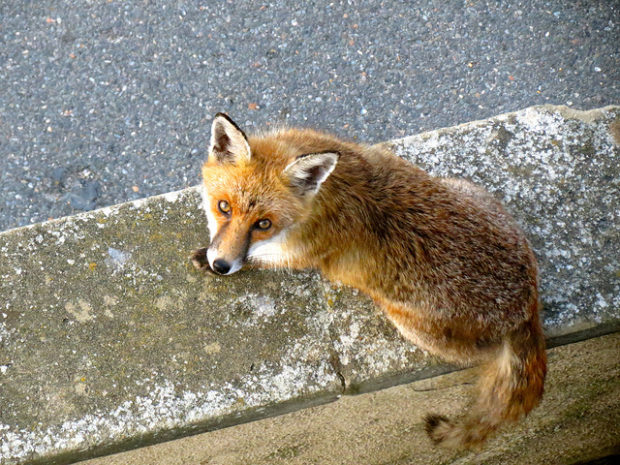 If asked, the fox might say that one of the problems in her world, and ours, is that humans have overtaken her species as the most widely dispersed mammals. I might have asked her myself the other morning at dawn, but we were separated by the double-thick glass of French doors, and I was tongue-tied in awe. She didn’t even seem nervous. She was on the deck, calmly probing the corner where the boards meet the house, interrogating the closed seasonal entrance to my shelter. I’m the kind of human who, when faced with emotion, freezes too soon and ripostes too late, and a more specific question occurred to me only later. I would have asked, “How do you live with us?”

I had watched her and her mate explore the front yard when I first got up. On most dark Maine December mornings, quiet of lobster boats and planes and chain saws, I’m in the habit of lying in bed and reading in the gathering light and looking southeastward over the bay until the red bump of sunrise climbs out of the sea. But that day I got up in the gloaming of morn, when mice and voles make one last run, when deer graze and foxes patrol, when humans are mostly peaceful. Drinking orange juice near the French doors, I saw first one gorgeous red creature, then another, come into the yard and make a few perfunctory sniffs, perhaps smelling my poodle’s habitual morning toilet, then trot into the little copse of spruce to look for dessert or repose. Or so I thought. I had just started the coffee when I saw her again on the deck (I’m pretty sure she was female; they tend to be bigger than the males); she was clearly asking questions of the glass, the section of trim slightly rotting from salt air, the hulk of the house. Did she see the invader standing stock-still five feet away? Was I a harmless or a menacing shadow in the glass? I don’t know. I have no idea what an animal thinks (except when I’m entranced by an animal, and then I’m not thinking at all). I do know that I didn’t really need caffeine (or email or even Trollope) that morning. I was high on natural possibility.

The fox and many other “resident urban” carnivores and herbivores are thriving even as life for humans in our cities and suburbs becomes more dangerous. Deer and coyote and turkey and fox, formerly wild, now exist in a kind of half-tame state, still a little wary around the bipeds but making an excellent living among their constructs. Of course, animals are generally protected by law, and the laws seem to work, which cannot be said of many of our attempts at self-regulation (witness: greenhouse gases, rainforest protections…).

With our own sprawling over-population we bring along other problems. In Australia in the early 1800s, for example, English gentlemen brought the fox to the colonies; it now, along with its favorite prey, the rabbit, over-runs the place and is considered a serious pest (the feeling may be mutual), to be shot on sight. As for human invasions, well, what mountaintop or desert dune is still safe from truckers and trekkers and do-gooding improvers?

Fox and human invaded New England more or less together, traveling across North America from Asia and setting up their dens and longhouses when the glaciers retreated some 12,000 years ago. For the next 11,500 years humans lived peaceably here, evolving with the warming climate and diversifying landscape, managing their several tribal territories sustainably. They killed animals, certainly, but only for food or clothing, taking what they needed and not what they craved. Then the white man came, and how incredibly quickly life has devolved. In just 500 years (a blink of God’s eye), white men were killing foxes to protect fat chickens and tame cats or for mere sport, and red men were killing foxes to trade their pelts for European guns and rum. Yet the foxes survived, and are thriving, giving us not exactly warm greetings but a cool toleration.

Indeed, they thrive in the midst of us, smartly and calmly (as often we don’t). Reynard is even getting along with its sworn enemy and cousin the coyote. Our parks and our backyards are justly divided between them. Natural laws work. Human laws help. And this peace has little to do with my own obsession, the conservation and protection of land and the creatures of the wild. Nature can thrill in a mown front yard.

But there is little to check the human population. In natural settings, plants and animals are found with friends and enemies, and this long-worked-out ecology provides a check on unfettered population growth. Invasives, however, are often transported without their evolutionary context. Kudzu and green crabs carry no gifts of coexistence. And what evolutionary context will check humans? The fact that we’re the only species that willingly seeds its own destruction? Even on the relatively stable coast of Maine, a hundred years from now we may well have burned the land and poisoned the air and polluted the sea so much as to seek shelter, like the fox, underground. And when we emerge, will foxes and coyotes and wolves and even feral poodles find us wandering sightless, thirsty, cancer-ridden, and at last give us our just deserts?.

Maybe Antarctica will be a safe haven. It’s the one continent on which foxes don’t live, and that was true for humans too, until the crazed polar adventurers of the early 20th century “conquered” it for God and country. Yet the last hundred years have been relatively kind to Antarctica. No one owns it; the inevitable territorial claims were resolved by the Antarctic Treaty System in 1961, which cooperation, like New England’s old Wabanaki Confederation, seems to work. Antarctica is also protected by its vastness, its harsh climate, its miles-thick ice, its minuscule population. The only exploitation so far is purely scientific; mining and fishing and whaling and sealing are prohibited.

And it too may be doomed. Antarctica might represent our best cooperative instincts as humans, but the chemistry of the cold Southern Ocean is particularly susceptible to lethal acidification; wildlife and fish, as in all other oceans, are being strangled and choked by marine debris; sunlight breaks down that garbage into deadly microplastics there too; and how long before Antarctic ice, 70% of the world’s fresh water, becomes a brand name? I can imagine the muddy landscapes, the schemes, and the wars of the future. Humans will swarm there like the foxes of Australia. What will kill the glaciers first, mining or melting? And there will be no one to shoot the pests except themselves.

Okay. Enough. (This is what happens when you ask questions of foxes.) For now, I’m content to observe a wonder of nature, an animal smart enough to have found her place in a changing world. I’m glad she has a den to escape storms and heat and guns. I’m thankful I still have one, too—and that for just a moment, we took in clean air and the warm red blaze of sunrise together.

Image:  “Seaside Fox” by Sunwalker, licensed under CC BY 2.0

Jim Krosschell
Jim Krosschell divides his life into three parts: growing up for 29 years, working in science publishing for 29 years, and now writing in Massachusetts and Maine. His essays are widely published; a collection of those Maine-themed will be published in One Man’s Maine (May 2017) by Green Writers Press. His book Owls Head Revisited was published in 2015 by North Country Press.

Jim Krosschell divides his life into three parts: growing up for 29 years, working in science publishing for 29 years, and now writing in Massachusetts and Maine. His essays are widely published; a collection of those Maine-themed will be published in One Man’s Maine (May 2017) by Green Writers Press. His book Owls Head Revisited was published in 2015 by North Country Press.