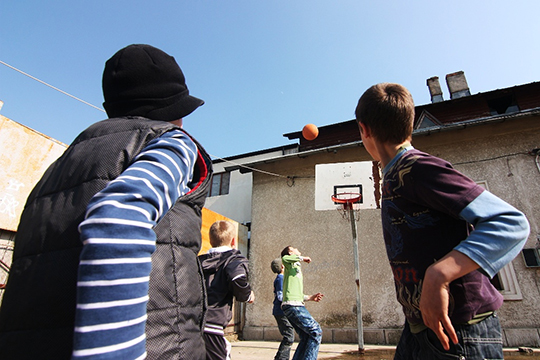 Two blocks from my house, tucked behind the homeless shelter, is High Street Park. It’s an urban playground, with a typical, modest assortment of slides and structures set on an island of woodchips. The woodchips aren’t the best material. Some get in children’s shoes as they play, and some get scattered around the rest of the park. They litter the small asphalt loop circling the playground where my two boys used to ride their bikes, and they’re sprinkled about the basketball court, which is annoying if you want to play basketball—though not as annoying as the broken glass.

When my sons were little, I’d walk them to High Street. It’s where they learned to slide down poles, kick and throw balls, and ride bikes. It’s where they would swing and I would pretend to be a person walking, unaware, and get bumped by their feet as they swung forward. I’d spin and howl in mock pain, and they’d laugh and demand “Again.”

Some years back, before the city cracked down, the park was almost uninhabitable as the weather cooled. People would let their dogs shit in the woodchips, and they wouldn’t clean it up. Too cool to decompose, and too warm to freeze and crumble, the turds just sat there for weeks. I spent a few visits frantically hopping in front of poop before my boys stepped in it, circumscribing the “safe” area.

It’s not a lovable park, not clean or beautiful. Some might say it’s not especially safe, given that it is set in the middle of a block, back from any streets, and that the homeless shelter, with its handful of documented child molesters, borders it.

And yet, it is beautiful. When my youngest son, Guthrie, was an infant, I would wheel him to the park, my other son, Aidan, three years old, walking beside us. When we would arrive, Guthrie would sit in his stroller, watching, as Aidan climbed the jungle gym. There would often be a few older boys about, and one of them, Frankie, would come over, lean down, and talk to Guthrie. He knew to use the high-pitched voice that babies love. Guthrie would listen and smile.

A few years later, when Aidan was into baseball, he and I would go to High Street and I’d pitch him whiffleballs on the basketball court, the park’s only open space. He’d try to knock the ball over the chain link fence into a small parking lot. Sometimes Frankie and his friends, Greg and Armando, all young teens, would join us, and we’d play a casual game of home run derby. Those boys would argue among themselves, but they were always kind to Aidan, always would tell him how good he was. The simple, encouraging words from older boys meant a lot to Aidan. I wonder if he even remembers them now.

The boy Greg, a skinny, dark-skinned Latino, was in an awful accident a couple years after those games. He and a friend had been riding a bike together, neither with helmets, and they turned a corner and got hit by a truck. The accident was serious enough to make the local nightly news. Greg got hit especially bad and had to be medevac-ed to Boston. I remember hearing the helicopter whirring over Salem that day and wondering what had happened.

I felt sick when I heard Greg’s name and realized who he was. I not only recalled the whiffleball, but a holiday concert at Horace Mann Elementary School. Greg and my boys both attended Horace Mann, and when Aidan was in 2nd grade, Greg was a 5th grader. At the end of one of the 5th grade’s songs, Greg scooted off the bleachers where the students were stacked and ran and slid on his knees across the stage, arms flung wide. It was a nice touch to the show by the school’s music teacher, and Greg was a perfect choice: graceful and ebullient. The younger children loved it.

Greg had gone on to develop a love for basketball and real skill at playing it. He had made the Salem High varsity as a freshman in the winter before his accident.

His injuries were severe. Greg was in the hospital a long time, and was virtually paralyzed. The basketball program helped raise money so that Greg’s family could get a wheelchair, a handicapped van, and a remodeled handicap-friendly bathroom. Now, three years later, Greg is still unable to walk.

I know that Greg is still in a wheelchair because I saw him at High Street Park recently. I had been at that park with Guthrie, now a seventh grader who likes basketball. Guthrie was taking shots and I was rebounding when a car pulled up and parked in the lot. Then another followed. Four stocky, short guys got out, one bouncing a ball, and they started shooting around. Soon, a van pulled in, and two more guys got out and helped maneuver Greg out the side door. They wheeled him over to the court and placed him just behind the basket, next to the pole that held it up.

And then these six guys, all about 20 years old, all a bit overweight, played three-on-three. They played hard, swearing at each other over fouls and the score, but they also played loose, friends who laughed at each other’s screw-ups—a stupid, too-fancy pass, a humiliating blocked shot. Greg laughed, too.

One March day well before Greg’s accident, back when Guthrie was still a little boy who liked playgrounds, he put on his coat and red and blue knit cap with the ties that dangled down around his chin, and I took him to High Street. There was a group of young teens, boys and girls, hanging out around the basketball courts. They were noisy–the boys making the girls squeal–and boisterous, shoving and pushing, an occasional swear, tossing woodchips at each other. They were teens, and, like many teens, they were mildly annoying and stupid. One of them, a tall blond boy with a bowl-shaped haircut, had made faces at me a few days earlier when I asked if Aidan and I could shoot at the same basket he and another boy were shooting at. Watching those teens, I thought—grumpily–how this was what Aidan would be enduring in the next few years as he headed into junior high.

Suddenly, there was a flurry of motion in the group, and they all crowded around something under the basketball net. “Oh, he’s alive,” I heard a girl say.

Then there were more squeals, and the crowd parted, and I saw the blond-haired boy with his hands cupped in front of him. He was holding a baby bird that had fallen out of its nest to the concrete. He looked up at the backboard, then stepped to the pole.

“Come here,” he said to another boy. “Come here and hold it.” The other boy came forward and put his hands out, and the blond boy eased the bird into the other’s palms.

Then he climbed the pole, wrapping his arms and legs around it, pulling, and pulling again, until he was near the backboard and the nest that he must have seen somewhere on its back side. “Give him to me,” the boy said, reaching one hand down. The other boy raised his cupped hands and the blond boy clutched the bird, lifted it up and placed it in the nest. A girl clapped a little, the boy slid down the pole, and they all went back to being noisy.

Pretty soon Guthrie was ready to go, so we cut across the basketball court. I peeked up at the nest as we passed under the backboard. “Look at that,” I said to Guthrie, “the baby bird is back in the nest.” Then we ducked under the chain that kept cars from driving onto the playground and walked home. Maybe we even held hands.

Photo:  “Basketball” by Nicu Buculei; licensed under CC BY 2.0

J.D. Scrimgeour
J.D. Scrimgeour’s book Themes For English B: A Professor’s Education In & Out of Class won the AWP Award for Nonfiction. He has also published two books of poetry, and a CD of poetry and music, Ogunquit & Other Works.This past summer Only Human, a musical that he wrote with his two sons, was performed at Ames Hall Theatre in Salem, Massachusetts.

J.D. Scrimgeour’s book Themes For English B: A Professor’s Education In & Out of Class won the AWP Award for Nonfiction. He has also published two books of poetry, and a CD of poetry and music, Ogunquit & Other Works. This past summer Only Human, a musical that he wrote with his two sons, was performed at Ames Hall Theatre in Salem, Massachusetts.