Soojin texted bright and early, hoping to gather Alexis and me for prep. It was time for our close-up: two international adoptees back in the motherland making our debut on national television. The Korean CNN—YTN—the country’s first all-news TV channel, would be taking us to Bugak Palgakjeong Pavilion, one of the highest peaks in Seoul, offering sweeping panoramic views of the city. Unlike the famous Namsan Seoul Tower with its teddy bear museum, children’s theater, food court, restaurant, digital high-powered telescope, cable car or dramatic “light art” calling attention to itself after sunset, Bugak Palgakjeong Pavilion remains free of tourists. No wishing pond. Nothing to give it the reputation of being a romantic mecca, nothing to lure movie stars to secure their padlocks on the roof deck fence to symbolize their eternal love, and throw away the key. The pavilion is a quiet affair, a place better suited for older couples than young lovers—or those who wish to remember those no longer with us.

When the YTN van pulled up, out stepped two cameramen who spoke no English and a young, beautiful producer with the best English I had yet heard spoken by a native Korean. On the way I would learn that she had spent a year in New York City as an English major studying Jane Austen.

“Hello, I’m Junghwa.” She bowed deeply. “Thank you so much for doing this.”

Soojin initiated a short exchange with her and the cameramen to make sure our interview stayed on the rails, before we all piled into the van to begin our drive across town toward the Blue House—Korea’s White House—and beyond.

Our ascent up Bugak Skyway involved driving through a 19-mile forested village peppered with the residences of Korea’s elites: politicians, celebrities, and industry titans. As we drove up the dizzying mountain, the landscape grew lusher and more canopied, hiding us in its nestled wilderness. Then, suddenly, a flash of golden light would interrupt the shadowy vegetation, breaks in its ancient forests revealing a “Hallyu” starlet’s avant-garde abode or a taste of the promised view of Seoul from the top, as the city receded farther and farther into the distance.

Once at the summit, we climbed the stairs of the octagonal pagoda to a scenic spot where all of Seoul would serve as our backdrop. But after the suspense of our drive, seeing it in its completeness from such a great height felt like a lie. From here its streets were muted and the buildings felt empty. With enough distance, all cities seem still. I pretended to snap photos on my phone as they filmed me taking in the vast space between Bibong and Munsubong Peaks, a valley flooded by a brief stint of civilization, and bookended by the eternity of its commanding mountains. No wonder it was once where Korea’s ancient kings built stone walls to guard their palaces from Chinese and Manchurian invaders.

As the cameras rolled, I tried to imagine what all of this looked like when I was born but before I was adopted, when it was still recovering from being the most decimated major city in the history of the modern world after the armistice was signed between the US and North Korea in 1953. Staring at the other mountains towering over the cityscape, I wondered how many secrets they held.

Junghwa and I walked along dappled paths, pretending to be steeped in conversation, collecting footage and beauty. After Alexis was filmed, peeking through the tower binoculars that overlooked the city and showing childhood photos to a charmed and captivated Junghwa, we were shown an oversized red mailbox called “Slow Mail,” a place where people post letters to be mailed in a year’s time, like an epistolary time capsule, a letter to the future.

An extension of the “Slow City” movement headquartered in Italy, the first Slow Mailbox in Korea was installed in 2009 as a breath-catching reaction to the fast-paced delirium of one of the world’s most modern cities and had since spread throughout the country. They come in many shapes and sizes, but are always handsomely painted—usually fire-engine red—with either Korean characters or simply the word “Post.” This one was the biggest in all of Korea, the size of a small telephone booth. Standing in front of it made one feel small, like a child, when most of the world was unreachable.

Junghwa handed us stationery from the gift shop, cards with a watercolor painting of a house surrounded by flowers instead of a fence, and led us to separate picnic tables where we penned messages to our faceless birth mothers who would never see them. After being filmed under the shade of the spruce trees as we wrote with bowed heads, we took turns reading our letters to the camera. I went first. My message was warm but prosaic; I had said everything in the letter I had written to the mysterious woman who birthed me before I arrived. I had already screamed into the void and sliced those veins — and the blood had already dried.

But Alexis had not yet gone there. She began reading as she might any piece of writing — a deep breath, a touch of nerves, and a clumsiness of a voice trying to find its rhythm as the lens of the cameraman stared at her. “Dear Mum,” she began in her sometimes British, sometimes Danish, sometimes Spanish accent. “I don’t know if you’ll ever read this, but I wanted you to know that I’m here in Korea… lookin’ for you.” She paused. “I know we’ve never met, but if you could see me—” she stopped, staring down at the piece of paper shaking in her hands.

Junghwa and Soojin glanced at each other. “I’m sorry,” Alexis apologized. Then she continued.

She began to describe how, when she was a child, she would think about her birth mother, wonder what she looked like and how she was. She read on until she couldn’t, until she melted into inconsolable tears, a grieving star collapsing under the profound weight of its own unclaimed existence, until she sat holding her letter, palms open to the sky, like an empty offering.

The cameramen quietly lowered their cameras. Soojin sat at her side, and asked if she would like to stop. Without looking up, Alexis confessed, “I can’t keep readin’ this.”

Once she calmed down, we heard Junghwa’s voice gently explain, “There is one last shot. It doesn’t require any talking. Would you feel comfortable doing that?” We were to walk across the landing with our letters and place them in the Slow Mailbox, with all of Seoul and its mountains as our witnesses.

“Yeah, okay. I just need a minute,” Alexis began wiping her eyes. “You’re smart, Mee-ok,” she looked up at me. “You brought sunglasses.”

After she gathered herself we waited for the cue, then tried to casually walk to the massive mailbox. But when we went to open the slot, it wouldn’t budge. We turned and stared helplessly into the camera. Soojin came running over, her dress straight out of a magazine from the 1940s — a long, flowing, flowery skirt and perfect Korean hair billowing behind her. She tugged at the handle, then called out to Junghwa in Korean.

It was locked. Slow Mail wouldn’t be taking any letters that day. 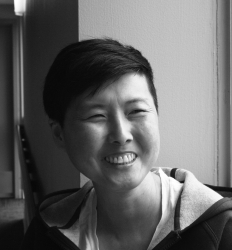 Mee-ok
Mee-ok is an award-winning essayist, poet, and memoirist. She has been or will be featured in the LA Times, Boston Globe, River Teeth, Cincinnati Review, American Journal of Poetry, Michael Pollan’s anthology for Medium, and others. She is also featured in [Un]Well on Netflix. More at Mee-ok.com

Latest posts by Mee-ok (see all)