Glimmer on the sidewalk
August grit smells
of old hotdog water
pigeons bathing in fountains
children running into
fountains shimmying up
fire-escapes and this whole
damn apple wavy with summer
stank and construction yells
and how mommy stops me from
buying Arancini as I quell
saliva and lust
boys grow tall and harder
in their Jordache jeans
breakdancing near the jungle
gym and Gina can’t have enough
Aquanet to keep her bangs
so high closer to Empire
her state the apple of her ass
taunting the entire playground
even the cigarette smoke
snakes a corner
all over, all over
there are diamonds on Canal
Street there are needles in the sky
and hawkers hiding
from police and their warning
cries down street grids are
oceans sonic and important
so blankets of fuchsia,
sienna wrap up as
hands hide tchotchkes.
Fruit dragons all running
away from this scrabble,
gaudy dragon-ghetto
of the Northeast.
Chinatown, Chinatown
how your alleys run my veins.

Click here to read Christina Liu on the origin of the poem.

Christina Liu:
My mother’s “talk-stories” were mythology and bitter tea for me. We share the same, strong line of fate on our right hands. Shaped by historical destiny, she stopped her dancing, lost her family for years to work-camps in Maoist China, burned books in the attic with my aunt; their cinders alight our conversations even now. I try ineloquently to shape them into a Western narrative, but how is one to tell a story of escape to Hong Kong by swimming, through two imprisonments and the loss of friends, through a daughter who is barely literate in written Chinese?

“Snapshot” owes itself to my parents, who settled initially in the Bronx, NYC, and then in Chinatown. Many of the images are distinctly Western, and of a distinctive milieu: Reagan, Michael Jackson, big hair shellacked in Aqua Net, Jordache Jeans. The hot asphalt and architecture of fire-escapes are indelible for me, as are the senses I did not capture: crabs in buckets, spit and sizzle of hot woks, Capezio ballet flats. When I was in graduate school, a classmate asked why I retold Greek myths, Grimm’s fairytales: “You are Chinese. You should be writing about Chinese stories.” I had no answer, only that I did not wish to write in Chinoiserie, in clichés. “Snapshot,” with its Western images, feels Chinese to me. It is who I am, after all. Its alleys run my veins. 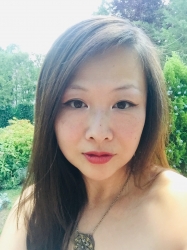 Christina Liu
Christina Liu's parents escaped China's Cultural Revolution, settling with her to live in NYC's Chinatown. This backdrop informs much of her writing. Christina Liu's work is published in Dream International Quarterly, Phantasm, and featured on the CD, Spoken Live! (Arula Records). Christina has been a member of Streetfeet Women since 2014, a non-profit writing and performance ensemble and performs with them regularly. Her poems, "Only," and "I Am," will be published in the upcoming Frequency Writers anthology, tentatively titled, Word in World. Her recent readings include: The Boston Poetry Marathon, The Boston Poetry Salon, Jamaica Plain’s Chapter and Verse. In November, she will take part in the Brockton Public Library’s “Voices of Diversity” program. She holds a BA in Writing, Literature, and Publishing and an MFA in Creative Writing from Emerson College. She is currently an academic advisor and writing instructor at Boston Architectural College.