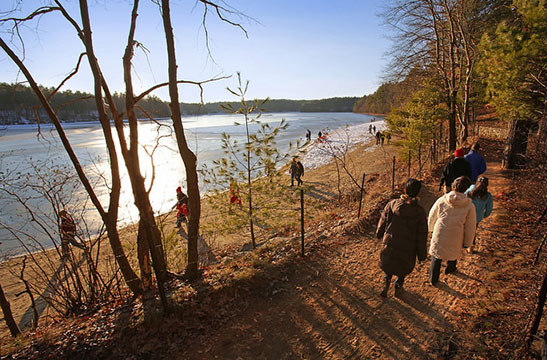 The Tonic of Wildness

Some of the least transcendental moments of my life have been spent at Walden Pond, chaperoning field trips.  I teach high school English right outside of Boston in Revere.  It’s a city; our students are “city kids.”  They wear urban style clothing, listen to rap, and rarely venture out of the confines of their neighborhoods.  Therefore, when our eleventh graders study American literature, including the transcendentalists, it seems like an English teacher sin to live so close to Walden Pond and not to take our students.  A few years ago two colleagues of mine, Kelly and Diana, decided that this is exactly what we should do.  We thought that at the cost of a short bus ride, we would be able to better connect them to Thoreau, his writings, and his ideals about the beauty of nature and importance of simple living and simplicity.  We had no idea what we were getting ourselves into.

“I am a monarch of all I survey, my right there is none to dispute.”

Before the first field trip, we suggest the “proper attire” to our students:  very casual.  Sneakers and t-shirts are what we have in mind.  But apparently, “casual” in city high school context means something different altogether, or so we learn when Kevin shows up in jeans that look like a parachute, hooded sweatshirt with silver airbrushing, black baseball hat, and brand new suede construction boots.  As the tour guide begins to lead us along the flat 1.7 mile trail that encircles the pond, I get a funny feeling about Kevin.   While the other students lament the lack of cell phone service (and our resultant vulnerability to bear attack), Kevin keeps glancing back to see where the teachers are.  This is always a bad sign, so I try to keep a tracking eye on him.  As we stop to hear about Thoreau’s favorite fishing spot, I see Kevin whisper to a friend, who hands him something that he shoves into his pocket.  He then slips through the trees into a little clearing, and I follow, to catch him in the act.  Probably smoking, I think.  Maybe something more serious.

Instead, I see Kevin sitting on a tree stump with his suede boot in his hand and a packet of tissues in his lap, lovingly trying to clean a spot of mud from his shoes. There is a small pile of discarded tissues on the undisturbed forest ground near him.

“Miz, it’s nasty here!  I have mud all over my boots!” he informs me.  “These are $120 boots!”  He believes that this fact should certainly justify his actions.

“What about the pile of tissues you have there?”  I ask.

I try to appeal to his sympathy for wildlife.  “Maybe the squirrels who call this clearing home will care.”

“Are the squirrels gonna pay to have my boots cleaned?”

“How would you feel if someone threw muddy tissues all over your living room?”

“I’d punch them in the face!” he replies.

I see that we are getting nowhere fast, and I hear the group moving off on our tour.  “Kevin, just please re-join the group.”  He glares at me in triumph as he replaces the boot onto his left foot and struts off toward the path.  I stoop to collect his pile of trash, utterly frustrated.

“I went into the woods because I wished to live deliberately…”

“Nicola!!” I yell, running down the narrow path.  Nicola’s friends move reluctantly out of my way as I follow the puffs of cigarette smoke drifting to the back of the line.  “Nicola!”  I trumpet again as I close in on her.  “Nicola, are you smoking!?”

“Miz, you really need to calm down, we’re outside!” she informs me, tapping ash onto the hallowed ground.

“Nicola!  This is a state park.  We are in the woods.  Haven’t you ever heard of Smokey the Bear?!  You can’t smoke here, now please put it out!”

Nicola glares at me through heavily lined eyes.  Some of her friends laugh nervously at this standoff.

“Whatever, Miz,” she says, stamping out her cigarette on the ground, and leaving the butt for the wildlife.

My husband is a “Leave No Trace” master.  This is not a made-up title; he has a laminated card from the Appalachian Mountain Club displaying his credentials.  People are supposed to erase any trace of their visits to the wilderness.  No candy bar wrappers, water bottles, or even orange peels.  Thoreau might well have subscribed to it 150 years before it had a name.  Nicola, with all the advantages of that century and a half to consider the question, does not.  Her discarded cigarette joins the crumpled tissues in my pocket.

Further down the trail, I hear the elevated voice of Diana, another of my colleagues.  I hustle past a group of students and see Diana admonishing a small group of kids standing at the pond’s edge.

“But Miz!  I’ve seen people do it on TV!”  Juan is trying to defend his actions.

“Juan, that’s true, people do feed ducks, but they usually feed them pieces of bread.”  Diana tries to explain.

“That’s because they don’t know any better Juan, but I really don’t think it is good for ducks to eat jalapeño Doritos.”  She tries to explain this with caution, trying not to hurt his feelings.  It seems like we should have taught these kids more than just Walden before bringing them here.

All of a sudden, they are quiet.  Our teacher instincts kick in as Kelly, Diana and I exchange warning looks, and move off down the path towards the gift shop.  We are at the end of the day, our ropes, and our sanity.  We brought them to Walden to experience nature, the sublime, solitude, maybe even the universal oversoul.  We ended up picking up trash, preventing forest fires, saving the digestive systems of waterfowl and reassuring the students, “Yes, we are still going to Burger King on the way home!”  This trip had achieved none of our lofty expectations, and now all we hear coming from the kids is ominous silence.

In the distance, we see them all standing in a group near the horse paddock.  The state police have a few horses at the pond stationed near the gift shop.  Our kids are standing there, motionless and quiet under the trees.  We approach, and see a very large palomino horse standing near the fence.

I know this is a palomino only because my best friend growing up, Adrienne, rode horses.  Just like my students, I am a city kid.  In fact, I grew up in Revere, and left it as rarely as they do.  Never mind Walden:  Boston, just a ten-minute train ride away, was a place my friends and I never visited on our own until after we were in college.

I did, however, have some exposure to nature and to the woods.  Adrienne’s family had a summer home in New Hampshire and they would take me with them on vacations.  Unlike many city kids, I had the opportunity to play in the woods and ride horses.  I learned an appreciation of the beauty in nature I would not have had otherwise.

Steven, the tallest and possibly the loudest of our students is dwarfed next to this large animal.  I hear Steven do something he has never done in my presence before…whisper.  “Miz, can we touch him?”  he asks me.  These kids have never seen a horse up close, and they don’t know what to do.  They don’t try to feed it, tag it, or offer it a cigarette.  They are simply in awe of it.  I walk Steven up to the horse.  “Miz, is he gonna bite me?”

“No Steven, he thinks you might feed him,” I reassure him.  I reach my hand up to the bony snout and pat the horse.  He jerks his head back a bit in horse reaction as he rolls his lips.

“Yo!  Miz, watch out!”  The students back off at this noise.  I tell them to look at his ears.  When horses get mad, they pin their ears back.  This horse’s ears are sticking straight up, so we are fine with him.  Now it is Steven’s turn.  He doesn’t want to look like a wimp in front of his peers, especially when I had already approached this huge animal first.  His eyes on those ears the entire time, ready to bail if they so much as flicked, he extends a tentative hand, and lightly touches the animal’s jaw.  One by one, the kids take out their cell phones, and snap pictures for their followers.  After Steven breaks the ice, a few other kids pet the horse as well, making sure to document this with their cells.

This interaction does not necessarily fit in with our lofty goals and expectations for how our students would react to Walden Pond, but there is something significant about it.

By the time we return to school, the horse was been transformed by imaginations and tough talk into a beast of epic stature.  The kids did not pet it; they tamed it.  It was ten feet tall with red eyes and vampire teeth.  I hear about it all week from my other students.  “Miz, did you hear about how Steven rode that HUGE horse??”

Despite the re-telling liberties taken by our kids, in my memory, the moment exists in simplicity.  A group of city kids enter Thoreau’s woods.  They litter, give ducks indigestion, and still manage to commune with nature, if even for a moment.  For some students, the “simple” attention they gave to the horse’s ears may have sparked them to respect Thoreau’s vision and realize the natural world has much to tell us if we know where to look.  Or if not, if they’re not more sensitive to the nobility of living simply in the woods, maybe they’ve at least wised up enough to wear grubby sneakers next time they visit Thoreau’s peaceful pond.

Photo “Walden Pond, Concord” by Massachusetts Office of Travel and Tourism, licensed under CC BY 2.0