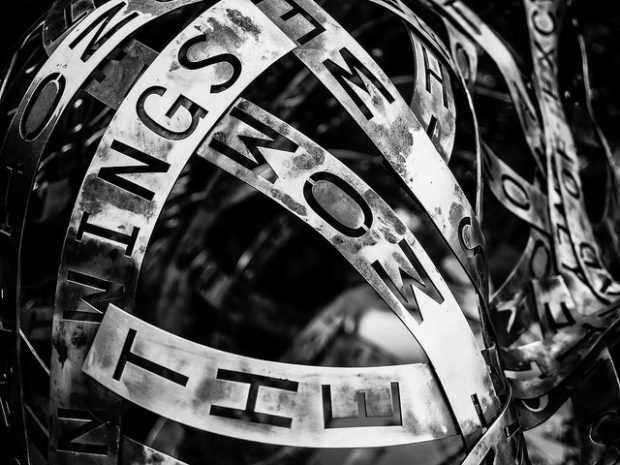 Hover your mouse over a line to reveal the text. If you’re using a touchscreen device, touch any line.

In the storm scene, when the lake bursts.

One possibility is that the extra copies actually cause cells to commit suicide.

Winds roar and cities flood, or people cough and die.

How well can you actually have nothing on your mind?

Shaking causes rock and clay to behave like liquids.

A long colorful inconsistent parade of blame and acclaim.

You were reduced to ash.

In a small space between two support beams that can only be reached by a ladder.

I myself have never seen a sage grouse but I am married to a man who has.

She rarely walks very far without someone lending a hand and entering into what she calls “the space of performance.”

Now polluted with cadmium and lead.

In cages with pockets of darkness and light.

You have tickets to one of the following performances.

Their eyes had adapted to the cloak of darkness.

Where am I, right now, people?

Celestial shows will be visible by simply looking toward the sky.

A shout up the dumbwaiter would bring food up by pulley.

Relying on butterfly wings to survive.

The practical implications of these results are somewhat limited, of course because they involve mice, not people.

The look of buttoned up Edwardian “fallishness”

No one was injured as a result of her poor decision.

For example, when a blue-square touches a pink square.

Days to assemble. Months to embroider.

Acta Diurna note:
Acta Diurna is a series of sentences culled from newspapers, a daybook compressed, and a found composition arranged as a continuous narrative and cultural commentary. This book is daily news, documentary poetry, a catalogue of perspectives, a metonymical post and a global body of text. How as readers might we engage with constant streams of urgent headlines, articles and alerts? How do we interpret the countless juxtapositions between multiple lives, stories, locations and histories? Acta Diurna is an attempt to sew text into textile, to compile multi-voiced reporting and to present a collective alternative assemblage of news.

Photo “Ball of Words ” by  Sharat Ganapati; licensed under CC BY 2.0

Laynie Brown
Laynie Browne’s most recent collections are You Envelop Me (Omnidawn, 2017), P R A C T I C E (SplitLevel, 2015) and Scorpyn Odes (Kore Press, 2015). Her honors include the National Poetry Series Award, the Contemporary Poetry Series Award and a Pew Fellowship. She teaches at U Penn and Swarthmore College.

Laynie Browne’s most recent collections are You Envelop Me (Omnidawn, 2017), P R A C T I C E (SplitLevel, 2015) and Scorpyn Odes (Kore Press, 2015). Her honors include the National Poetry Series Award, the Contemporary Poetry Series Award and a Pew Fellowship. She teaches at U Penn and Swarthmore College.