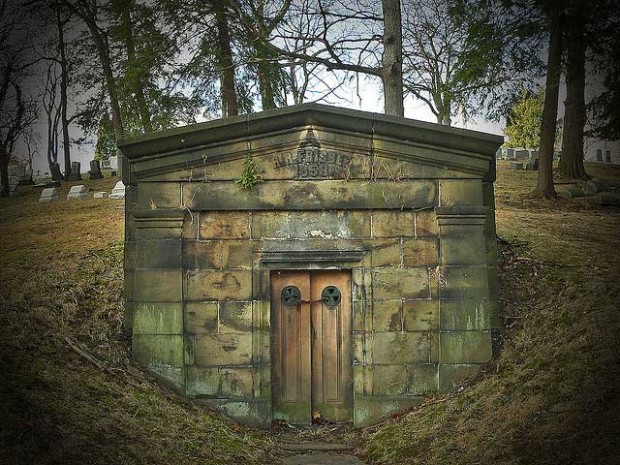 Windows above the doors,
as I remember it, at the Board of Health,
tuberculosis skin test station nearby
built when even waterworks
were pretty in a way, green copper visors
over red brick blackened in time,
and the feeling of file cabinets
full of sputum and viols
of venereal samples,
slices of human lung prepared
for slides, as if the biology
room had mated with raccoons,
or I got that idea from the entry
to the Allegheny Cemetery,
home of the bones
of Steven Foster,
and bones attached
to place names and streets
Wightman and Negley,
and Rankin, where a friend
was the son of a Russian priest,
and the swells’ planting
contiguous with roughened up places,
Bloomfield, Friendship, Lawrenceville,
and carved Union cloaks
draped over tombstones,
and the incinerated remains
of the Armory workers
who exploded, and Josh Gibson
with his bat. My own bat,
I dreamed of after walking
there in the cold. It was mad
because I sliced its belly
with a potato peeler
and bonked it with the potato grater
as it flew at me in the kitchen,
making latkes, or maybe gnocchi.
Bat dreams, maybe they are good,
just an early threadbare Pittsburgh
boiled down to abstract streets
with its Scotch-Irish aristocrats
still somehow Presbyterian
with their Gothic fonts
and conspicuous paucities.
The vistas of sunsets and lagoons
were lit up in all the stained glass
mausoleums turned on by sundown,
the irrationality we bring ourselves
or in it comes in with clouds from the lakes.

The next day, we all felt a bit fevered and ill.

Click here to read David Blair on the origin of the poem.

David Blair:
I guess there are a number of issues presenting themselves to me in this poem, which may be why it is mainly in a single stanza. I love cemetery poems. I consider this one to be a distant great grandchild of a Hardy poem, only without talking ghosts and set in Pittsburgh. In something like “Voices in a Country Graveyard,” the whole world of emotions and the culture sits next to each other, humor and grief and unfairness. I think Hardy’s graveyard poems are more human and truthful and multi-faceted than the self-perpetuating elegist every poet also is on some level.

The bat is a bit of comedy, but I own it. My wife and I have a large taxidermy bat mounted in a case above our dining room table. It is beautiful and huge and appears to be wearing an orange mohair sweater vest. The bat I dreamed of was more like one of the flying monkeys in The Wizard of Oz, and yes, I was grating and peeling potatoes, and I inadvertently stabbed it in the belly with the tip of the potato peeler, drawing blood, pissing it off, and scaring the hell out of me. We were sleeping on a mattress on the floor in my old bedroom at my parents’ house. I woke up and my daughter was coughing, which turned out to be the first sign of the flu, maybe aggravated by the cold we had gaily walked in, New Years Day, in Allegheny Cemetery, with my sister Maureen.

David Blair
David Blair is the author of Ascension Days (Del Sol Press, 2007) and Arsonville, which will be published by New Issues Poetry & Prose in 2016. He teaches at the New England Institute of Art in Brookline, Massachusetts.
Latest posts by David Blair (see all)
Share Tweet

David Blair is the author of Ascension Days (Del Sol Press, 2007) and Arsonville, which will be published by New Issues Poetry & Prose in 2016. He teaches at the New England Institute of Art in Brookline, Massachusetts.