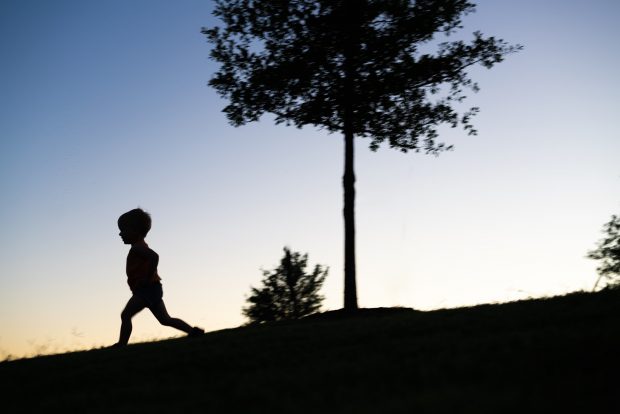 Get Off My Lawn

The yell that arose
from the shallow grave at the base of my brain
to interrupt my son as he reached
for the late lone tulip—
death-vaunting goth girl
queening the night in the middle of the day—
did not mark my best moment.

How could he know that dandelions were okay
to pick but tulips not? Not lilac branches
weighed down by their blooms
or a cascade of wisteria he could have used
as a shield against his enemies
who might have charged him and died
fake deaths en masse in the infinite
unfolding arms of its perfume.

Operation Wisteria Hysteria.
I prevented this. I who love
when children play dead and stare blankly
up, slack-jawed like the real dead
the one sky in each of their mouths
as they take turns on the ground.

Close my eyes! Close my eyes
with your thumbs. The dead say
to their friends who are busy
running around with clutches of grass
or waving whole pine saplings from afar
to toss upon the chests of their dead
before they stop short over the body
bowing their heads to intone
some sacred nonsense before subsiding
into silence the dead one can’t bear
for long. She gets up and walks off
to a beckoning swing.
And the rest of them follow.

This is called starting a religion.
So unlike what happens at preschool
where the teacher turns off the lights
locks the door and tugs the blinds shut.
Behind the shelves, behind the cubbies.
Be silent, still. Like a rock, she says,
while the intercom bleats, this is only a drill.

My child, my child—he could have told you
that was a perfect, dead-on rhyme, but he wasn’t
a very good rock. His leg shot out
from under him. He giggled and was shushed.
You could have asked him to be anything else!
A frog waiting for a fly, a gnome
charged with trapping an ogre.
Or just said the magic words:
camouflage     reverse ambush predation.
He would have taken the game more seriously.

The way he might have done on the playground
I-mean-battlefield, in the house I-mean-outer-space
had his mother not tried to teach him
the finer points of civilization.
That we take care of a thing someone’s cared for
by caring for that thing they have cared for
as I have cared for you and would hope
any stranger would let you live

so you could play dead and rise up
through the candied air of a different country
letting the flowers your mother told you
not to pick—those button-nosed roses,
that floppy poppy, those frowning
violets and tall purple afroed ones
no one knows the name of—
fall down your front and stream off your sides
leaving an outline of sticks and petals. 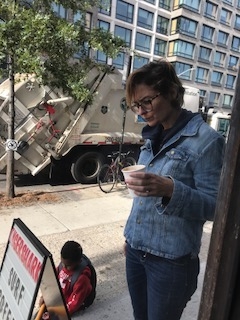 Tanya Larkin
Tanya Larkin teaches first year writing and poetry writing at Tufts University. She lives with her young son in Somerville, MA. She is the author of My Scarlet Ways (Saturnalia) and Hothouse Orphan (Convulsive Editions.) Her latest poems have appeared in Sixth Finch, BOAAT, and The Critical Flame.

Tanya Larkin teaches first year writing and poetry writing at Tufts University. She lives with her young son in Somerville, MA. She is the author of My Scarlet Ways (Saturnalia) and Hothouse Orphan (Convulsive Editions.) Her latest poems have appeared in Sixth Finch, BOAAT, and The Critical Flame.