News said he died of a cocaine overdose
in the elevator shaft of an old warehouse.

He languished there for months, they said,
under a layer of ice until authorities came

and sawed him out. I wonder if I ever met him,
this Johnnie, passed by him on the street,
gave him a few singles that he used to buy a coney dog.

Maybe he hated coney dogs and bought a grilled
chicken pita instead. Maybe Johnnie had been
a construction worker, or basketball coach,

slipped up, like Darius with the DUI, Bob with his temper,
me with the cheating and pleading and cheating again.

I want to know his face, Johnnie, but can only see his feet,
the rest of him dug up only to show
how the body rots into spectacle,

how the white of his tube socks glistened against the black ice.

Click here to read Justin Danzy on the origin of the poem.

Image: “Homeless by a Wall” by Garry Knight, licensed under CC 2.0.

Justin Danzy:
I only know what the news told me: that Johnnie Redding was found frozen and dead from an apparent cocaine overdose in the elevator shaft of an abandoned Detroit Public Schools warehouse. It was early 2009. The mayor, Kwame Kilpatrick, was incarcerated, the city on the brink of bankruptcy, and Johnnie’s forgotten body served as a perfect symbol for the city’s decay. A decade later I’m still intrigued by him, the circumstances that led to him being in that warehouse, what he was like when he was younger, the type of man he was. I’d like to believe that he was a good man, that he tried to be a good man, before circumstances led him to his early death. Perhaps, in his heart, he was still trying even in those last moments, that even in his lowest moment he tried. I think of my father telling me once of his own struggle growing up with being good, with making good choices, and how there always felt like there was a force working in opposition to that urge to do good. I think that’s what this poem is about, that struggle to do good and how we, as men, tend to fail, often in the most unforgivable ways, for reasons we sometimes can’t even discern. The poem is about how, no matter the differences of our failures, we are all, not deserving, but in need of empathy and forgiveness and someone to see us in the fullness of our transgressions, as well as triumphs. 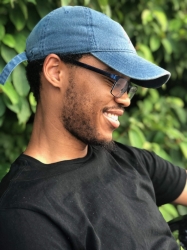 Justin Danzy
Justin Danzy’s work has appeared or is forthcoming in The Offing, New England Review, On the Seawall, New Ohio Review, Frontier, Guesthouse, and elsewhere. He was the 2019 Gregory Pardlo Fellow at the Frost Place and received an Academy of American Poets Prize from Washington University in St. Louis, where he completed his MFA. He is originally from Southfield, Michigan.