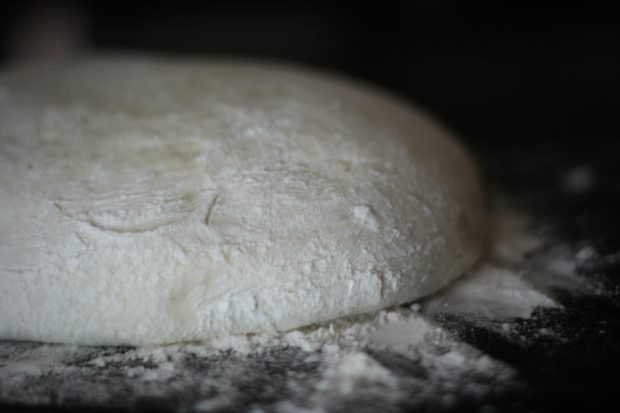 In Sickness and In Health, Poetry 0

Could this be madness, this? ~Sylvia Plath

Beyond all dusky upstairs rooms,
their doors fastened tight, locked by skeleton
keys I’ve lost in some drawer
of the mind, yeast feeds.
This dough I mixed without knowing.
This hidden swelling leaven.
Did I knead, shape, and proof
in witchy haste? Flee
down halls past other ingresses,
descend a dozen rectangles of ancient wood,
fling salt in my wake
past entrances sealed by tarnished knobs?
Even in that closeted darkness,
an oven, and somehow: heat.
A bitter meal bakes in shadow.
I step outside, close the front
handle on the whole house.

That sad rich bread
stays warm in its wardrobe.
Sours. Keeps rising.
Tucked in a round wicker basket,
covered in light blue dishcloth,
left inside a dark cupboard,
such bread will not cool.
From the porch, I drift towards bare oak trees,
yard littered with pine boughs from a winter storm,
black street where everyone I know
drives past on their way somewhere.

Click here to read Katie Fesuk on the origin of the poem.

Katie Fesuk: It’s difficult to explain the volume of iterations this poem endured until arriving in its current condition. It began, as most of my poems do, with a single line scribbled in what Richard Hugo calls a “triggering” notebook. The phrase knocking around my imagination was how often we (read: I) provide explanations for not attending an event or workday or playdate or class or happy hour. She’s just not feeling well, my husband says for me, or so sorry, I’m not feeling well. “Not Feeling Well” was the poem’s original title.

In my case, “not feeling well” was an excuse I often delivered at the last minute due to the real but often-invisible circumstances of living with autoimmune diseases. Pain and fatigue are frequent visitors that derail my happiest plans. Most people, even the closest of friends, really don’t want to hear about a disease they cannot see, one that robs them of company far too often, makes you seem flaky, unreliable. But you look just fine!

Not only does “not feeling well” cover the physical manifestations of living with pain, it also covers emotional wellbeing. Translated roughly, I’m depressed… my feelings are not well, I can’t feel normally, my body wants to be well. So does my mind. Like many, I can compensate and cover well, unearth cheer, dig deep for strength. But sometimes, I feel like I’m hiding something. Folks get tired of hearing you’re not feeling well. In my case, one of the autoimmune diseases that causes the most destruction is called ankylosing spondylitis, otherwise known as inflammatory arthritis. “Ankylosing” as in ankylosaurus—the dinosaur with its spiky back. That’s what my spine wants to do in response to inflammation; A.S. makes my body attack my spine, feet, knees, elbows, fingers, toes, and maybe someday, my eyes, heart, and lungs. 90% of those living with A.S. are male, most diagnosed as young and healthy men who suddenly develop extreme pain, fatigue, and swelling. With luck, someone discovers their elevated ANA levels, like mine, and they connect with a rheumatologist.

Frankly, it’s just plain weird for a woman in her forties to be diagnosed with ankylosing spondylitis. In all likelihood, I’ve had A.S. for years and shrugged off the pain as the result of too much exercise or lingering effects of a near-fatal car crash in 2012. In 2009, three months after my second child in fifteen months was born, my mother died after a long, terrible illness. She was my best friend, my greatest champion. I thought perhaps in the same way that Thoreau developed phantom lockjaw out of psychosomatic grief over his brother’s death from a shaving cut—well, perhaps my mother’s death had manifested physically… in my bones, in my hips, in my spine. There were many days that year that I wasn’t feeling well when friends called, when teaching demanded my time. My primary care physician calls me a zebra, as in a rarity; he has interns on their rounds listen in on my check-ups. I’m a zoo animal with an even stranger medical history and wild-sounding courses of treatment that run the gamut from x-rays to monthly biologic self-injections to merry-go-round rounds of steroids and immunosuppressants and chemotherapy drugs. My kids, my husband, my father (whose caretaker and guardian I’ve been for five years) are patient and kind and supportive. They don’t mind when I’m not feeling well. They forgive me everything and bring me hot tea and help draw Epsom salt baths and take advantage of the days when I feel fantastic, not just well. Humor helps a lot; but the darkness is always there, poised.

All of this is to say: the only metaphor that felt right was trying to explain how having this pain and sadness is almost like baking a loaf of bread, squirreling it away in some labyrinthine network of secret hallways in my house, then going outside to watch others’ happy lives pass by. How can I possibly tell anyone how broken I really am? What if they figure me out, an imposter? That bread—it’s like an animal, a creature, an automaton blob. Even tucked away, it works a spell like witchcraft or madness. It’s bad cosmic whack-a-mole, as Plath knew well. Reading her journals is like turning myself inside out. One questions one’s sanity. The speaker here can put that metaphorical rising dough in its place (hence the new title, “Mise En Place”), just as things should be in any kitchen worth its salt, but the bread, the darkness, the illness, the depression, the hard times, the grief remain.

While one may not be able to usher away the pain and frustration of the human condition—whatever that might be for the reader—the speaker can at least turn a flashlight in the direction of her hidden pain and say, look, that’s my burden. I come clean. Do you have one, too? Tell me about it.

My father is in hospice. I visited him yesterday for the first time in weeks through a 1 ½ inch opening in the window of his assisted living apartment. He receives memory care and now end-of-life care to ease his own diseases—mostly autoimmune—one of which will release him from his body in the coming days. This will become more sad rich bread to tuck in a wicker basket, but I’m also mixing together days waterskiing and fishing on Lake Sugden where I grew up with a father who taught me how to dig worms and bait a hook, who shoveled square rinks where I could skate on the lake after it snowed, who washed my car on weekends I spent home from college, with whom I got to dance on my wedding day to Marvin Gaye. And that’s the grace, the mercy, the light that balances out all that awful heavy darkness.

The Pangyrus LitMag editors saw potential in earlier drafts of the poem and agreed to consider publishing the piece once it had time (to rock on with cooking and baking metaphors) to rise and cool (thank you Cecilia Woloch and our Atlanta writer’s group). This piece is the result. It’s being shared now during a global pandemic, and it’s included in my soon-to-be-released collection, Mamabird. Lord, we need more poetry right now. We all have bread rising somewhere in our proverbial hearts. This anticipatory collective loss is unspeakable. Maybe a poem can point some flashlight your way, illuminate what is beautiful and broken in you, too. 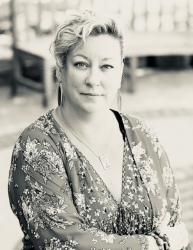 Katie Fesuk
Katie Fesuk, a Massachusetts native, teaches English in Marietta, Georgia and has earned degrees from the University of Georgia, Agnes Scott College, Kennesaw State University, and, most recently, the Etowah Valley MFA from Reinhardt University. Her new book, Mamabird, is available through Finishing Line Press as well as Amazon. Fesuk studied English and Creative Writing in the doctoral program at Georgia State University and was a Georgia Author of the Year Award nominee for her chapbook If Not an Apple (La Vita Poetica Press). She worked as Poet in Residence at The Walker School, served as Creative Writer in Residence at the Kennesaw Mountain Writing Project, and published poems that can be found in more than thirty journals including Five Points, Poet Lore, The Pedestal, Slant, Atlanta Review, and Wicked Alice.

Katie Fesuk, a Massachusetts native, teaches English in Marietta, Georgia and has earned degrees from the University of Georgia, Agnes Scott College, Kennesaw State University, and, most recently, the Etowah Valley MFA from Reinhardt University. Her new book, Mamabird, is available through Finishing Line Press as well as Amazon. Fesuk studied English and Creative Writing in the doctoral program at Georgia State University and was a Georgia Author of the Year Award nominee for her chapbook If Not an Apple (La Vita Poetica Press). She worked as Poet in Residence at The Walker School, served as Creative Writer in Residence at the Kennesaw Mountain Writing Project, and published poems that can be found in more than thirty journals including Five Points, Poet Lore, The Pedestal, Slant, Atlanta Review, and Wicked Alice.