My father moved out of her house without warning
as daffodil stems were throwing off bells, as the bells

of the church down the street kept forgiving.
In his apartment downtown, he studied his boxes

for purging. Outside, the sun held what it was hiding.
The a/c lurched on. Down below, on the beast of the road

a number of silvery trucks exerted in the slow nudge
of mundane routines. My dad’s lady friend called me.

Hundreds of miles away, I sat at my kitchen table
watching the pots and pans reflecting

the torn edge of dusk. Her voice scaled
and reverted with his familiar indications: the worship

of quarters, the strength of his appetite
for emotional errors. I may have laughed—

more like a pluck, an eventual falling
as I thought of the permanent space

he takes in my heart. Scabs over squandered zeroes.
That night, I was caught as she sobbed.

I was unmaking every way he closes a day.
Because I knew he would again claim her,

my mouth did not reply. For her sake,
I did not want to be right. I was certain

my father was reclined on his couch with his eyes
falling down at the corners. Because he cannot but flesh

love, cannot but mantle nerve, and never could force
right despite evidence, everything remains his

for the naming. On the 21st floor, the sharp wind
reckons his windows, but its grit and debris can’t reach

him. Elevators move floor to floor without anyone
in them. Another useless awareness, and one we’ll forgive.

Click here to read Lauren Camp on the origin of the poem.

Lauren Camp: The first several drafts of “Narcissus” dealt with two subjects: a very unexpected act that my father had taken in his love relationship, and a pulmonary test I was given to address difficulty with my breathing. At some point, I stopped trying to find the connective tissue to the two parts, and removed the hospital test from the poem. “Narcissus” became exclusively about a subject that continues to entrance me: my father. He is the most complicated person I know, and my emotions about him have run to each end of the spectrum.

I teach beginning creative writing and am forever pressing my students to add more detail. I took my own advice, encouraging the poem to open up to the architecture of the city and the space of his apartment, his face and the season. 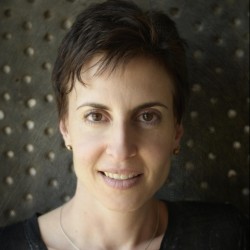 Lauren Camp
Lauren Camp is the author of three collections, most recently One Hundred Hungers (Tupelo Press, 2016), which won the Dorset Prize. Her poems appear in Muzzle, Linebreak, The Seattle Review, Beloit Poetry Journal and elsewhere, and her work has been translated into Turkish, Mandarin and Spanish. Lauren is a Black Earth Institute Fellow and the producer/host of Santa Fe Public Radio’s “Audio Saucepan,” which melds global music with contemporary poetry. www.laurencamp.com.