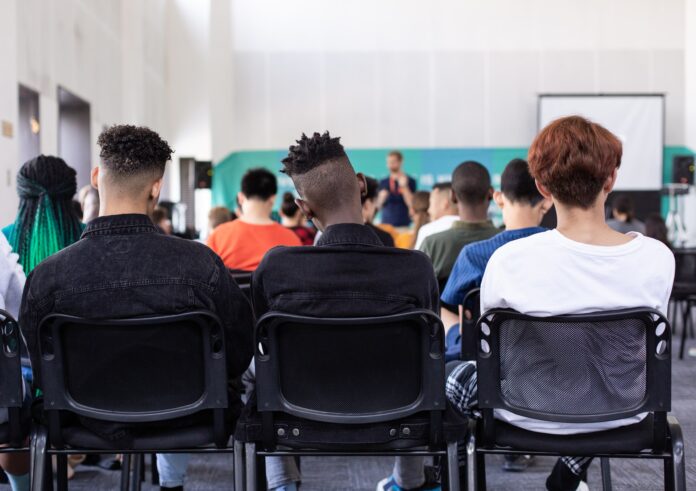 “what i learned during Black History Month”
by billy, age 8 (or 18)

Black people were slaves
who were set free by a king
named Martin Luther, after
he had a dream about sitting
in the back of a bus with a lady
railroad conductor—she
convinced him not paying people
was wrong. also, his brother
George—a farmer who
invented peanut butter,
the gas mask & the stop light—
was so good at baseball, he played
with the white kids at school
in front of the national guard.
sadly, Martin was shot
on a wintery street in Boston,
which started the war of civil
rights, the Harlem Renaissance,
and birthed president Obama.

none of us are even remotely surprised
after your class-shaking assault.
your non-rhetorical asking, “why
do we always have to talk about
all this women’s issues shit?”
your belief that it has no impact
on “real rapists.” as you forced
your flaccid point— a mouth-breathing
overcompensation—the young women
around you struggled to fight back,
hands stabbing the air, clawing desks
because your eyes were out of reach.
when, exhausted, they silently waited
for it to be over, you smirked. explained
they had nothing to worry about
if attractiveness measured their risk.
I was new in the building and young.
I tried to keep my responses measured,
professional. but began to write this poem—
a present for your cellmate, whose sister
was among the 1 in 6 who encountered
someone like you in college.

Click here to read Matthew E. Henry (MEH) on the origin of the poem.

Image: photo by Sam Balye on Unsplash, licensed under CC 2.0.

Matthew E. Henry (MEH):
A colleague of mine frequently comments about how we can think everything is going great in our classroom, how students are saying “all the right things” during a lesson, but we’re later disturbed by what they write or say. Both poems speak to different aspects of this reality.

“an open letter to the student who will be convicted of rape in the next 3-5 years” recounts an actual classroom experience. Looking back on the revisions of this poem, I’m most struck by how it became a direct address to the boy as I attempt to inform him of how his words landed on the women in the classroom—how assaulted they were. I tried to capture how little he cared at the time, as well as his rationale. Earlier drafts included the discomfort of the other young men in the room, but I cut those lines to focus on bringing the reader into the disgust in the room. I don’t know where this boy is now, but I hope he learned a lesson. In reality, I was a lot less “professional” in my reply than the poem indicates, but I still wish I had said more at the time.

Similarly, “what i learned during Black History Month” began in part from overhearing the butchering of some standard Black History Month factoid, and in part from reflecting on the how most schools discuss what they see as Black contributions to American culture in one of two ways. In younger grades, February becomes “Black people are cool!” as the curriculum is focused on inventions and innovations. As students increase in age, the focus shifts to the “Black people have overcome so much!” narrative, focused on Black trauma and/or Black voices protesting the causes of Black trauma. Often athletes, entertainers, and Obama are thrown into the mix to supplement either narrative. Either way, they become information that is rambled off and promptly forgotten, or seen as interchangeable, because who can tell them apart? If you’ve heard one Black lesson plan, you’ve heard them all. Being the only Black face in most of the classrooms I enter, these realities grate a little more profoundly, especially when students are receiving this instruction in the next room. 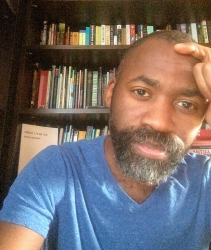 Matthew E. Henry (MEH)
Matthew E. Henry (MEH) is the author of "the Colored page" (Sundress Publications), and the chapbooks "Teaching While Black" (Main Street Rag) and "Dust & Ashes" (Californios Press). The editor-in-chief of The Weight Journal, MEH’s recent poetry and prose is appearing or forthcoming in Barren Magazine, The Florida Review, Massachusetts Review, New York Quarterly, Ploughshares, Poetry East, Shenandoah and Zone 3. MEH’s an educator who received his MFA yet continued to spend money he didn’t have completing an MA in theology and a PhD in education. You can find him at www.MEHPoeting.com writing about education, race, religion, and burning oppressive systems to the ground.