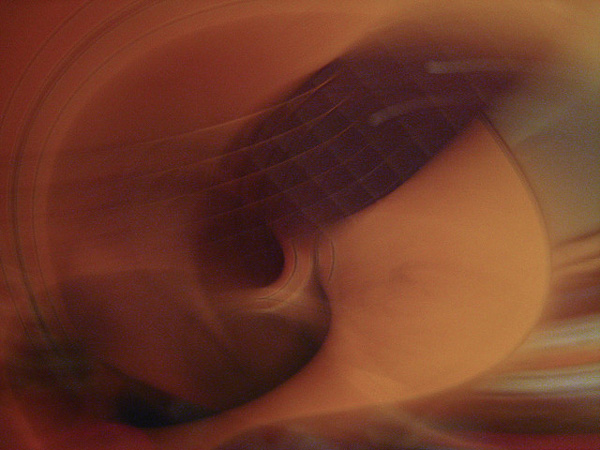 Your tongue is lightweight

Your lover in order to

You may be Shane

You to it without

Simply a glance away

Click here to read Vi Khi Nao on the origin of the poem.

Vi Khi Nao: I was watching some random cooking show and I was doing research on architecture buildings for my novel. I was also designing the floor plans for my protagonists. As I gazed back and forth between the structure of food and the cubistic building, my mouth was salivating and the poem, like the etymology of beauty, arrived to my consciousness not frame by frame but by one literary ceramic tile after the other. This was how this poem was composed. My tongue was behaving quite unlike itself – not humanly – but architecturally. And, this translates itself into another literary engine of existence, which is what the archi-etymological presence of this poem seems to drive its world on.

Photo “Guitar cameratoss” by Andrew Malone; licensed under CC BY 2.0

VI KHI NAO is the author of four poetry collections: "Human Tetris" (11:11 Press, 2019), "Sheep Machine" (Black Sun Lit, 2018), "Umbilical Hospital" (Press 1913, 2017), "The Old Philosopher" (winner of the Nightboat Prize for 2014) and of the short stories collection, A Brief Alphabet of Torture (winner of the 2016 FC2's Ronald Sukenick Innovative Fiction Prize), and the novel, Fish in Exile (Coffee House Press, 2016). Her work includes poetry, fiction, film and cross-genre collaboration. She was the Fall 2019 fellow at the Black Mountain Institute. vikhinao.com