Because someone has to go back, I return
to that boy showering unaware of his stepdad
listening at the bathroom door with its little hook
for the lock. The man decides he’s had it
with the wife’s kid, it’s time to get a stick.
Get out now, I tell the boy, daydreaming
of his crush on another, get dressed,
grab your smokes, a change of clothes,
the phone number of someone you love
who’s not related, run. Whether he can hear
right then doesn’t matter. One day
he’ll understand who he had to save.

I follow that stepdad with the plan
outside to the spring trees bending green.
I tell him, dead fifteen years now,
I found a way to forgive,
but stop anyway. Don’t transmit
your childhood — the axe through the TV
when you were watching Saturday morning cartoons,
and when you cried, the fists to your face.

One day his heart will break
over what he’s about to do. But today
he twists the green meat of a thick branch
until it snaps, strips the fresh bark
with his pocket knife like a hunter,
his heart and mind untouchable,
certain of the correction necessary.
Back inside, he rams the bathroom door,
the hook popping. He yanks open
the shower curtain, revealing the boy
who can’t tell what weapon of choice
the intruder holds dark and blurry.

I want to get in between the blind,
surprised boy, the screw-up who’s trying
to be his father, and take the hits.
The man’s shouting gibberish, the boy’s
trying to protect his dick, the switch
landing on his arms, chest, thighs,
stomach, shoulders, hard enough to sting
but bruise minimally. The man’s got enough control
not to hit his face, his hands, anywhere
those welts like a pox on the heart
can be seen. The way the pain settles
into softer flesh is the man’s way of saying
this boy’s spoiled life isn’t so bad.
He could’ve gotten the axe.

Photo: “Wood Sticks” by Ricardo Diaz; licensed under CC BY 2.0

Click here to read Michael Walsh on the origin of the poem.

Michael Walsh:
I spent many years learning how to write a short, lyric poem and saved my narrative impulses for fiction. But when I began to write “Switch or Axe “(and other poems like it), my friends kept telling me that I needed to stop writing lyric, metaphorical poems and tell the story. Often, straight, white male mentors had encouraged me to come at the subject sideways rather than dead-on. “My Papa’s Waltz” by Theodore Roethke, one of my favorite poets, takes such an approach with a caregiver’s physical abuse. I wanted to keep writing that kind of poem, but learning how to write differently was necessary to write the one you’ve read.

When writing a short lyric, I try to overwrite the poem and then cut what I call “numb narrative lines.” I define these lines as those that exist in the poem only to move an element one step further in a narrative order: maybe a change in place or time, or even a narrative element that makes two images cohere better. I ask: is there a way to completely eliminate the line, maybe by reworking the title? Can I just cut it and no one will know, even though it seems important to me? If the line is absolutely needed, can I revise this line to make it do more work than just the narrative task? Removing a numb narrative line can help move a poem out of chronological time and into cyclical time, which is where I think the lyric lives.
However, in a narrative poem, the elements I’d normally cut need to remain. The purpose is to move from scene to scene, develop a story in a sequence (not necessarily chronological), or show how a character develops or a scene progresses. Often, these numb narrative lines do necessary transitive work. They stop numbing the moment, but the moment isn’t the point.

Finally, specific to this poem, I deliberated how to return to and write about a psychologically distorting experience with a sadist. There was a desire to change the event in some way, make it right, or give false reassurance to the reader that everything is ok. I decided to allow the desire to enter the poem, but not for it to alter the past. 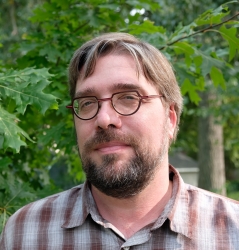 Michael Walsh
Michael Walsh is the author of The Dirt Riddles, which received the Miller Willams Prize and the Thom Gunn Award for Gay Poetry. In 2021 Autumn House Press will publish Creep Love, his next poetry collection, and, in 2022, Queer Nature, an ecoqueer poetry anthology. His poems and stories have appeared in journals such as The Alaska Quarterly Review, The Cimarron Review, Cincinnati Review, Crab Orchard Review, The Journal, North Dakota Quarterly, and Prairie Schooner.