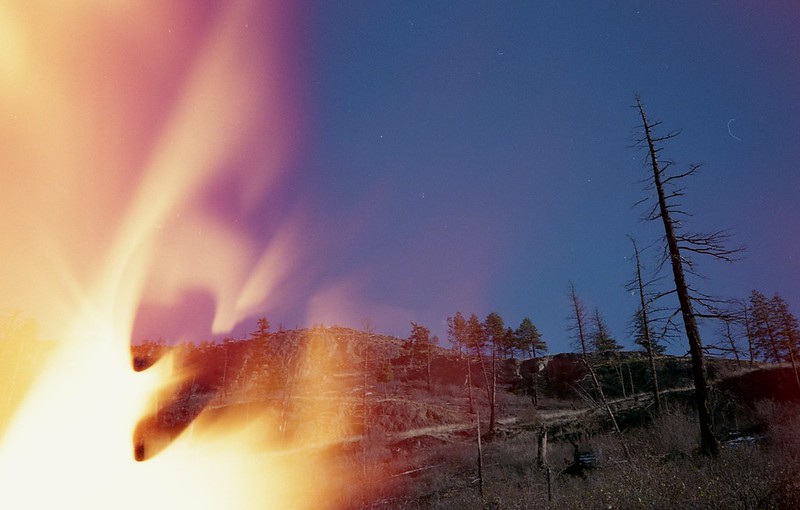 Day is blood-orange red
because fire possesses everything now,

because fire says, enough.
Rain is lost over the ocean.

Jump, says dolphin,
water and rocks will catch you. Believe me.

Air swirls into shadows.
The dead roil and spark.

Hurry, says shark. You must be hungry.
This is the best escape plan. Believe me.

Why burn, says owl, why not fly?
Too late, crow cries. Too late.

Touch me, says cinder. Hold me.
I will grab you by hair and skin, says fire.

Deer stops running to look at you.
It says nothing.

You breathe and vomit smoke.
You run.

Click here to read Pat Hanahoe-Dosch on the origin of the poem.

Image: “As a fire burns a forest” by Crusty da Klown, licensed under CC 2.0.

Patricia Hanahoe-Dosch:
This poem was a response to the really bad fires in California a few years ago, and Trump’s response/nonresponse to the fires and climate change. Unfortunately, more and more terrible fires are burning all over the world now thanks to climate change, and we still aren’t doing much about it. Pat Hanahoe-Dosch
Pat Hanahoe-Dosch’s poems have been published in The Paterson Literary Review, Rattle, The Atticus Review, Confrontation, Conjunctions, Rust+Moth, American Literary Review, among many others. Her books of poems, The Wrack Line and Fleeing Back can be found on Amazon.com or the FutureCycle Press website. She earned an MFA in creative writing from the University of Arizona and currently teaches writing and literature at a community college in PA. Her short story, "Sighting Bia", was selected as a finalist for A Room of Her Own Foundation's 2012 Orlando Prize for Flash Fiction. Her short stories have been published in The Peacock Journal, In Posse Review, Sisyphus, Manzano Mountain Review, and The Schuylkill Valley Journal. One of her stories was nominated for the Best of the Net award, 2018. Her nonfiction articles have appeared in various journals as well.