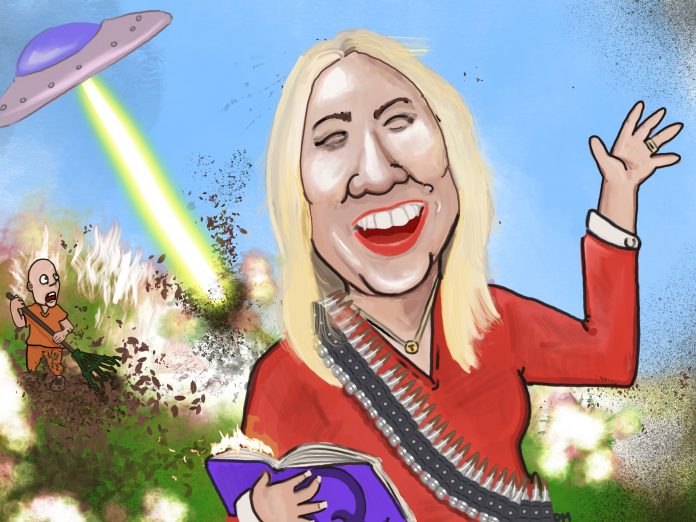 Marjorie Taylor Greene now represents my home state of Georgia in the U.S. Congress. Unfortunately, radical far-left transgender communists in the Deep State have revoked her appointment on the Education and Labor Committee. To make up for this regrettable decision, I have developed in her honor The Greene New Deal for Education. It will finally help answer the question originally posed by George W. Bush: “Is our children learning?” Or more to the point, “What is our children learning?”

The Greene New Deal will emphasize the teaching of science. The sheeple have had their minds warped by fake “science experts” who say that “global warming” is increasing fires. That’s ridiculous. It snowed in Minnesota last January. As the real winner of the stolen election, President Donald J. Trump, has told us, dead leaves are the primary cause of forest fires.

This points to a simple plan of action: rake the forest floors down to the dirt. The Greene New Deal includes prison education. Rather than funding Operation Clean Sweep with some socialist taxation hoax, this plan issues inmates rakes at their own expense, and has them do “experiential learning.”

But that’s only the earth-bound part of the problem. George Soros’s space lasers still leave our forests vulnerable to giant fire-beams ignited by a massive space menorah. In the Greene New Deal Science Curriculum, students will work on ways to extinguish these lasers with gigantic space-based hoses, which will double as crucial weapons in the Space Force.

Gender studies are a major emphasis of the curriculum. In contrast to the propaganda spread by the Antifa-inspired Me Too movement, students will memorize Mrs. Greene’s finding that white men are the most oppressed group in the U.S. Our children and youth will learn about the challenges that white men face in society, and how to help them finally have equal opportunities for success.

Empathy is also a character value emphasized in the curriculum. Students will study Rep. Greene’s record of seeing the world from the eyes of people different from herself. A key text will be her declaration that if she were Black, she would feel proud to see a Confederate monument, because it symbolizes the progress that Black people have made since the Civil War. We all know that white women offer the world’s greatest empathy towards anyone who is “the other,” understanding their lives and world views, and tolerating them.

Civil Rights are an important area of U.S. citizenship, and they will be centered in our new national curriculum. Here in Mrs. Greene’s home state of Georgia, the law allows private citizens to arrest someone if a crime is committed in their presence or “within their immediate knowledge.” If the crime is a felony, the good citizen can use whatever means are necessary to stop the miscreant from escaping based on “reasonable and probable grounds of suspicion.”

This excellent law enables each of us to arrest, or if necessary, shoot, someone we think might have committed a crime. The important thing is liberty, which must be emphasized at all levels of schooling. These liberties include the right and responsibility to bear arms in school. This allowance will prevent hoax school shootings from being perpetrated and emphasize the constitution’s key element, the Second Amendment. Teachers will be issued gun permits on hire, and gun racks will be installed in each student’s locker.

Economics classes will help students see the absurdities of socialism and the infallibility of laissez-faire capitalism. This emphasis will help students encourage their parents to vote against any taxation plans promoted by far-left socialist radicals who propose funding for schools.

The Greene New Deal will have a hidden benefit: It will not require books! Books have been responsible for all sorts of dangerous ideas, and they will not be required for learning. All essays, such as this one, will be banned and replaced with Greene-screened YouTube videos.

In law classes the Greene New Deal will have students study the murders of political opponents by the Clintons, funded by the Clinton Foundation. Especially the downing of the plane flown by John F. Kennedy, Jr. to eliminate competition for Hillary’s coronation as Queen, using George Soros’s space laser technology unconstitutionally created by Bill Gates. This sort of cross-disciplinary investigation will help break students out of their academic “silos” and see the world in all its complexity.

Technology is a big issue in today’s schools, and the Greene New Deal has that covered in its attention to the Voice of God technology. This nefarious device was created by the government to implant chips in people’s heads to control and monitor their thinking. Students will learn to ferret out those whose minds are controlled by the Voice of God implants and either re-educate them, report them to the proper authorities, or exercise 2nd amendment rights on them.

In engineering classes, students will engage in problem-solving activities, such as draining swamps.

Most importantly, the Greene New Deal will restore Christian values in schools and expel those advocating for Alexandria Ocasio-Cortez’s Sharia Law and miscegenation between the races, especially that involving Jewish people. This move will help reduce the disappearance of children who have been abducted by Satan-worshipping Muslims in the Deep State to feed the blood-drinking rituals of George Clooney and Bernie Sanders. Sharia Law will be replaced with the religious texts that correctly prophesized the first and second elections of President Trump.

Students will learn how voting machines were programmed to turn Republican votes into Democratic votes in the 2020 election and learn the technical skills to reprogram them to produce the proper outcome. Undoing the work of the Rothschilds, Meryl Streep, Deep State Antifa conspirators, Black Lives Matter traitors, and U.S. Postal Workers under the sway of Robert DeNiro and Malia Obama will nullify the stolen 2020 election results. The accompanying firing squads will also restore law and order for President Trump’s second term.

Above all, the Greene New Deal will emphasize Patriotism. Music classes will celebrate the values embedded in country and western music. Writing instruction will focus on the Twitter stylings of Donald J. Trump. New dress codes will require camouflage designs. Facemasks will be discouraged, save those with slogans such as Stop the Steal, Censored, and Trump Won.

This curriculum provides the right educational program for these times. It’s time now to take action and Make America Great Again with the Greene New Deal for Education. 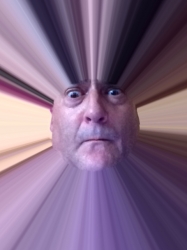 Peter Smagorinsky
Peter Smagorinsky recently retired from his position as Distinguished Research Professor in Language and Literacy Education at The University of Georgia. His retirement projects include ending the global pandemic, achieving World Peace, herding cats, and climbing to the bottom of the Atlantic Ocean.