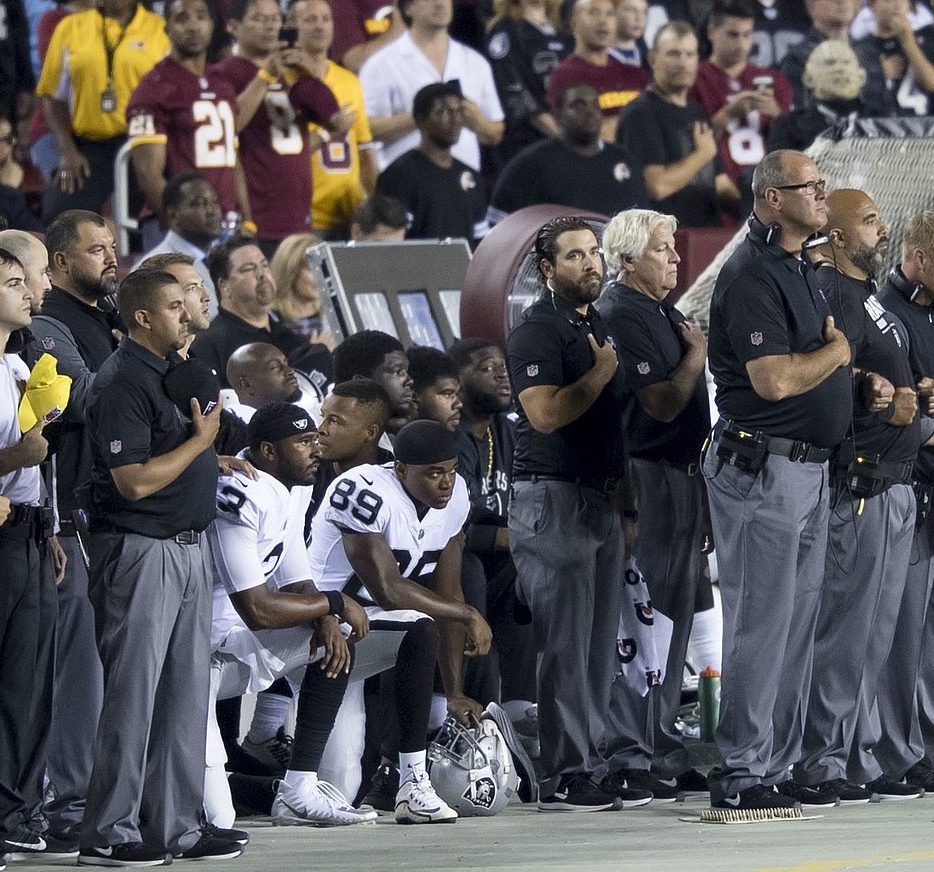 As I watch the line of men drop to their knees, refusing to praise

the God of country, the most jealous and vengeful God of all,

I am thinking of the bitches. The bitches that poured love

into their sons’ bodies, that took in pain like the mournful note

of an expanding accordion, the bitches who trace the half moons

of their C-section scars whenever they see another son slaughtered,

life into their lives. I imagine those bitches peeled the potatoes, hummed

in the bleachers at home games, cheering, That’s my baby!

with such a pride that their sons started to think their bodies mattered.

Maybe those bitches warned them, or maybe they didn’t have to,

that the beer guzzling crowd will adore everything their bodies

can do for them, will roar when they sprint across the field

like meteor showers, will collapse into ecstasy with every touchdown,

but they will not love a body that doesn’t bow to compliance.

I wonder what the bitches think when they see their boys

on their knees, their moment of prayer that demands that anthems

be held accountable to their promises. My mother would not be called a bitch

because of the lessons she taught me: that the people in the Middle East

were brainwashed to think their country is chosen by their god,

that people that lived in communism were too afraid to overthrow

their governments or even speak ill of them, that we were the only country

in the world that was truly free and righteous. We lie to our children

so that we can lie to ourselves comfortably as adults. America’s

greatest triumph: we will worship the flag even when the flag

becomes a shroud. I’m sure the bitches know this. The men on their knees

certainly do, as the president that we haven’t even attempted to overthrow

says that their jobs should be taken from them, calls their mothers

bitches, assures there are good people marching for white supremacy,

and promises to break the will of their bodies through law and order.

And we watch, knees locked and hands on our hearts, as bullets tear

through the bodies of these sons of these bitches,

as they are on their knees with their hands in the air,

as the bitches drop to their knees in front of their coffins,

and as the sons refuse to perform allegiance to our apathy,

silently taking the knee and bowing their heads, while the lens of history

flashes to capture another moment of our collective shame

and the bitches bear witness to the quiet defiance their love bore.

Click here to read Anne Champion on the origin of the poem.

Most rational people were appalled, but not surprised, to hear the news that Trump said he wanted to “Get those sons of bitches off the field” in regards to the NFL protestors. As a feminist, I’m constantly thinking about the sly ways that the language we use serves patriarchy and ensures misogynist social values: the casual usage of referring to women as bitches is a major culprit. However, in this case, the oppression goes further, as the “bitches” referred to are primarily black women. As Malcolm X asserted, “The most disrespected woman in America is the black woman.” As I thought of this, it made me think of all the mothers who raised the men who were now showcasing such brave defiance, and I began to wonder about the lives of these women. I decided to write the poem using the term bitches instead of women throughout, so that we could identify who we were really talking about when we say that word, and hopefully, that we feel shame over using it so cavalierly. I hope the poem reveals the respect I believe these women deserve for their perseverence in the face of such horrific injustices. After I wrote the poem, I read that Colin Kaepernick’s mother, Teresa Kaepernick, tweeted a response to Trump:  “Guess that makes me a proud bitch!”

Anne Champion
Anne Champion is the author of The Good Girl is Always a GhostReluctant Mistress , and The Dark Length Home.Her poems have appeared in Verse Daily, Prairie Schooner, Salamander, Crab Orchard Review, Epiphany Magazine, The Pinch, and elsewhere.She was an 2009 Academy of American Poet’s Prize recipient, a Barbara Deming Memorial grant recipient, a 2015 Best of the Net winner, and a Pushcart Prize nominee.