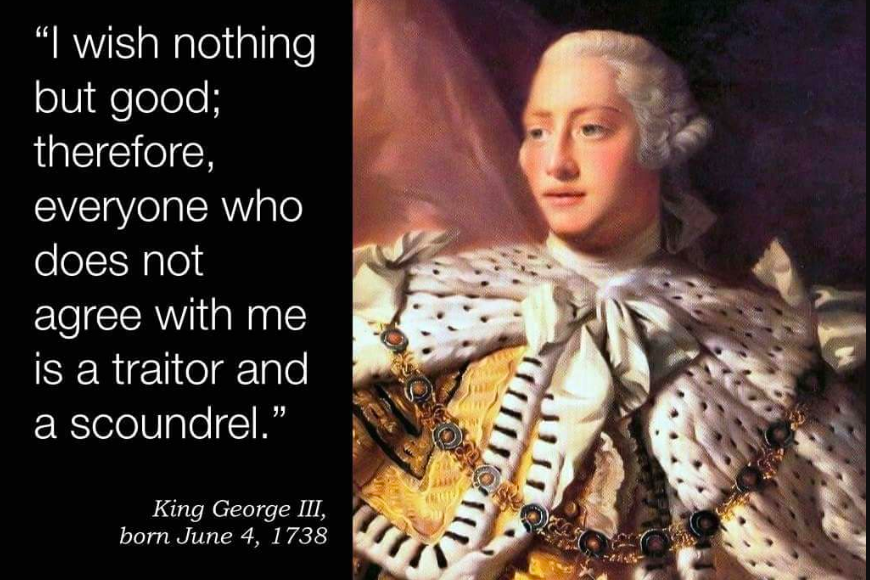 The British king’s efforts to establish “an absolute Tyranny” over the 13 original colonies led to the Declaration of Independence in 1776. In it, Thomas Jefferson minces no words: “whenever any Form of Government becomes destructive…it is the Right of the People to alter or to abolish it.”  Abolish it they did.

I wonder then how the Americans of 2019 will deal with another wannabe tyrant—this one living not in a London palace but in the White House.

Yes, to a remarkable extent, President Donald Trump’s slogan of “Make America Great Again”—which people have noticed invokes a vague past—points all the way back to King George III. Here are half a dozen of the Founders’ grievances against the King laid out in the Declaration of Independence and their Trumpian parallels:

♣ George III “combined with others to subject us to a jurisdiction foreign to our constitution.”

The Trump campaign? As the Mueller investigation showed, it “welcomed” help from the Putin regime to “benefit electorally from information stolen and released through Russian efforts.”

♣ George III refused “his Assent to Laws, the most wholesome and necessary for the public good.”

Trump refuses to support the constitutionality of the Affordable Care Act against a suit that could result in over 20 million American citizens losing healthcare coverage. Further, the Trump Administration has refused to ban chlorpyrifos, a pesticide E.P.A. experts link to developmental delays in children, despite the Food Quality Protection Act. What is more important to the public good than public health?

♣ George III obstructed “the Laws for Naturalization of Foreigners; refusing to encourage their migrations hither.”

Trump tried to unconstitutionally ban Muslims from entering the country. He’s expressed opposition to immigrants from “shithole countries.” He’s also instructed the commissioner of Customs and Border Protection not to admit refugees despite the law permitting them to apply for asylum. The Founders understood only too well that America gained strength from its immigrants; Trump doesn’t.

♣ George III made “Judges dependent on his Will alone for the tenure of their offices.”

Trump appoints judges who are loyal to him and his wishes above all. When Supreme Court nominee Neil Gorsuch said he found Trump’s attacks on the federal judiciary “disheartening” and “demoralizing,” the president reportedly threatened to rescind his nomination; the president feared Gorsuch would not be “loyal.”

♣ George III was guilty of “cutting off our Trade with all parts of the world.”

Trump has done the same with tariffs not only on Chinese imports, but even on those from Canada and other close allies. As a result, American exports decreased year-over-year in Q2 2019 even before the full effect of Trump’s trade policy has taken effect.

♣ George III being “a Prince, whose character is marked by every act which may define a Tyrant,” was, according to the Declaration, “unfit to be the ruler of a free people.”

Trump has said, “I have the right to do whatever I want as president,” which comes perilously close to the textbook definition of a tyrant. And like a prince, he seems to endorse hereditary rule and surrounds himself with a court of family members. He has referred in a tweet to the “Age of Trump” and has asked, “Do you think the people would demand that I stay longer” than two terms? His campaign manager Brad Parscale recently asserted, “The Trumps will be a dynasty that lasts for decades.” Stories pop up regularly citing presidential daughter Ivanka’s presidential ambitions.

In a striking historical coincidence, Duke Georg of Hanover moved to Great Britain from Germany in 1714 when he inherited the British throne. He anglicized his name and became George I, great-grandfather of the despotic George III. In 1885 Friedrich Trumpf left Germany and entered the United States. He anglicized his name to Frederick Trump and became grandfather to our current president.

Are the analogies between King George’s sins and President Trump’s too far-fetched? If only. As Mark Twain once said, “History doesn’t repeat itself, but it does rhyme.”

This past May Representative Bill Pascrell, Jr., a member of the House Ways and Means Committee, said, “We don’t have a kingdom, regardless of the imagination of some public officials…. Let’s not play games anymore.”

The fifty-six signatories of the Declaration of Independence pledged “our Lives, our Fortunes, and our sacred Honor” to overturn tyranny. We know the weapons wielded by Trump— attacks on the press, a blind eye to foreign interference with social media, opposition to laws strengthening ballot security, over 12,000 lies, and voter suppression. What are today’s Americans willing to do to counter them? Will they campaign state-by-state for ballot security and against voter suppression? Will they get out and support candidates who stand for truth and democracy?

And most important of all, will they vote in large enough numbers on November 3, 2020 to defend what really makes America great?  We shall see. 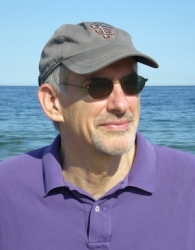 Keith Raffel
Keith Raffel monitored the activities of the CIA, NSA, and other three-letter agencies while counsel to the Senate Intelligence Committee. He’s also run for Congress, founded an internet software company, managed a DNA sequencing business, and published five thrillers. A longtime resident of Silicon Valley, he is now a resident scholar at Harvard.